For the whiskey lover in your life, these Crown Royal Cupcakes are infused with the bold flavor of Crown Royal and filled with chocolate! Decadent and delicious!

An ideal dessert option that serves beautifully, wows a crowd, and is rich in that Crown Royal cake flavor you desire.

I am in love with my chocolate cake recipe.  It is so versatile.  I mean seriously. I’ve made this chocolate cake so many different ways now.  It’s gone mocha/coffee, dark chocolate, Guinness, cream, and now Crown Royal Reserve.

I love the fact that just replacing this one ingredient, substituting just this one aspect of the cake can change the flavor so drastically.  It’s amazing!

Guinness Bailey’s Biscoff Chocolate Cupcakes are another delicious option you may enjoy instead.  Loaded with flavor, they have just enough alcohol in the background to add that special “kick” you want.

You also can’t go wrong with my simple drunken chocolate cupcakes recipe.  As you can see, I love a good boozy cupcake!

Can I Make These Hennessy Cupcakes Instead?

The cupcakes I made today are full of Crown Royal Reserve flavor.  The aroma of the batter was extremely intense and tasted so incredibly delicious.  The whiskey flavor was strong, but not overpowering.

That said, if you prefer Hennessy over Crown Royal, you can easily substitute it in this recipe.  Just remember that different liquids can change the consistency of your batter.

Check the thickness of the batter once you’ve added about ¾ the amount listed and then add in more if needed.

Do These Cupcakes Need Chocolate Cream Inside?

Inside these cupcakes is a spiced chocolate cream I had leftover from the pumpkin spice cupcakes I made last week.

I just whipped it up until it was smooth, then added a tablespoon of Crown Royal to it and it was silky, smooth, and perfect to fill these cupcakes.

Without the cream, the cupcakes are a delicious chocolate cake, but really lack that hint of whiskey that packs the flavor punch you want.

You can also use the whipped milk chocolate ganache from this recipe for chocolate cupcakes as a great filling for these whiskey-flavored cupcakes.

Are These Crown Royal Cupcake Safe for Kids to Eat?

In a word, no, they are not.  The crown royal is added not only to the cream filling, but to the icing, and as such, it is not cooked down.

So, these cupcakes are definitely ones you would only share with the adults and need to limit consumption of because they do contain alcohol.

Instead, serve the kids these yummy Red Velvet Oreo Cupcakes instead.  Just as delicious, with no alcohol so totally safe for them to indulge in with abandon.

Kids deserve to have a special treat just like the adults, just make sure it is safe for them to consume.

What Icing is Best for a Crown Royal Cake Cupcake?

Topping these cupcakes is a cream cheese frosting with nothing but Crown Royal Reserve as the flavoring.

They are also garnished with a dollop of the same chocolate cream as in the middle of the cake.

This is my personal favorite combination, but a basic cream cheese frosting is a great choice, as well as any chocolate buttercream or even a cinnamon buttercream.

They are all great choices with the richness you want that compliments the chocolate cupcake easily. 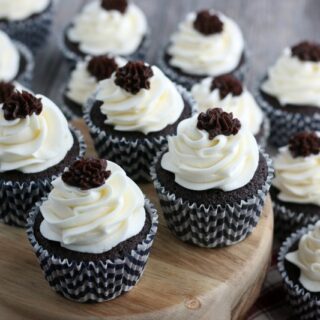 Dark Chocolate Cream for the filling

Hi, I made these and I had GREAT reviews, my question is, could I substitute Crown for Hennessey? Would the alcohol volume difference cause an issue in baking and instead of 3/4c of alcohol could I add 1c or would that change the consistency of the cupcake? Thank You!

Roddy - Yes - you can use whatever alcohol you want!! However, be careful when replacing the amount of liquid. Check the consistency of your batter after 3/4 cup and see how thin it is. :) Happy baking!

These sound great! Can I omit the cocoa powder and use vanilla for vanilla flavored Crown Royal cupcakes?

I didn't make the filling but I will say I was the talk of the party! So so so so delicious!

Hello! These cupcakes look delish! Do you need vanilla for the frosting? Just making sure it wasn't left out by accident. I'm making a birthday cake for my friend! Thanks for sharing!