I never thought I’d be a food blogger, let alone a world traveler. But since I have found myself in a dream world being both of those things, I noticed that I have acquired a slight obsession for trying cupcakes in every city I visit.  If I can’t find cupcakes, then I’ll try cookies, cake, macarons or any other confection I can get my hands on! 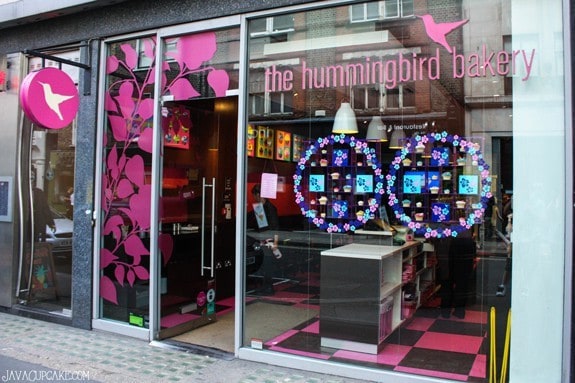 So far, I’ve had cupcakes in Seattle (and surrounding cities), WA, Las Vegas, NV, Portland, OR, Nuremburg, Berlin, Munich & Frankfurt, Germany, Salzburg, Austria, Zurich, Switzerland, Paris, France and now London, England! I haven’t written reviews for absolutely every bakery I’ve been too, but you can read all about the places I’ve written up HERE!

This past June, I went on a short excursion to London, England with my husband.  Yes, just me and the husband, no kids.  We left them at home in Germany with my dad who was visiting from Seattle, WA.   Before we left on our trip, I knew I had to, at the very least, visit The Hummingbird Bakery… one of the most famous cupcake bakeries in London!  Dave and I went to the bakeries store in Soho, since it was the closest to our hotel and easiest for us to get to! 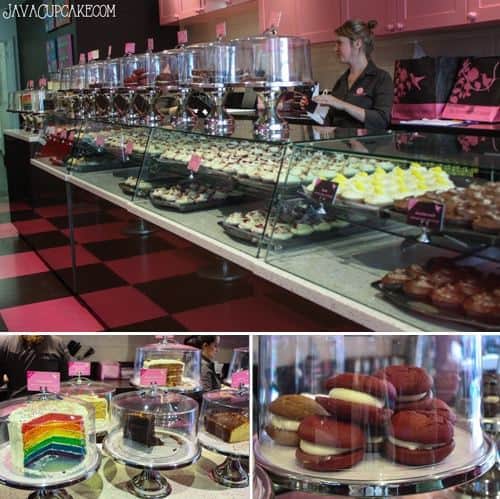 When I first walked through the door of The Hummingbird Bakery, I was immediately greeted by rows and rows of beautiful cupcakes!  I squealed like a little girl in delight.  A kid in a candy store?  Nope, I was a food blogger in a bakery!  I asked if I could take pictures and then started snapping away!

I will have to say though, I was a big disappointed in the selection of flavors in their case.  Although they did have the classic flavors such as vanilla and chocolate and a few others like carrot cake and black bottom cupcakes, their variety was lacking.  They did, however, have an enormous amount of red velvet cupcakes and according to the sweet lady behind the counter, they are their best seller! 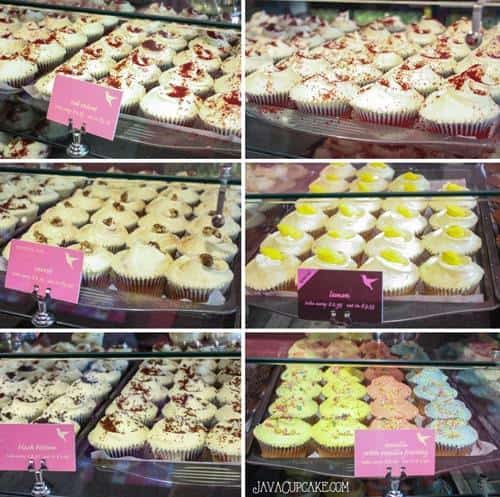 Not only did The Hummingbird have cupcakes, but they also sold beautiful full-size layer cakes.  They had at least 6 cakes on display including a surprise-inside rainbow cake!  The bakery also served whoopie pies and other cookies.  If I had a stomach the size of a football and the highest metabolism known to man, I would have tried one of everything.  *sigh*  But, I don’t… so my husband and I chose four of our favorite flavors to test!

First up for sampling were the Black Bottom (left) and the Chocolate Chocolate (right) cupcakes. 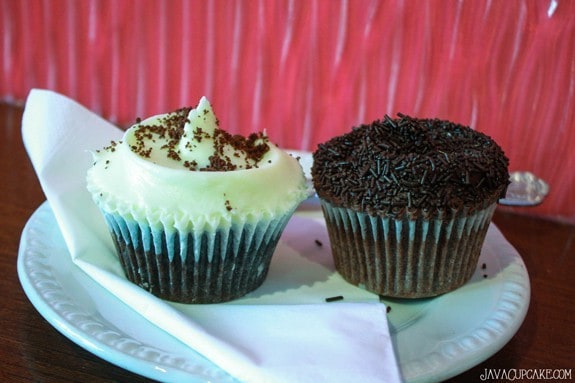 The Black Bottom cupcake was simply amazing.  The inside of the cake part had chunks of white chocolate and cheesecake in it and was topped with a cream cheese frosting.  It was perfectly moist, full of great flavor and so delicious!

The chocolate chocolate cupcake was okay… not the best chocolate cupcake I’ve ever had, but I’d eat it again if someone put it in front of me.  The frosting was a traditional American chocolate buttercream and was super smooth and light, which I liked.  The cake itself was a bit dry, but still had good flavor.

Next up was a lemon and a classic vanilla vanilla cupcake. 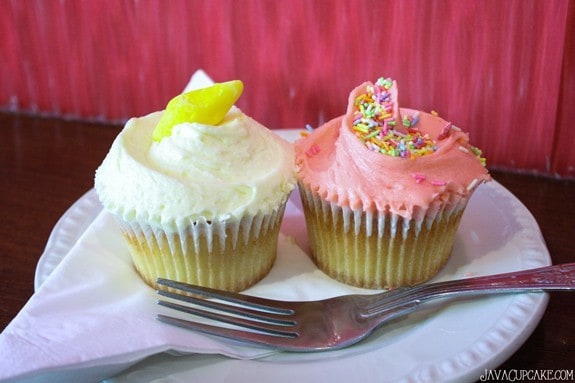 The lemon was OMG AMAZING.  The cake was moist, had great tart, lemon flavor and was topped with a tangy lemon cream cheese frosting.  It was perfect.

The vanilla vanilla cupcake, which I chose with pink frosting and sprinkles (because you know sprinkles makes everything better) was a great example of how a vanilla cupcake should be done.  The cake was moist, the frosting wasn’t overly sweet and it actually tasted like vanilla!

Overall, I enjoyed the cupcakes at The Hummingbird Bakery!  I have tired a lot of cupcakes, and these definitely come close to American style cupcakes!  However, they weren’t completely perfect.  The cupcakes themselves were a bit small, the cake didn’t reach the top of the liners which was a bit disappointing when I paid almost $5 a cupcake.  I would also liked to have seen more variety of cupcake flavors in their case, the lack of choices was a disappointment. 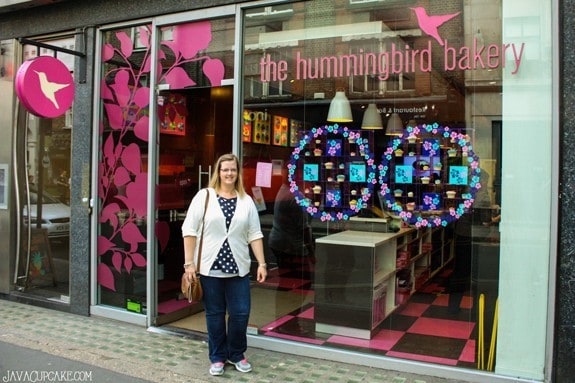 I’m giving away a little swag I picked up along my travels to one lucky reader! One person will win The Hummingbird Bakery Cookbook and a Lola’s Cupcakery coffee mug! Simply fill out the form below! You must be 18+ to enter and have USA or Europe mailing address. Each week, with each new review, you’ll have a chance to enter again to win! So keep coming back!

Have you been to The Hummingbird Bakery in London?
I’d love to hear what you thought of their cupcakes!

Stay away. Simply the wrong bakery.

The offered solution was to collect from one of its shops - far away from place the day after!

No refund policy or a voucher to use another day for a cake.

When I spoke with the customer service they replied that this is the company policy.

If you don't want to ruin any birthday celebration. Stay away from this company. Extremely disappointing.

Love your reviews!!! I take notes of everything!!! Thanks so much for sharing! :)

I have been to only a couple cupcake bakeries.

I went to my first ever Cupcake Bakery in OKC, OK at Pinkitzel. I loved the entire store. I walked out with some Pink Lemonade Cupcakes and Chocolate Salted Carmel Cupcakes. Both were delicious!

Where I live, there are 3 cupcake shops. I've been to them all. I also visited babycakes in downtown Disney

Where do you live, Cindy? What did you think of the shops in your neighborhood?