When a cupcake blogger takes a trip to New York City for the first time, it’s written in the rules that she’s got to visit the place that started the entire cupcake craze… Magnolia Bakery. 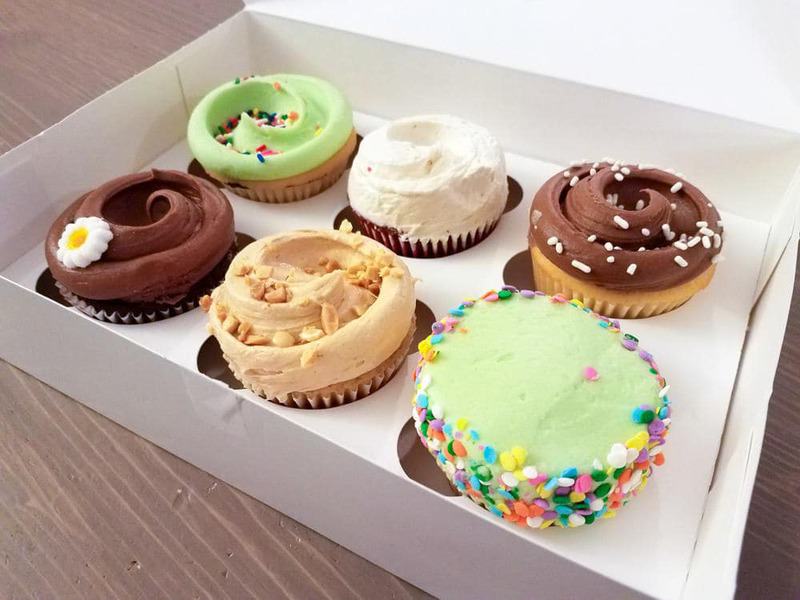 Feb 2-5, 2017, I took my first trip to New York City!  On my bucket list was to visit the birth place of the cupcake craze… Magnolia Bakery! 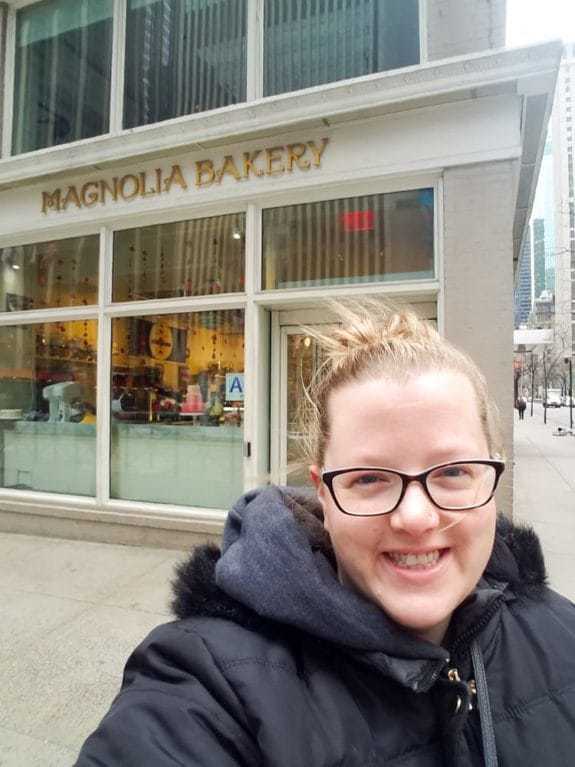 Now, you may be asking how did Magnolia Bakery start the cupcake craze?  Well, it all started with Sarah Jessica Parker of Sex and the City filmed a seen for SATC outside Magnolia eating one of their cupcakes.

Instantly, the country became crazy for cupcakes and the sweet revolution began!

My trip to Magnolia Bakery took place early on a Sunday morning.  I hopped in a NYC taxi cab and whisked across town to the bakery.  It was quiet in NYC, so I got there quick and there was no line to get inside.  I picked a perfect time to visit. 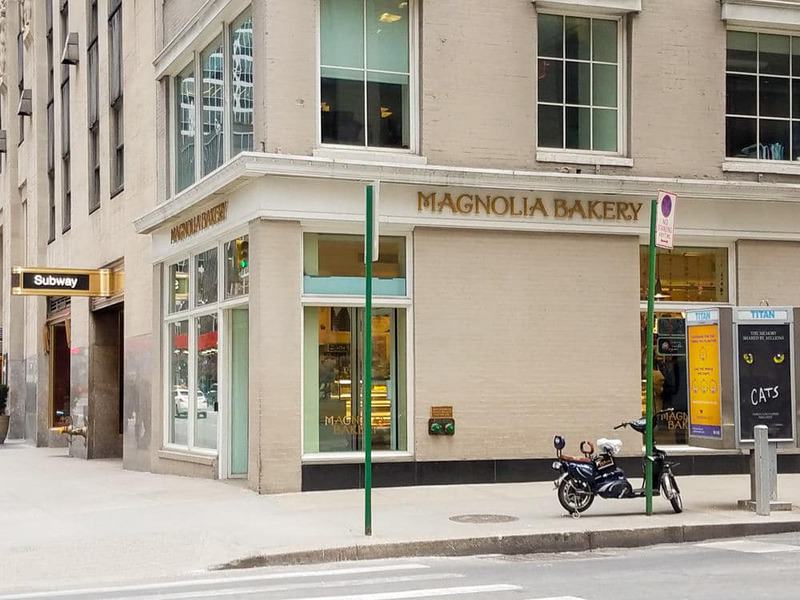 The front of the bakery was filled with pastel colors, bunting, and lots of decor for Valentine’s Day.  The only thing lacking were a few tables and chairs to enjoy a cup of coffee and a cupcake. 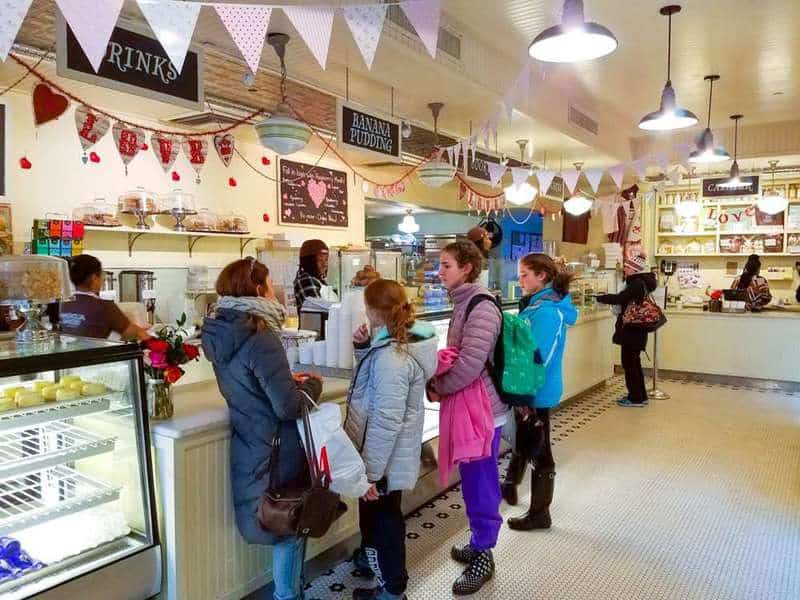 Immediately, I went straight for the case of cupcakes!  Three cases filled with the regular flavors plus the Sunday special.

It was hard to choose which ones I wanted to take home to the family to try! 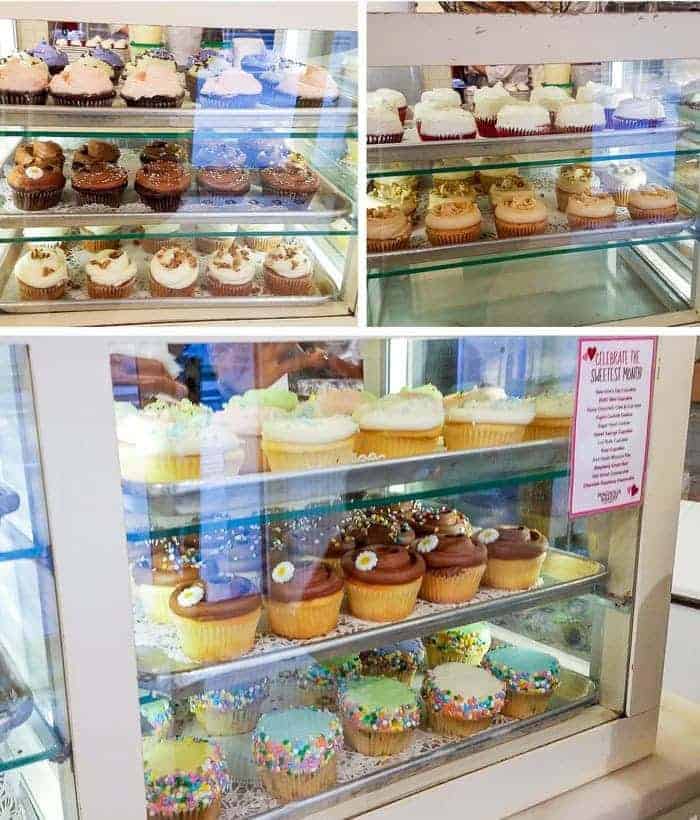 I knew for sure I needed a funfetti cupcake for Matty, I wanted PB&J, and the remaining I’d get a variety so I could get a general feel for the flavors and textures of their cake & frosting.

As soon as I got home from my trip, I couldn’t wait to open the box and dig into the cupcakes! 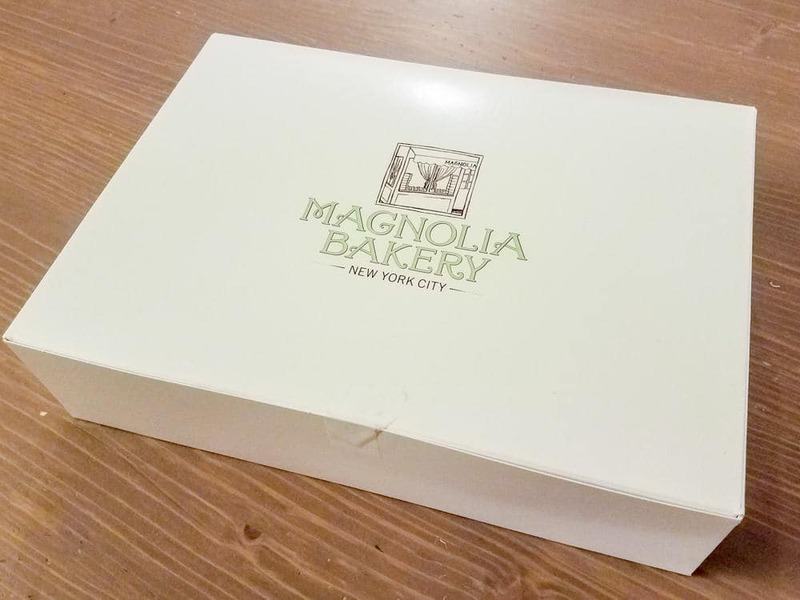 When I try cupcakes, I share with my family.  So we all sat around my coffee table and we got to sampling!

First up was the Funfetti Cupcake! 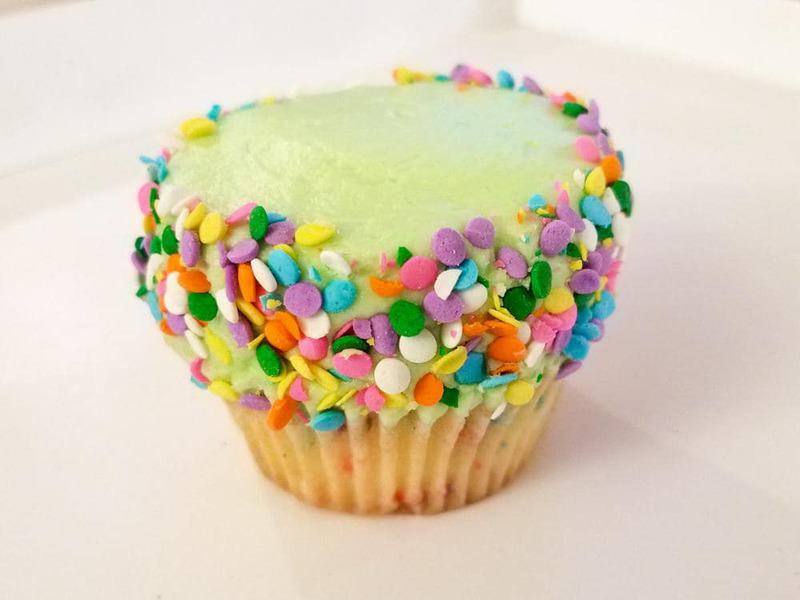 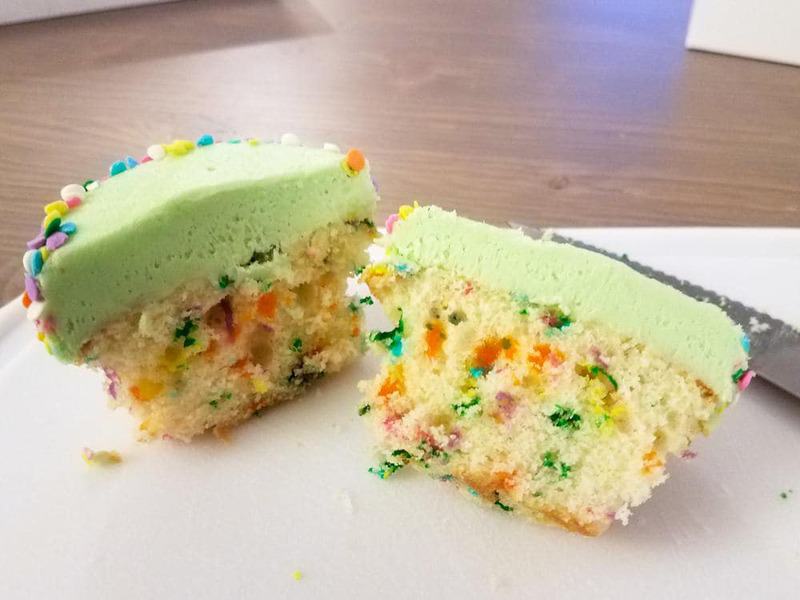 The cake was moist and the buttercream sweet!  Matty LOVED this cupcake and I have to say I was a fan too!

Next up was Red Velvet! 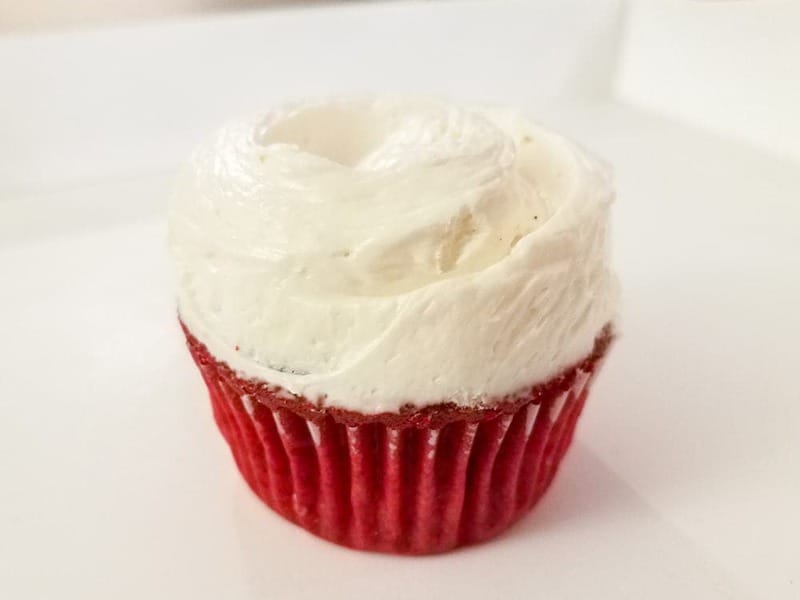 Mahonia’s red velvet cupcakes are made red with cocoa, vanilla and a little southern mystery, with its own special whipped vanilla icing.

The whipped vanilla icing was so smooth and creamy.  One of the smoothest icing I’ve ever had actually.   This was a solid red velvet cupcake. 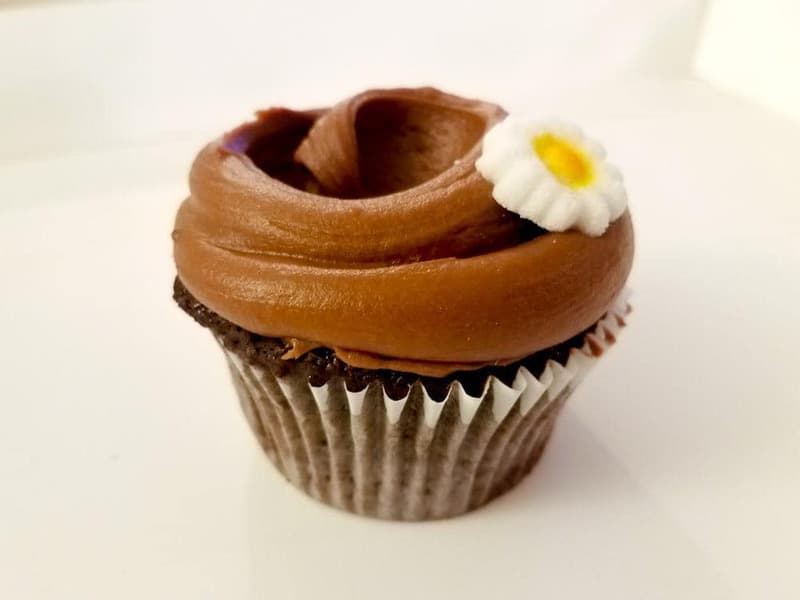 The chocolate buttercream tasted like fudge and was my favorite part about this cupcake!

Next up…. Vanilla Cupcake! 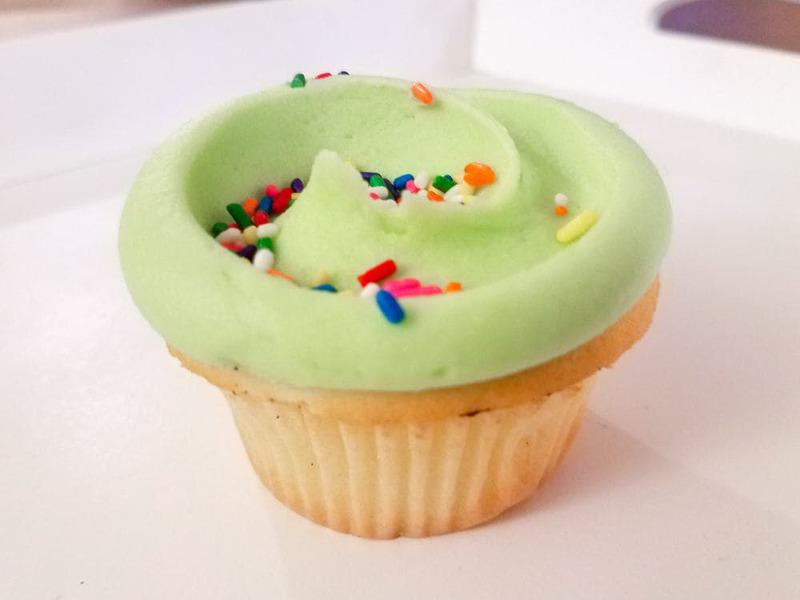 This old-fashioned vanilla cupcake with vanilla buttercream topped sprinkles did not disappoint.  If you’re looking for a great basic cupcake, Magnolia Bakery does a great job at that!

My favorite is up next… Peanut Butter & Jelly. 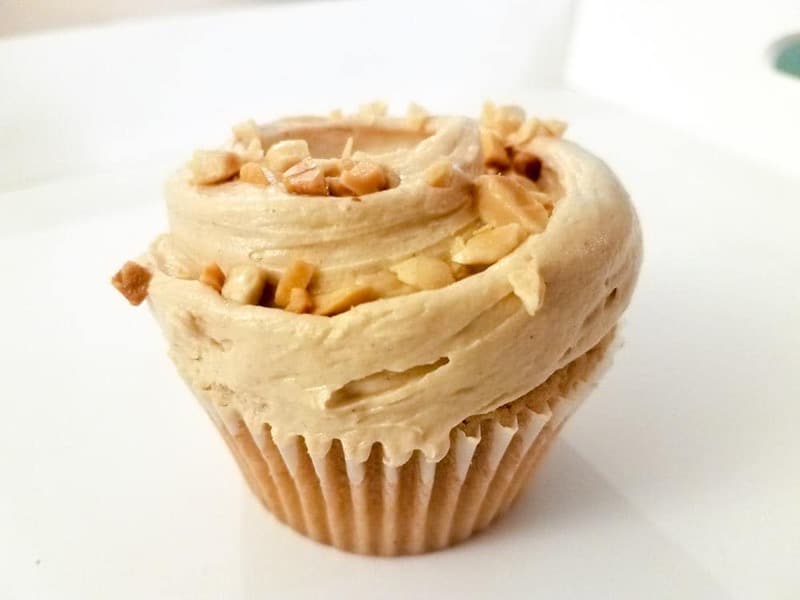 This cupcake was made with a peanut butter cake filled with jelly and topped with peanut butter buttercream and chunks of peanuts.  The frosting was packed full of peanut butter flavor without being too thick or rich. 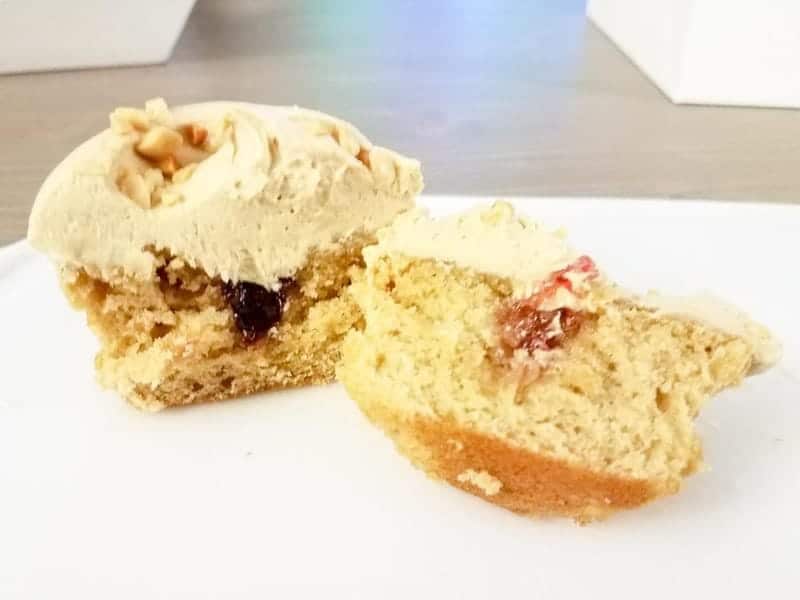 The only thing I would change about this cupcake would to have more jelly filling.  I only got one or two bites with the jelly and I would have liked to have every bite include the jelly.

Last but not least, the Vanilla Chocolate Cupcake. 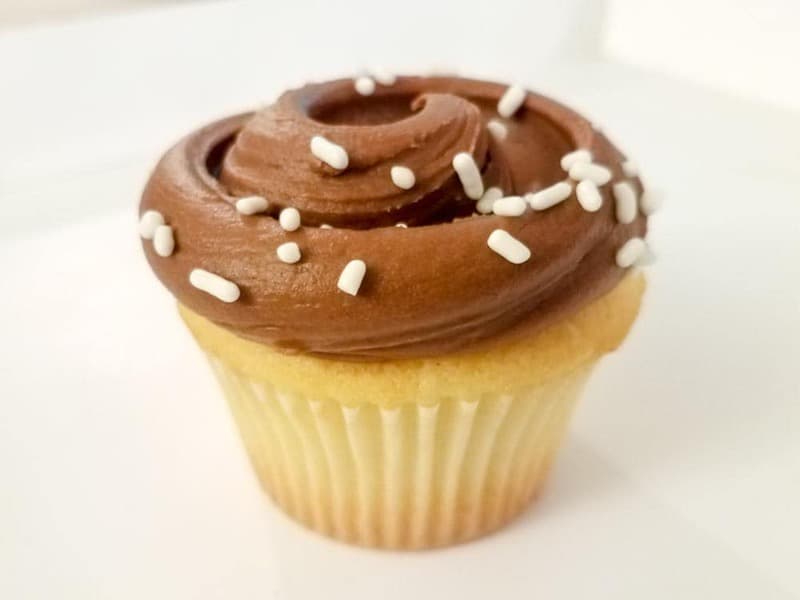 These old-fashioned vanilla cupcakes are topped with chocolate buttercream and are classically delicious.  This is the same fudge-like frosting on the chocolate cupcake so I definitely enjoyed that.

Overall, I’d have to say I enjoyed the cupcakes at Magnolia Bakery.  They were classic, well made, and had great flavor. 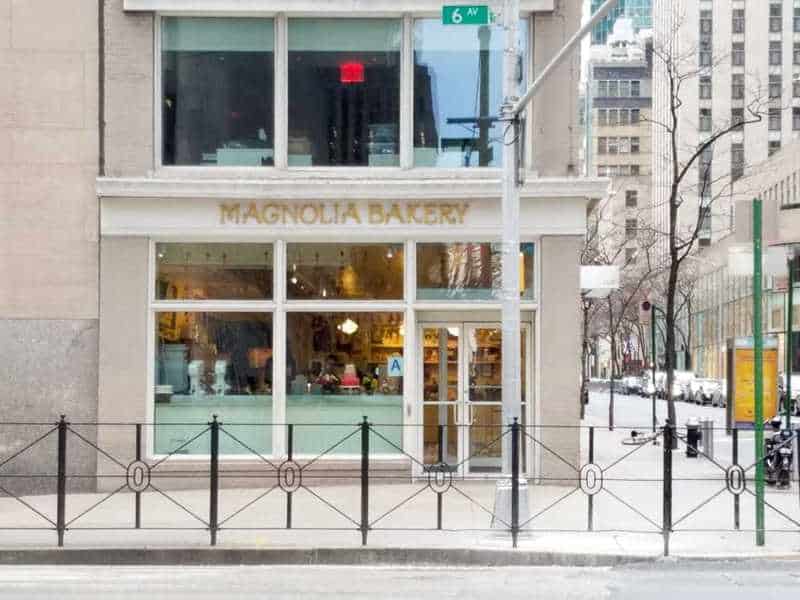 Were they the best cupcakes I’ve ever had?  No.  However, I’m still glad I went to the bakery to get some.  Now, I just need to visit Billy’s Bakery, Butter Lane, and Baked by Melissa.

I think a road trip to NYC is in my future this Spring!

Have you been to Magnolia Bakery?  I’d love to know what you thought of their cupcakes!

So fun!!! Yeah I always just felt like Magnolia's Cupcakes were just ok. I've been gone too long to know where the best spots are for them now lol but I do know babycakes has amazing like vegan/GF/allergen free ones....you'd be surprised how tasty they are lol

Oooohh!! I'll add that place to my list when I go back! xxoo

All of those looked really yummy! I love their little swirl action. I am from Arkansas and my go to cupcake bakery is Gigi's. I honestly don't think there is one cupcake from Gigi's that I would not devour! And the heaping swirl of buttercream on their cupcakes is a frosting lovers dream come true.

I love swirls of frosting!

I have not been there but would love to try them (we like to visit cupcake shops in any city we visit). I always thought the cupcake craze was started by Sprinkles cupcakes & Cupcake Wars. Learn something new every day! (We drove out of our way on a trip to try Sprinkles and we were not impressed! Not much flavor. Such a bummer!).

I live by the Sprinkles in DC and I LOVE them! Actually... loved them more than Georgetown Cupcake. And yes.... go to Magnolia! I hear all their bakery food is delish! Happy cupcakes!

How much were the cupcakes a piece? that's what blows me away about the cupcake business, the price of cupcakes...I still haven't eaten a cupcake that is worth 3 dollars yet...even the grocery store bakeries are charging that for a cupcake, since cupcakes went famous...I do love me some cupcakes though:)

Magnolia also has a wonderful banana pudding. Next time you come back you should check out Doughnut Plant NYC and the Brooklyn Smorgasburg.

Oooooooooooooh Doughnuts. I love doughnuts. There are a million bakeries I want to try!!