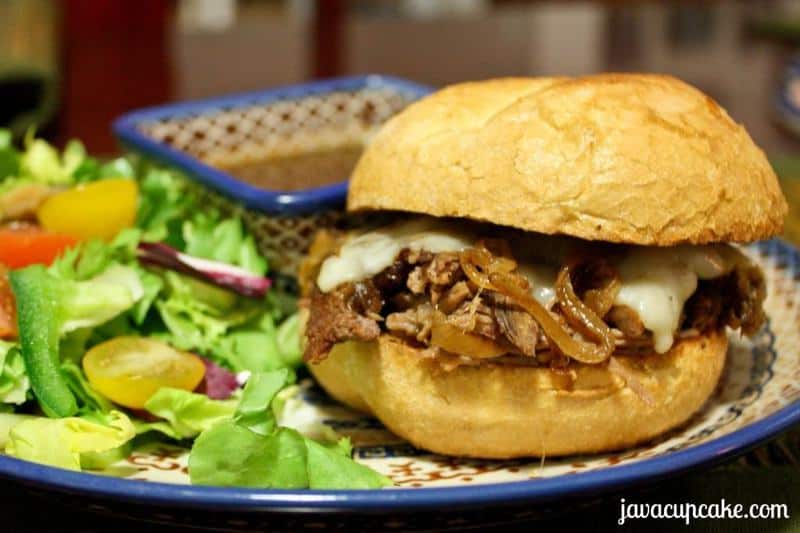 I’m always looking for a new way to serve up a roast.  A couple weeks ago, I showed you how we make Salsa Roast to use for burritos.  Today, I’ll be giving you  my Roast Beef Sliders recipe.

This is another super simple crock pot recipe that takes little time to prep, but it’s big on flavor! Plus – if you don’t have exactly the ingredients I used, you can improvise with whatever you have in your kitchen and it’ll be just as delish! So if you’re looking for an easy and delicious food to make in your crock pot, give this recipe a try!

Typically, the rolls you would use for a slider are the soft dinner rolls.  But, since we’re in Germany, we used a traditional brotchen.  It’s a roll that’s hard and crusty on the outside and soft on the inside.  Perfect to hold up against and sauce you may want to dip your slider in.  But, you can use any roll you’d like.

Let’s talk cheese.  I don’t really enjoy cheese on sliders or sandwiches.  And truth be told- I really only like cheddar cheese once in a while.  So – I’m not having cheese on my slider.  My husband though – he loves cheese and he put muenster on his slider.   You could use any cheese you wanted… heck, my daughter put American on hers.  (Gross, btw.)

I didn’t use any kind of sauce or dressing on the sliders either, but a horseradish spread would be tasty.  It’s really up to you!

UPDATE:
The next night, we sliced the roast beef and put it on toasted onion rolls. The beef & left over onions had been stored overnight in an airtight container covered in the pan juices so it had a super delicious coating of flavor on it. The sliders super yummy the first night… but cold, sliced roast beef sandwiches for night two were equally, if not even more delicious!

I always cook my ju down but add either a splash of good whisky of a half glass of a good dark beer or stout. The alc will cook out.

They were even better the next day!