The sun is shining and the crisp cold outside makes it perfect weather to make this delicious Ham Hock 15 Bean Soup!

I’ve had the ingredients for this soup in my kitchen for a week.  But, life happened and I didn’t have the time to put it all together in the morning before my day started.

So on Sunday when I woke up, I got everything in the crock pot and cooking.  By 1pm my house smelled amazing and I couldn’t wait for dinner!

Cooking the ham hocks in the crock pot with all the beans and vegetables enriches the broth and deepens the flavor of the soup as a whole. Try it for yourself and see how delicious budget-friendly can be!

One of the things I love most about making soup is that it’s really hard to mess up.  Unlike baking, exact measurements aren’t necessary for this recipe.

When I dice the carrots and celery, I just eyeball it and throw in what looks good.  It’s the same with the seasonings.  Yes, the recipe calls for an exact amount, but really it’s just what looks good.

Use what you have in your cabinet and refrigerator. Be creative!

If you like it spicy, add some pepper flakes or chili powder.  If you want it sweet, throw in a few tablespoons of brown sugar.

How about some bell peppers or zucchini? The possibilities are endless.

So, grab a bowl and fill it up, then get a crusty piece of bread and cozy up on the couch and enjoy this ham hock 15 bean soup!

Ham hocks, also known as pork knuckles, are a versatile ingredient that can be used in a variety of dishes. They are typically used to add flavor and richness to soups, stews, and braises.

Ham hocks can be cooked on their own and used as a base for soups, or they can be added to dishes like split pea soup or collard greens.

They can also be used to flavor beans, lentils, and other legumes. In addition to soups and stews, ham hocks can be used to add flavor and moisture to meat dishes like pulled pork or ham.

Ham hocks can also be used to make broth or stock for soups and other dishes.

Overall, ham hocks are a flavorful and economical ingredient that can add depth and richness to a wide range of dishes.

Beans are packed with essential nutrients and have several health benefits.

Beans are a great source of protein, fiber, and complex carbohydrates, which provide the body with long-lasting energy. They also contain a variety of vitamins and minerals, including iron, potassium, and folate.

In addition to their nutrient content, beans are also low in fat and calories, making them a great choice for people looking to maintain a healthy weight.

Furthermore, beans are a versatile ingredient that can be used in a wide range of dishes, from soups and stews to salads and dips.

Overall, beans are a healthy food that can help support a balanced diet and promote good health.

History of Beans in Soup

The use of beans in soup has a long and rich history dating back to ancient civilizations.

Beans have been a staple food for thousands of years, and they have been used in soups for their protein and fiber content, as well as their flavor and versatility.

In ancient Egypt, beans were used in a variety of soups and stews, and they were also a popular ingredient in Roman and Greek cuisine.

For Europe, beans were used in dishes like pea soup, lentil soup, and bean soup, and they were often served to peasants and working-class people as a cheap and nutritious meal.

In the United States, beans were introduced by European immigrants and became a popular ingredient in dishes like split pea soup and bean soup.

Today, beans are still a popular ingredient in soups around the world, and they are enjoyed in a wide range of dishes, from hearty stews to light and flavorful soups. 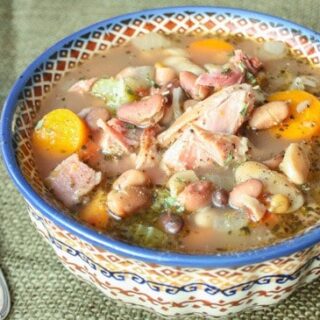 Cooked in the crock pot all day, this hearty ham hock 15 bean soup with ham is the perfect dinner for a crisp Fall day! 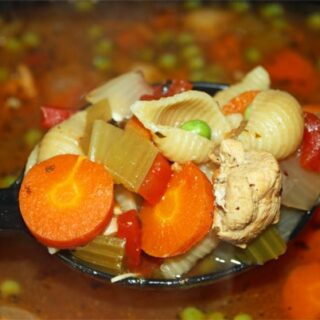 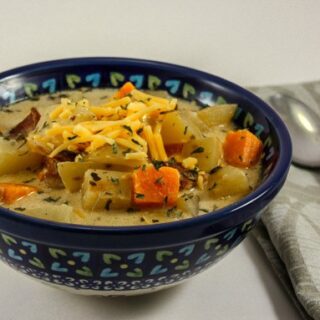 Thanks for posting, looks delicious!