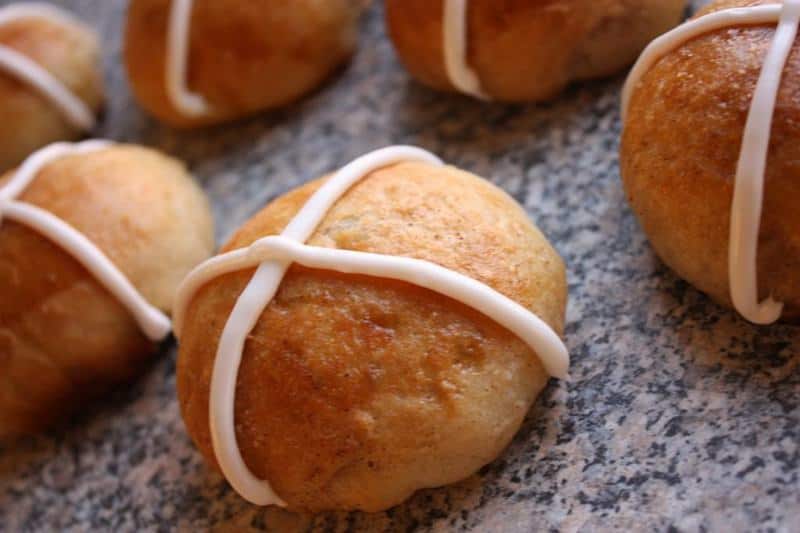 I’ve heard of Hot Cross Buns before and I knew they were a holiday tradition, but it wasn’t until this Easter that I realized what the tradition meant.

In many historically Christian countries, buns are traditionally eaten hot or toasted on Good Friday, with the cross standing as a symbol of The Crucifixion. They are believed by some to pre-date Christianity, although the first recorded use of the term “hot cross bun” was not until 1733; it is believed that buns marked with a cross were eaten by Saxons in honour of the goddess Eostre (the cross is thought to have symbolised the four quarters of the moon); “Eostre” is probably the origin of the name “Easter”. Others claim that the Greeks marked cakes with a cross, much earlier.

According to cookery writer Elizabeth David, Protestant English monarchs saw the buns as a dangerous hold-over of Catholic belief in England, being baked from the dough used in making the communion wafer. Protestant England attempted to ban the sale of the buns by bakers but they were too popular, and instead Elizabeth I passed a law permitting bakeries to sell them, but only at Easter and Christmas.

Sharing a hot cross bun with another is supposed to ensure friendship throughout the coming year, particularly if “Half for you and half for me, Between us two shall goodwill be” is said at the time. Because of the cross on the buns, some say they should be kissed before being eaten. If taken on a sea voyage, hot cross buns are said to protect against shipwreck. If hung in the kitchen, they are said to protect against fires and ensure that all breads turn out perfectly. The hanging bun is replaced each year.

So after learning the deep tradition of the bun, I decided to make them this year and share them with my neighbors. I used The Pioneer Woman’s recipe and doctored it just slightly with what ingredients I had in my own kitchen. Next time I make these, I think I’ll double the raisin amount… there just weren’t enough raisins in every bite and I love me some warm, fluffy raisins. Food has always been a big part of my life and sharing meals with friends and family is one of my favorite things to do. These buns are the perfect way to show someone you care.

Hot Cross Buns
Recipe: The Pioneer Woman
Makes about 20-25, depending on size