I spent all weekend making these cupcakes.  The first day, well, it was an epic fail.  They weren’t pretty at all.  The middle had a huge hole and I was super sad.  Boyfriend & I have agreed to disagree about what happened.  The power went out with about 2 minutes left while they were baking.  I said it’s the powers fault.  He says that they looked like that before the power went out. Like I said, agree to disagree.  Anyways, I tried again on Sunday and I am *SO* glad that I did.  These are one of the best cupcakes that I’ve ever had.  I might feel that way because I ate a few  spoonfuls of dulce de leche and batter and frosting while I was baking but let’s just keep that between us.  I did use a jar of dulce de leche, I looked up how to make it on my own and I decided that I wasn’t feeling that saucy.  I was able to find this jar at our local Met Market.  If you are feeling saucy and more power to you if you are, then it sounds like Alton Brown has a great recipe/directions and you can find that here.  There’s also this method, with a can of sweetened condensed milk.  Whatever you decide to do, hopefully you love this recipe as much as I do.

This recipe comes from Joy the Baker, who I also love.  She has a cookbook coming out soon, which I need.  Yes, I said need.  I decided to use a little sprinkle of sea salt to top them off, but sprinkles or just a drizzle of the dulce de leche would work just fine too. 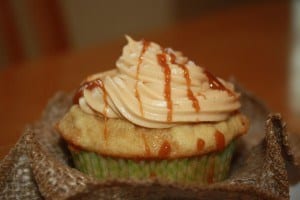 Place racks in the center and upper third of the oven and preheat to 350 degrees F.  Line two Cupcake pans with paper or foil liners.  Set aside.

In a medium bowl, whisk together flour, cornstarch, baking powder, baking soda and salt.  Set aside.

In the bowl of an electric stand mixer fitted with a paddle attachment, add butter and sugars.  Beat on medium speed until fluffy and pale brown, about 3 minutes.   Stop the mixer, scrape down the sides of the bowl and add one egg.  Beat on medium for one minute.  Add the remaining eggs, one at a time, beating for one minute between each addition.  Stop the bowl and scrape down the sides as necessary. Beat in vanilla extract.

Divide the batter between the prepared cupcake pans, filling each liner about two thirds full.  Bake for 18 to 20 minutes or until a cake tester inserted in the center of one of the cakes comes out clean.  Let rest in the cupcake pans before removing to a wire rack to cool completely.  Cupcakes should be completely cooled before frosting.

To make the frosting:

For garnish, I heated a few spoonfuls of dulce de leche of a low flame until just pourable.  Then I drizzled it over the cupcakes and topped with a few sprinkles.  Add a few sprinkles of fine sea salt if you’re feeling fancy.  I stored the cupcakes in the fridge for an hour to chill the frosting slightly.

I like to enjoy my cupcakes within two days of preparing them.  Feel free to wrap and refrigerate them because of the cream cheese in the frosting.  Let come close to room temperature before serving.

Just as an FYI, because they were such an epic fail the first time, I followed these directions *EXACTLY* the 2nd time around and they were beautiful and delicious.  Just the way I heart my cupcakes.  Happy cupcakin’ Monday, folks! 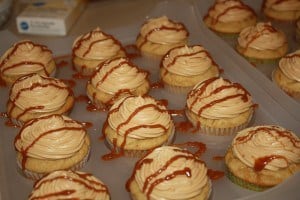 OMG this receipe is owesome I can't wait to make it for my next party, Thank you very much mmm looks delicius and I know it would taste better than geat!

These look wonderful!! I have been wanting to try making my own dulce de leche and this would be a great recipe to try it with :) Thank you!