Nestled between the bustling city of Tacoma, Washington and the majestic Mount Rainier, Wanna Cupcake? is a sweet dessert & cupcake shop in the Puyallup Valley that bakes delicious treats for every occasion. 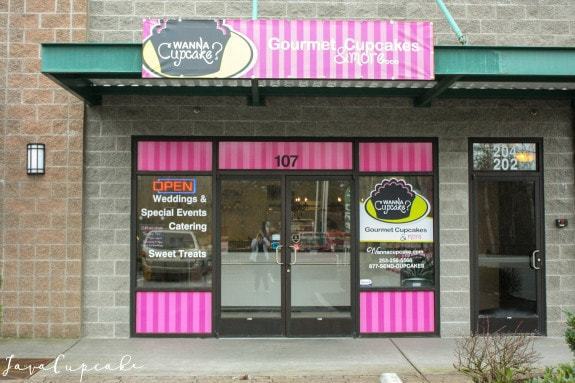 Wanna Cupcake? owned by Karie & Jim Romano has been around since 2009.  They began selling their cupcakes at local Farmers Markets but realized their passion would be greater served by opening their own store front!

Before I moved to Germany, I had tried to connect with Karie to sample her delicious cupcakes… but our timing never worked out.  So, when I had a last minute trip back to Washington State I reached out to Karie and scheduled a visit to her cupcake shop! 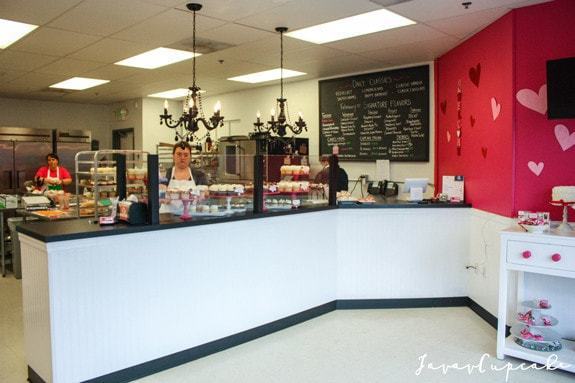 Upon entering Wanna Cupcake? the first thing I noticed was the big chalk board with the daily flavors along with the beautiful display of cupcakes at the counter!  It’s like the cupcakes were calling out to me… PICK ME! PICK ME!  Bring pink cake stands and pink walls created a very welcoming, fun-loving vibe in the store.

Next, and my most favorite part of the shop is the open kitchen!  I have been in MANY cupcake stores (dozens and dozens!!!!), but Wanna Cupcake? was the first cupcake shop that had their kitchen and decorating stations in plain view!  I absolutely loved this! 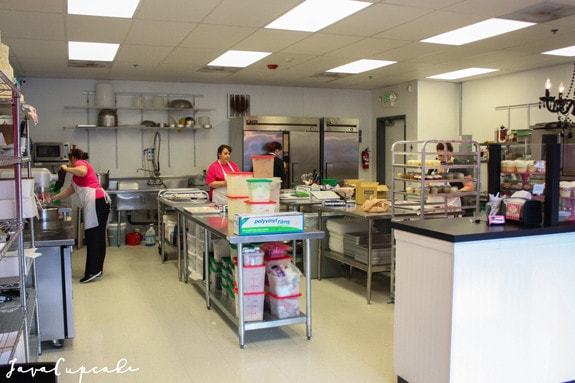 I remember when I was a kid leaning against the glass at the Cinnabon staring at them make the rolls and being in awe.  This open kitchen at Wanna Cupcake? gave me that feeling again!  I was giddy when I realized I could actually see the bakers baking and decorating the cupcakes that I was about to enjoy!  I was fascinated with the boxes and boxes of caking supplies and those giant stand mixers!! EEEEK!  I need all of it!  I probably could have sat at the counter watching those ladies bake for hours! 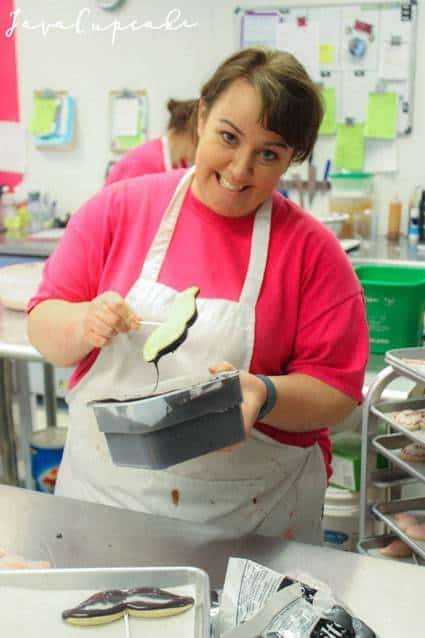 Meet Karie.  Hi Karie!!  Karie and her husband Jim began baking cupcakes for their kids birthdays back in 2009 and quickly realized they could do more with their baking passion!  So, they began selling their cupcakes at local farmers markets (which is how I first heard of them!) until they realized they wanted to do more!  In 2010, they moved to Puyallup and opened their Wanna Cupcake? store front, which is their home today! They have 8 employees and still sell their cupcakes at 3 local farmers markets! (Puyallup, Steilacoom and Tacoma for the locals!)  Karie hopes to participate in several local festivals this year too!

Let’s talk cupcakes.  All of their cupcakes are baked fresh daily from scratch using only the finest ingredients and their own special recipes.  Wanna Cupcake’s frostings are all fresh American Buttercream, Italian Meringue, Cream Cheese or Chocolate Gananche, depending upon the flavor, and each one is hand piped and decorated to exacting standards.

Every day, Wanna Cupcake? offers 13 different flavors consisting of daily standards plus a selection of specialty flavors of which they have more than 100!  I was in the shop on a Wednesday, which mean they had Moose Tracks, Chocolate Cherry Cordial, Coo-Coo Coconut  and Snickerdooodle as their special flavors!  In their case, Wanna Cupcake? also had a few extra mini cupcakes from a special order for sale.  They don’t typically stock mini cupcakes but if you catch them on a day where there’s extras… you’ll be lucky! 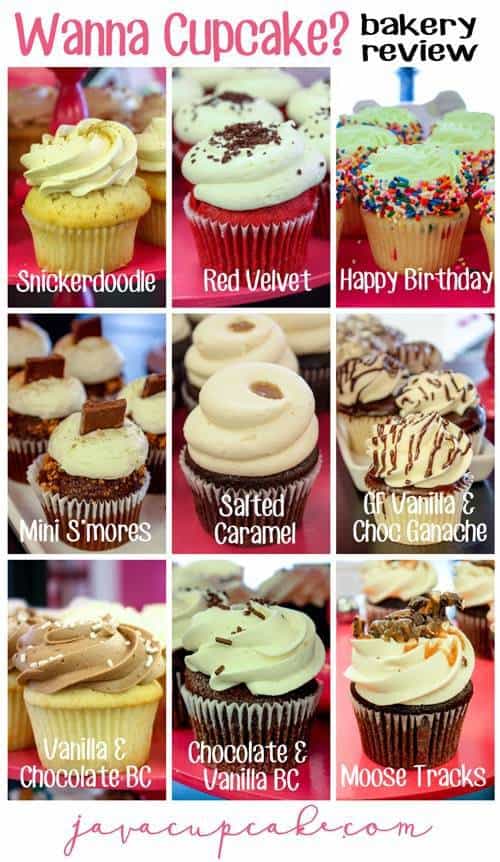 Karie treated me to any cupcake I wanted to try.  I was with my Dad and son, Matty, we we picked out 5 to sample.  Coo-coo Coconut for Dad, Happy Birthday for Matty and Moose Tracks for me then Snickerdoodle and Lemonicious to share.

My favorite was the Moose Tracks.  There’s just something about that sweet, salty, chocolate and caramel that does it for me.  So darn delicious.  My Dad absolutely loved the coconut.  He raved about it for weeks after.  And Matty, he loved the sprinkles!

Every cupcake I tried from Wanna Cupcake? was moist, not too sweet and full of amazing flavor.  These cupcakes are what a cupcake should be.  Full size cupcake, generous dollop of frosting and quality ingredients made with pride and love.  I could not find one thing wrong with these cupcakes.

Karie said their #1 selling cupcake was their Salted Caramel made with their homemade caramel sauce.  I tried it.  It’s amazing.

Thanks to Karie at @WannaCupcake for making Matty’s birthday cupcakes! It’s great to have friends in Washington in the cupcake biz!

In fact, we loved them so much that instead of making cupcakes for my son’s birthday party in Washington… I ordered from Karie! Aren’t these birthday cupcakes the cutest? My family couldn’t believe I bought them… they thought I made them! hehe Nope… Karie did! 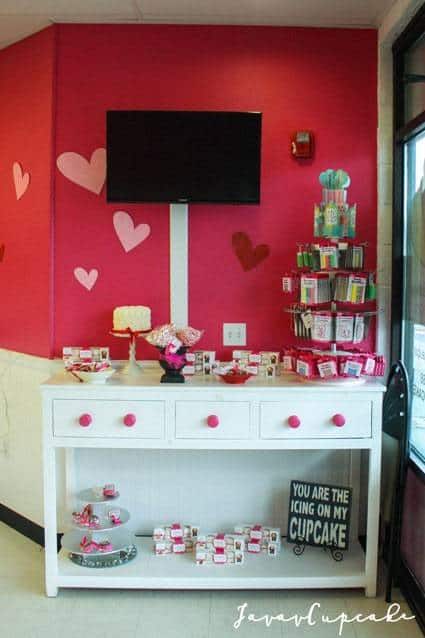 Since it was Valentine’s Day, Karie had her shop set up with super cute themed display and lots of extra goodies to eat.  Cake pops, rice krispie treats, chocolate pretzel rods and hand dipped cookies!

The hand dipped cookies… they’re dipped in CHOCOLATE!  Karie sent me home with one of those too.  I didn’t share.  It was so good!

Oh… don’t let me forget… but Wanna Cupcake? also does custom cakes for every occasion!!  Seriously, they do it all! 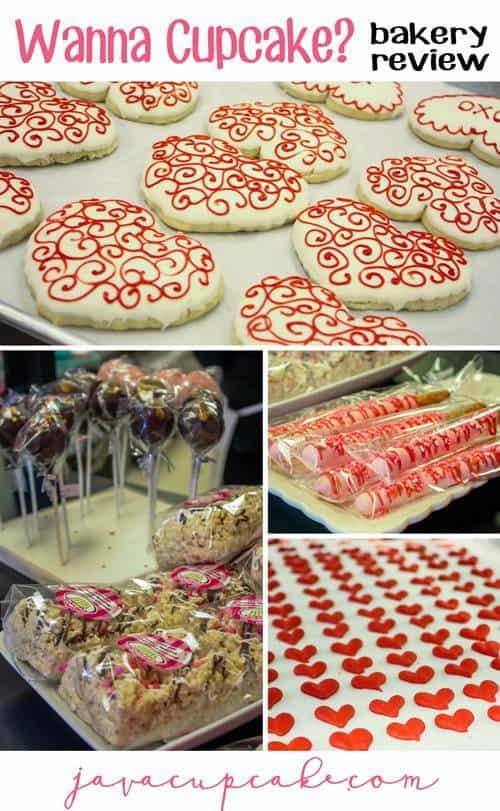 Karie and Jim asked me not to give away all their big plans… but some awesome things are coming next for Wanna Cupcake?  One thing I can share with you though is parked out front of their shop.  A big cupcake van!  Karie and Jim hope to someday mobilize their cupcakes and bring them to a party or sporting event near you! 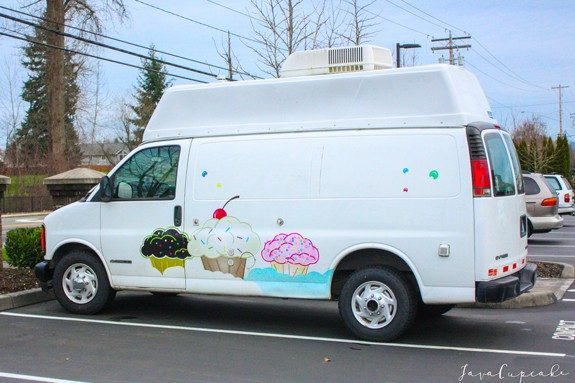 I plan to be in Washington again late this summer and I can’t wait to see all of Karie and Jim’s plans come to life!  I really wish nothing but the best for these two hard working, cupcake loving folks!

So, if you’re in Washington you must make the time to visit Wanna Cupcake?! Not only are Karie and Jim the best… but their cupcakes are awesome! 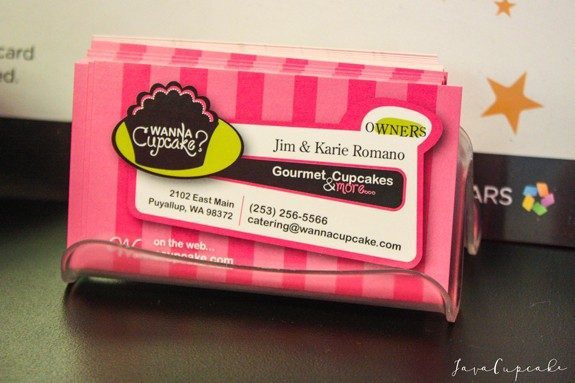 Their Puyallup bakery & store front is located at 2102 East Main in Puyallup, WA between downtown Puyallup and downtown Sumner.  Wanna Cupcake? is open every Tuesday-Saturday 9:00am-6:00pm but are available every day for weddings & special events. 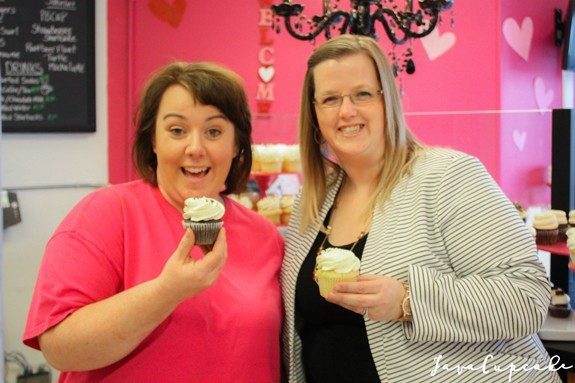 A HUGE thank you to Karie and Jim for their hospitality while I was at their shop.  It was a thrill to meet you both and I thank you so much for the bakery tour!  I am looking forward to seeing you again in the Fall when I return!

Yay!! I live in Washington and will be in Puyallup in a couple of weeks. I can't wait to stop in and try a cupcake (or two!!). Thank you for the great review!

Tell Karie I say hello when you visit!!

Amy @ A Healthy Life For Me

What a great bakery, oh how to choose which cupcake to enjoy...

what a great cupcake shop!!! The moose tracks and salted caramel are particularly singingggg to me!

I need to take a trip to Washington just to try these cupcakes.