Made with Driscoll’s strawberries, this traditional German strawberry shortcake is a simple, delicious treat your entire family can enjoy! 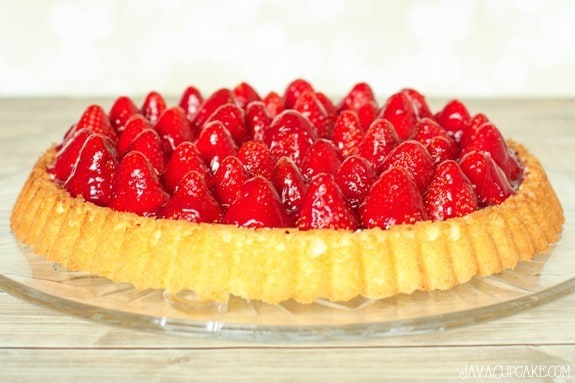 Living in Europe, I’ve had the opportunity to try desserts from so many different countries. Here in Germany, one dessert that can be found during the Spring and Summer at every bakery and restaurant is Erdbeerkuchen mit Sahne, which translated means strawberry cake with cream or as it’s called in the USA, strawberry shortcake! 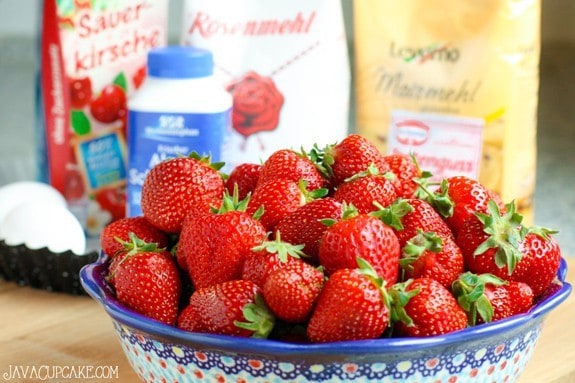 The base of this German shortcake is a light, airy cake made with pastry flour, corn flour, eggs and a touch of sugar. It’s not too sweet and makes the perfect base for the cream and Driscoll’s strawberries.

In Germany, the finest ground flour, Type 405 is used for these types of tarts and cakes. It has the highest starch content which makes it ideal for the baking of cupcakes and cakes where you want a finer crumb, the American equivalent being Pastry Flour. 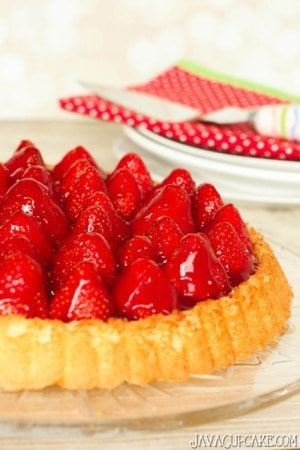 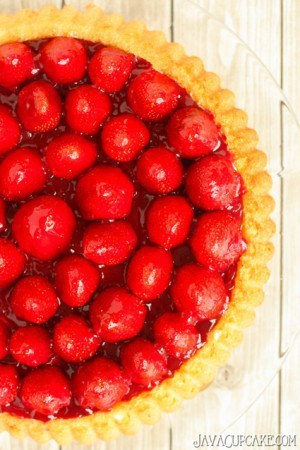 For more on the types of flour used in Germany, my friend Ewa of Das Cupcake in Frankfurt, Germany has written a great post about differences between German and American flours! Check it out for more info!

Corn flour is also used in this recipe, which gives the cake the golden color and adds a touch of flavor. Not to be confused with corn starch, corn flour is yellow in color and can be substituted with finely ground corn meal if you can’t find corn flour in your grocery store. 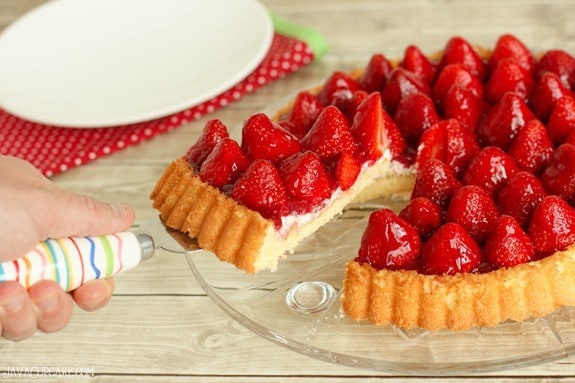 The cream layer is the easiest part of this shortcake with only two ingredients, heavy cream and sugar. For this recipe, I used a thick, creamy German high-fat cream that is made with cream from the Alps. It’s one of the most delicious creams I’ve ever had and the flavor is truly out of this world. In the USA, you’ll want to use heavy whipping cream which is easily found in the dairy section of your local grocery store.

The glaze might be a little harder to recreate as easily in the United States. I did a bit of research online and found that the brand Dr. Oetker makes the red & clear glaze packets in the USA and can be found at stores like Walmart and Wegmans. If you can’t find the glaze packets, I also found several recipes online using powdered gelatin or gelatin sheets to make a glaze. 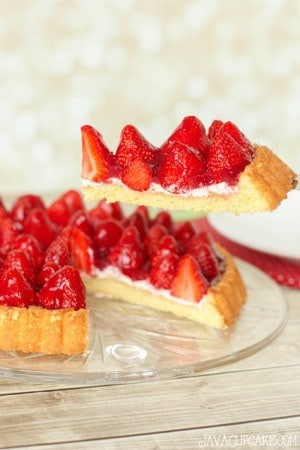 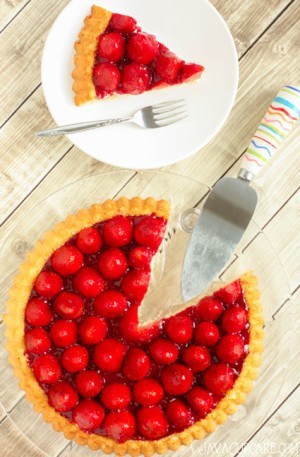 The pan I used is a traditional fruit cake pan called a Tortenboden that I bought at a local German store. It has fluted edges and the bottom is indented to create an edge around the outside when you flip it over. If you can’t find a Tortenboden in the USA, I’d suggest using a springform pan to bake the shortcake in. With the ring still on the pan, let the cake cool completely then spread a thin layer of whipped cream across the top of the cake. Arrange the strawberries on top of the whipped cream. Spoon the glaze over the strawberries then allow the glaze to completely set at least an hour before removing the ring around the pan.

A note about the measurements for this recipe: European bakers always measure their ingredients by weight and volume. They never use cups for measuring because it’s typically inaccurate. To make this recipe, you’ll need a digital food scale. These scales can easily be found in any Target or Walmart type store for less than $30. Once I got my scale, I began measuring all my ingredients by weight and found my recipes came out better than ever. I included both Imperial/US and Metric/Europe measurements when either would work in the recipe. 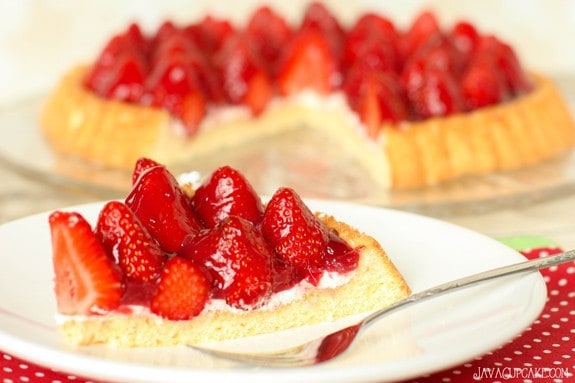 And as a special treat to my readers, Driscoll’s has provided $100 in Driscoll’s coupons to one lucky person! Participants must be 18+ years old and live in the USA to win. To enter, fill out the form at the bottom of this post!

Paid Endorsement from Driscoll’s – Visit www.driscolls.com for more berry recipes and to enter their summer sweepstakes.

I tried making the base, as far as I can tell I followed the recipe exactly. However the cake base turned out super thin and chewy. Not at all as it should. Maybe it's missing baking powder from the recipe...? I still used the whipping cream and glaze instructions after getting a recipe for the base from somewhere else.

I've been searching for a recipe for erdbeerkuchen mit slag for ages! So glad I found your post. The recipe reminds me of my student days in Regensburg!

I would love to try the vintage strawberry shortcake

I can't wait to try the Blossom Strawberry Shortcake Cupcakes - so cute! I think that'll be the centerpiece for our Fourth of July party!

I usually make good old-fashioned strawberry shortcake, which is always a big hit in our house. But I'd love to change things up by making the Strawberry Shortcake Skillet Cobbler from Driscoll's website.