Made with an authentic recipe & German ingredients, these Black Forest Cupcakes are a delicious alternative to the traditional Schwarzwälder Kirschtorte or Black Forest Cake of Germany! 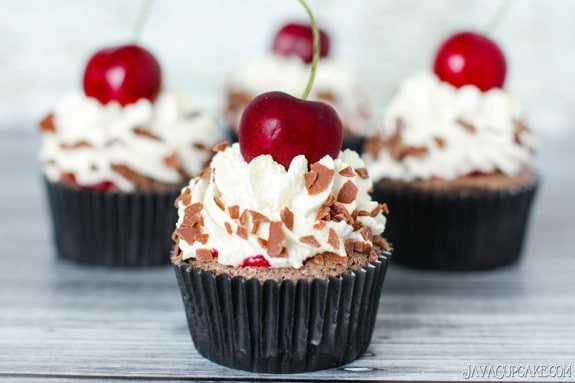 You can’t be in Germany without eating Black Forest Cake at least once, if not dozens of times. For almost 100 years, this cake has been a favorite of Germans and chocolate & cherry lovers around the world.

The cake gets it’s name from the region it was created in, the Black Forest and features one of the areas biggest crops. Cherries! The Schwarzwälder Kirschtorte or Black Forest Cake is made with layers of chocolate cake filled with cherries soaked in a cherry brandy (Kirschwasser) and fresh whipped cream topped with cherries and chocolate shavings. 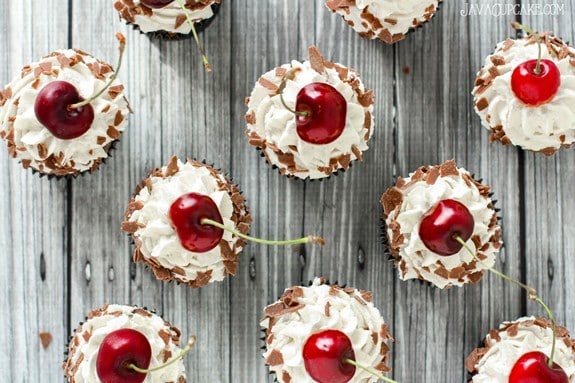 There is a mandate in Germany that states that if Kirschwasser is not used in this cake, it can not be called a Black Forest Cake. In fact, most people who make Black Forest Cakes or cupcakes in the United States aren’t actually making an authentic BFC. In the USA, a basic chocolate cake, canned cherry filling and whipped cream or buttercream frosting are typically used but are a poor substitute for what should really be in a Black Forest Cake. 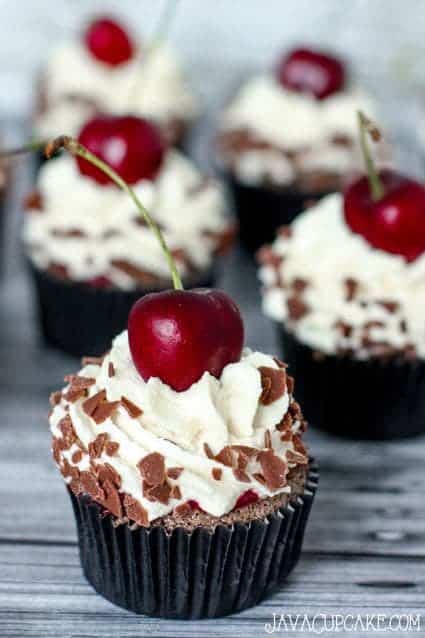 The chocolate cake in an authentic Black Forest Cake is made with egg whites, very little chocolate and no butter.   It’s not overly sweet, yet still rich, moist and full of flavor.  The filling begins with sour cherries from the Black Forest region of Germany that have been soaked in a clear cherry brandy called Kirschwasser.  And finally, the whipped cream is light, not too sweet and is garnished with chocolate shavings and a cherry. 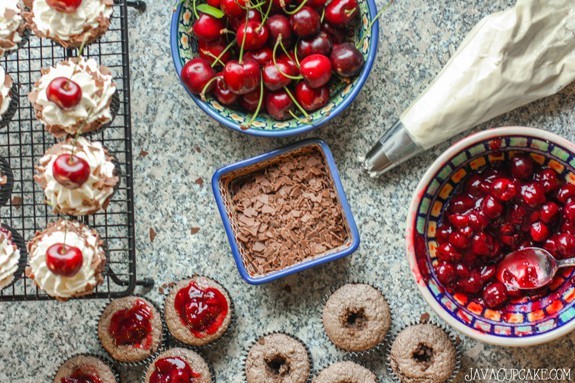 A traditional cake is made in layers, but since I was transforming this recipe into a cupcake, I decided layers might not be so easy.  To assemble these cupcakes, I cored the center of each cupcake with a small serrated knife (1).  I then filled each hole in the cupcakes with the Kirschwasser soaked cherries until they were overflowing (2).  Fresh whipped cream was piped onto the top of each cupcake then then rimmed with chocolate shavings (3).  Finally, a fresh, locally grown cherry was placed on top of the whipped cream (4). 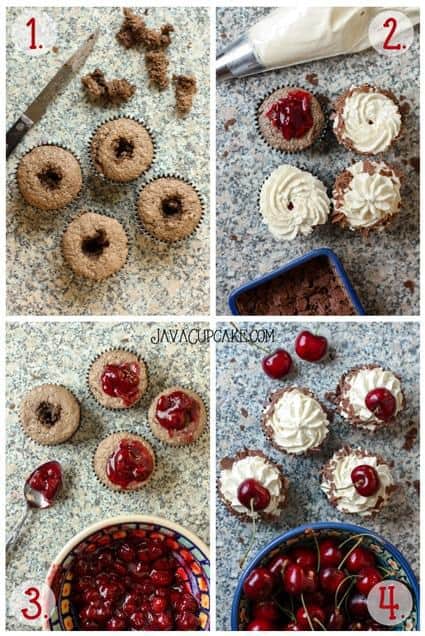 I shared these cupcakes with my next door neighbor is who German and she said they were her favorite dessert I’ve shared with her so far.  And I’ve shared a lot of things!  She said the flavor and texture were exactly how they were supposed to be… not overly sweet, full of that authentic Kirshwasser and cherry flavor.  Yay! If I could impress my German friend with these, I know they’re a winner! 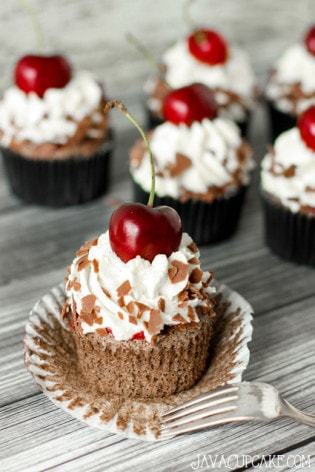 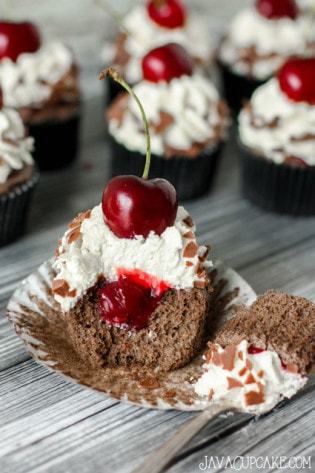 A note about the ingredients:  The only ingredients that may be hard to find are the sour cherries and Kirshwasser.  If you can’t find any of the clear liquor at your local store, try substituting a clear cherry brandy instead.  They key here is to use a clear, cherry flavored liquor to soak the cherries in.  As for the cherries themselves, DO NOT use cherry pie filling.  Try finding sour cherries that are sold in a jar in cherry juice.  You don’t want filling or any of the canned cherry pie goup on your cherries.  These are two of the biggest mistakes made when Americans replicate this recipe.

With that being said, these cupcakes are OUT OF THIS WORLD amazing and I really hope you try them!

Hi there! These cupcakes look absolutely beautiful and delicious. However, I have a few questions or, I guess, things I noticed about the filling recipe. First of all, did you really use 3Tb of cornstarch to thicken 1/3C of juice, or is it possibly a typo? 1Tb of cornstarch will typically thicken 1 whole cup of liquid into a very thick sauce. I gave this a shot last night and 3Tb of cornstarch thickened my cherry juice into nearly a solid brick. Not to mention - I should have known, but it's nearly impossible to add dry cornstarch into a hot liquid - it instantly solidifies into tiny starch clumps. Maybe whisk some of the cherry juice in to make a slurry? Just a few suggestions to make this part of the recipe more user-friendly. Thanks!

Ooh-la-la! (to add a little French to your German recipe... Achtung didn't seem to cut it, and I believe in Germany they adopt French phrases too?) This looks like the perfect recipe for next week, and I happen to have too many egg whites on hand as I've been making homemade pasta with an extra yolk. Forgive me if I missed this but you say "dark" cocoa powder, yet your batter seems not that dark. I have some "double dutch" cocoa, I think it's Hershey's special dark, which is nearly black. That is the color I tend to associate with Black Forest, but maybe that's the American perspective. I am possibly going to do a mix of 2/3 special dark to 1/3 natural and see how it goes. That dark cocoa, I love with the black-bottom cupcakes with the cream cheese inside. Can't wait!

Hi! You're right, the batter isn't very dark... but that's due to the amount of egg whites that are in the batter. They lightened it up significantly. I typically use the Hershey's Special Dark cocoa powder in all my baking, so if you use that... you'll be good! Happy baking!

Hi Betsy! I just love your recipes! I was wondering about the sour cherries. I can find canned or jarred sour cherries in either a sugar water or syrup but no juice. Does it make a difference as to which one is used? Thank you for all your help!

Hi Michelle, Sorry I didn't get back to you sooner... I was in Rome all last week and am just not getting to emails and comments on the blog! So, as for the cherries, I don't think it really matters much which you use as long as they are the sour cherries. The cherries themselves are the key... not necessarily what they are soaking in. I used the cherries in juice because that's what I had access to... you can use what you have available to you. Let me know how it all turns out! Happy baking!

this just taste delicious :D but my problem is that the cupcake itself that i baked is dry and i dont know where i got wrong.

Hi Phil! Sorry to hear about your cake being dry. The only thing I can think of is that maybe the German version of moist is different than the American. German cakes are typically a bit drier and less sugary than American cakes. Next time, try spooning some kirsch liquor over the top of the cupcake before you fill them with cherry to add a bit of moisture in the cake. Thanks for reaching out with the feedback and happy baking!

Is there any substitution for the Kirschwasser (cherry brandy) that is appropriate for those under 15?

The entire point of these cupcakes is that they are authentic German Black Forest Cupcakes... meaning they aren't appropriate for anyone you don't want to consume alcohol. Sorry!