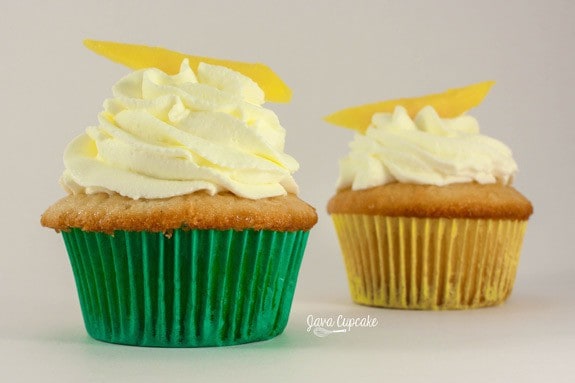 Last Friday I’m went to a Mexican themed potluck & bible study.  Unfortunately, I’m wasn’t going to make it to the dinner portion of the evening, but I would be there for dessert! So I wanted my contribution to the potluck to be something that I could be there to enjoy as well. Doing a little research about Mexican desserts, I found a lot of churro and fried ice cream recipes, but not many cakes.  Except one cake… the tres leches cake.  This light and airy cake is soaked with a rich mixture of milks that make it so incredibly delicious.

After soaking the cupcakes with the milk sauce, I decided to keep it pretty traditional and top it with a light whipped cream frosting flavored with a bit of rum and sugar soaked mango slices for a little big of color and sweetness.

The first round I used the Pioneer Woman’s recipe that required separating the eggs, used a lot less flour and no butter.  This round didn’t turn out very well.  They baked very quickly… at 15 minutes they were already over baked and they had a very eggy taste.  Which, I’m sure would have been covered up with the tres leches, but I wasn’t convinced that this light and airy cake could hold up to the milk I needed to pour over it. 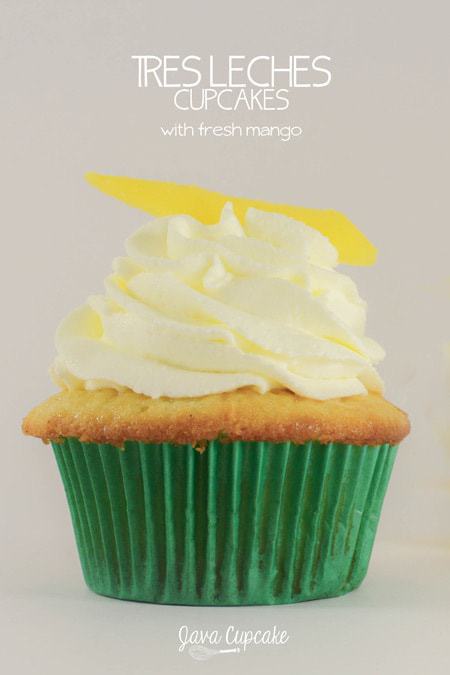 So, I went in search of a recipe that called for butter and a bit more flour.  I settled on the recipe from the Food Network.  I don’t typically use recipes from FN, but this one seemed to be a bit more stable and I was now in a time crunch.  Less than 5 hours to the potluck and I had no cupcakes. These cupcakes are not only beautiful, but the taste absolutely amazing.  The creamy milk soaks right into the cake without making it soggy or overpowering in flavor.  I am so glad I had the opportunity to make these cupcakes!

If you’re in the need for more Mexican themed desserts… you might want to check out my Mexican Hot Chocolate Cupcakes.  They’re from my earlier days of blogging, so the pictures aren’t as pretty… but they cupcakes don’t disappoint! So if you’re in need of a not only delicious cake, but a treat for your next Mexican themed potluck… I’d definitely make these cupcakes!

You could easily convert these Tres Leches Cupcakes into a cake as well.  Just bake in a 9×13 pan and after you remove it from the pan,  drench it in the milk mixture and cover in whipped cream.  When you cut the cake into squares, top each one with a slice of mango! Delish!

I've only tried tres leches once and I absolutely loved it. They look delicious; thanks for the recipe~

This is such a great recipe! I made them last night and they came out and tasted amazing!! Thanks for this tasteful recipe!

Oooohh! Yay! I'm so happy to hear you made these and loved them!! xoxo Happy Baking!

Do u think this recipe will work in my giant cupcake pan? Can I pipe rosettes with this cream recipe? Sounds so good and I want to make it for my step moms bday. Thanks!

I've been looking for a good tres leches recipe! Thanks for taking the time to find a good one! These are gorgeous, Betsy!!!

Thanks Heather!! They were just as delicious too ;)

I have a recipe for a cake which is soaked with a strong coffee. I never thought about doing the same with milk. Really good idea, I have to try that.

Karin- I love a good coffee soaked cake too!! Soaking the cake with this milk though - just makes it so rich. I was surprised at the creamy flavor it had too! SO INCREDIBLY YUM! <3 Betsy