Celebrate Mexico and their amazing hertiage with a little spice and a lot of chocoalte and these sooo yummy Mexican Hot Chocolate cupcakes!

So what makes these chocolate beauties Mexican? Well my friends, have you ever had Mexican Hot Chocolate? It’s rich, smooth and has a hint (well maybe more than a hint) of heat!! And that heat my friends comes from CHILI!!! No…. not the kind with meat and beans, but the kind of pepper that SPICY and HOT! These cupcakes are made with a dark chili chocolate and some heat… chili powder!

Now, because I love me some marshmallows in my hot chocolate, I topped these with toasted marshmallows. Originally I wanted to make a whipped cream frosting, but I still don’t have all my household goods yet and didn’t have the tools I needed (candy thermometer)….. so next time, I’ll definitely top these with marshmallow frosting! 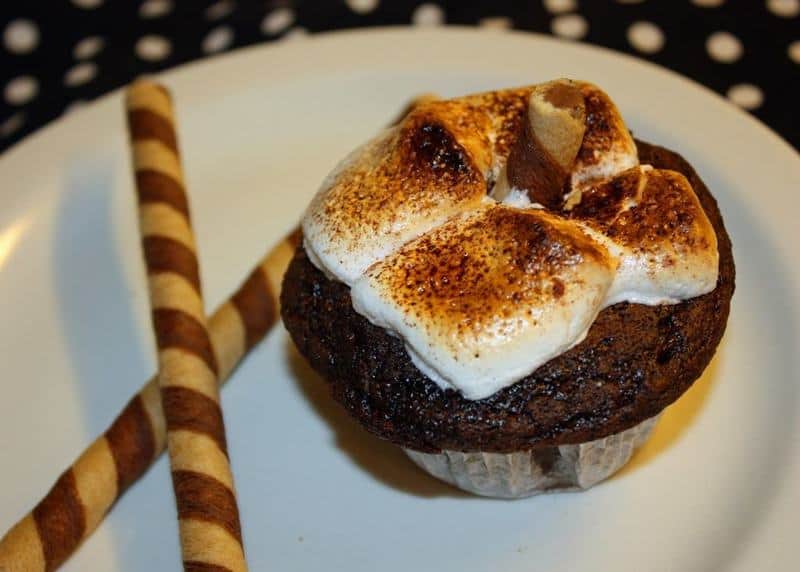 These cakes aren’t really spicy, but you can definitely taste the heat from the chili. If you want a spicier cupcake, consider filling it with a chili cream or a fruit seasoned with the hot stuff! Mmm mmm good!

Do you have any tried and true recipes for a plain hot chocolate cupcake? I want it to taste more like hot chocolate than just a chocolate cake but I have tried two recipes that use the hot chocolate mix (which I don't think is the problem but I don't know what is) that have completely fallen and/or overflow. I need to try the trick of cooking at a higher temp with less batter in the cup but it was such a mess to clean that I am nervous about trying those recipes again. I have a great marshmallow buttercream frosting and wanted to do the hot chocolate cake with that frosting in honor of our cooler fall days at our farmers market. Any suggestions would be great!

Here is the first recipe I used....I tried it twice. The first time as instructed and the second time I didn't melt the butter but mixed it as I do most of my other cupcakes.....room temp butter and sugar, then egg, then the dry and wet ingredients alternating. They didn't work either way! :(

1 1/8 cup all purpose flour 2 hot cocoa packets (this measures out to approx 1/2 cup) 1 1/4 tsp baking soda 1/2 tsp salt 3/4 cup white sugar 1 egg 2 teaspoons vanilla extract 3/4 cup buttermilk 1/2 cup butter melted Preheat oven to 350 degrees F. In a bowl, whisk egg and sugar until smooth. Add in your buttermilk, butter and vanilla and mix until smooth. Sift your dry ingredients together and add to the wet mixture, mixing until well combined. Line a muffin tin with liners and scoop batter into each cup. Bake for 16-20 minutes.

Fold the cream cheese mixture into the whipped cream.whip the cream until you have stiff peaks.