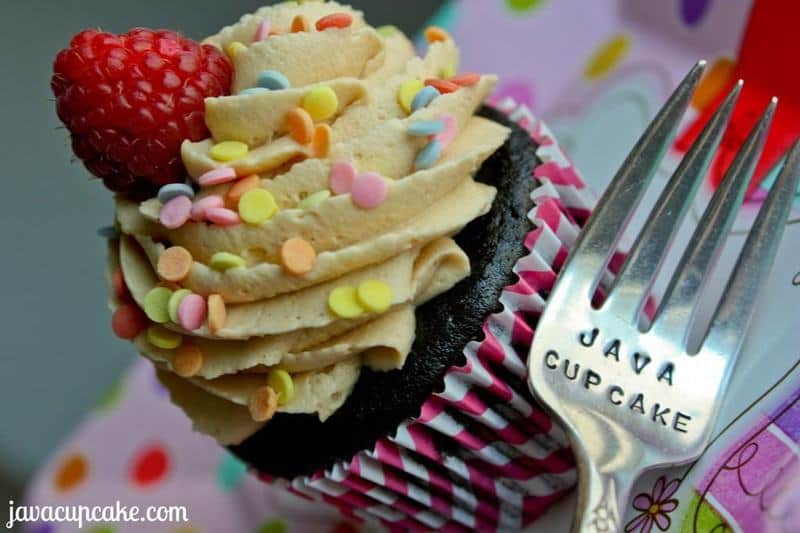 Today is my 35th 29th birthday and to celebrate I made cupcakes!  Peanut Butter & Jelly Chocolate cupcakes to be exact!

But… before I get to the cupcakes, I have to tell you a story… a sad, sad story.  You see, yesterday I had big lofty plans to make myself a super fancy birthday cake.  It was going to be three layers of Valhrona chocolate cake filled with fresh raspberries and topped with a Disaronno buttercream.   It was a fail. 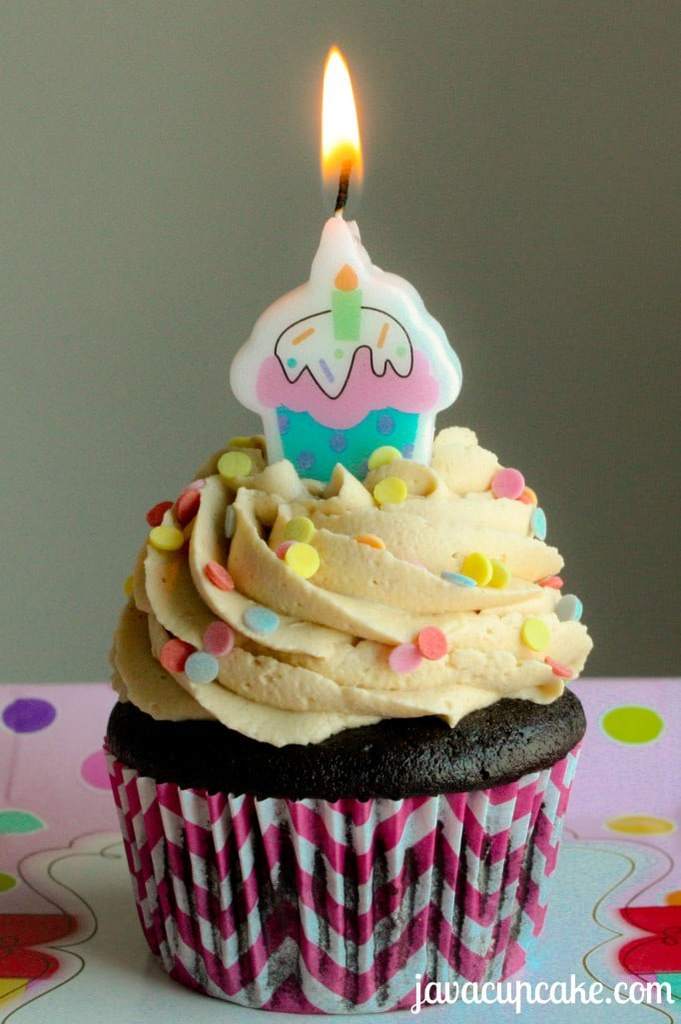 I mean, the cake tasted really good.  The raspberry filling was AMAZING.  But when it came time to assemble the cake, it was just so moist that it fell apart as soon as I filled and stacked it.  I was rushing.  I didn’t want to chill the cake layers first.  It was a disaster.  Everyone who was following my struggle on my Facebook page suggested that I turn the cake into a trifle… but, by the time I had calmed down from being so mad… it was too late.  The cake was in the trash.  Bummer.

You know – it’s probably a good thing though that I had to start over, because if we’re being honest here… that cake isn’t what I really wanted.  Huh?  You might be saying to yourself?  What?  Yah… I know.  I’m a little nutty.  I wanted the same ole chocolate cake I’ve made a hundred times before.  That dark chocolate cake that is so efffffffing delicious, I dream about it when I haven’t had it in a while.  And yeah- that’s what I should have made yesterday. 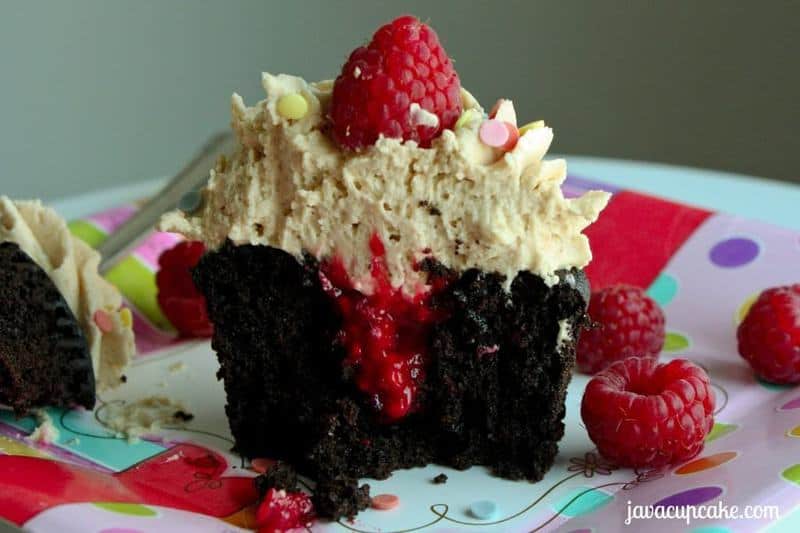 So this morning… I did.  I got up early and whipped up a dozen dark chocolate cupcakes using my most favorite cupcake recipe.  I then filled those cupcakes with the raspberry filling I made for yesterdays cake and then topped it all off with my favorite peanut butter buttercream.

Since I’ve made all of these ingredients on my blog before… I’m not going to rewrite everything here… instead, I’ll just give you links and explain to you how I assembled them all.

FYI- those liners I’m using came from Sweets & Treats Boutique!  They sent me a sampler pack and I can’t stop using them! I LOVE how they look with chocolate cupcakes and I love the variety in designs!

Oh – and that fork? Isn’t it TO DIE FOR?  Goozeberry Hill custom made it for me!!  I absolutely LOVE it!  You can have your own custom made… just go HERE! 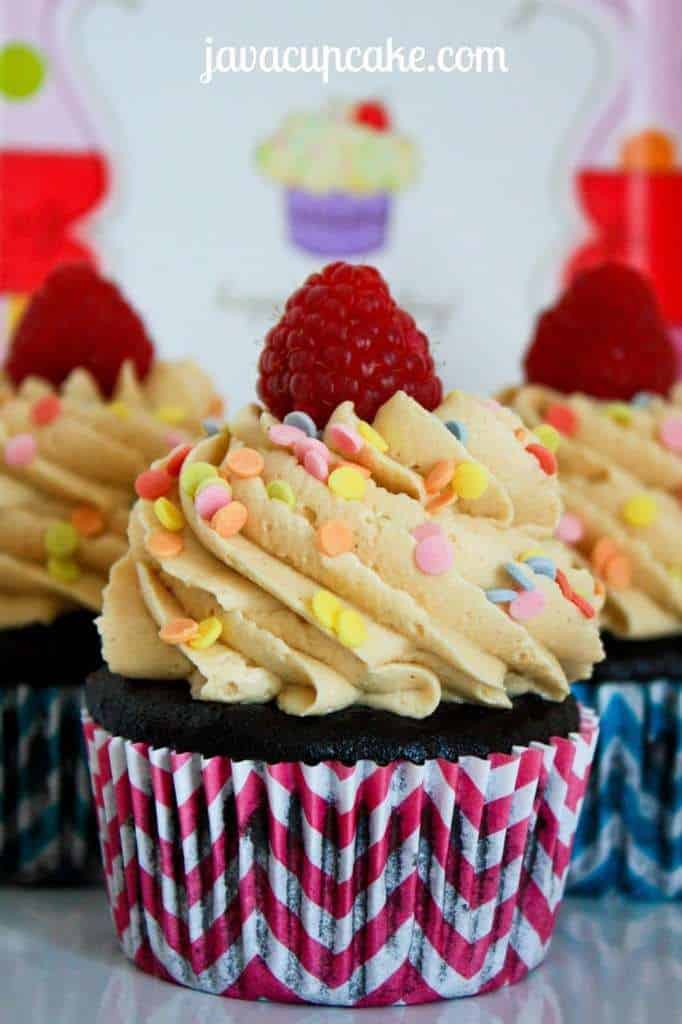 And cause he’s so darn cute… I had to share a picture of Matthew! He’s 11 months old and practicing for his 1st birthday by licking the peanut butter buttercream off the beater!  I love this baby boy! 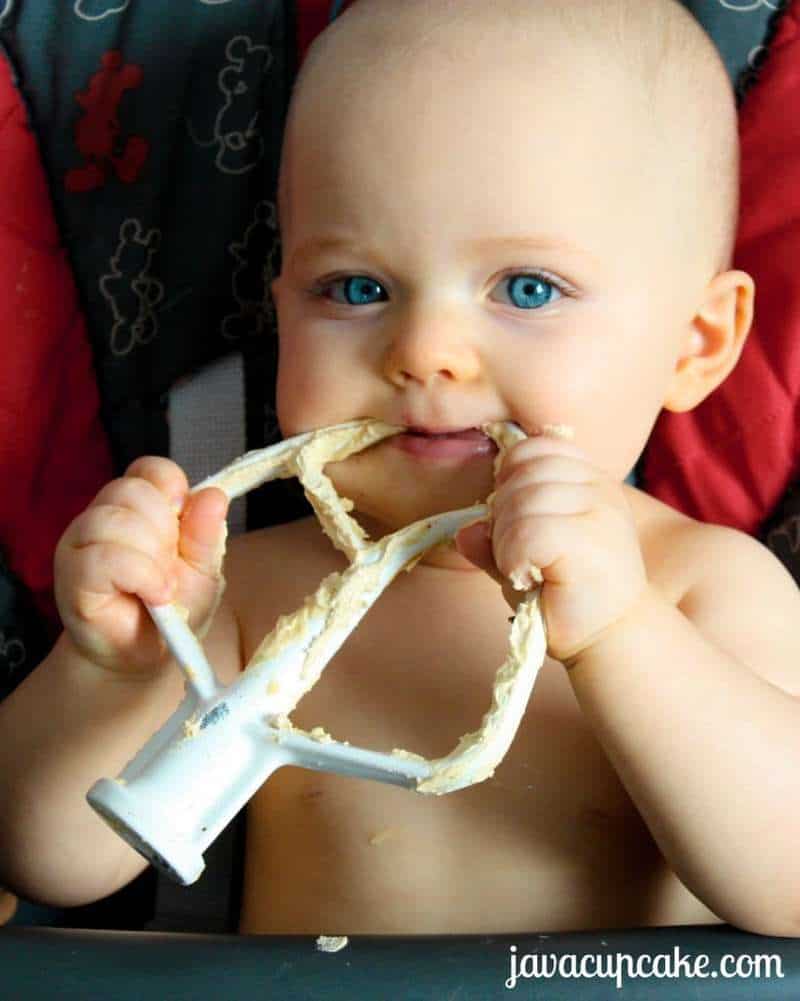 Hi! I was wondering if i could switch out the raspberries for strawberries? And also should this recipe make at least 24 cupcakes if i double it? And if i double it i don't need to double the fulling and icing, and just double the cupcake recipe?? I would really appreciate it if you could get back to me within a day. Thanks!

Happy Birthday Betsy! Your cupcakes look extra special for such a special celebration! I really love those raspberries in there!