I wasn’t going to write up a blog post for these cupcakes, but they came out really awesome looking, so here it is.  I had a request for my Tagalong Cucpakes, which was easy enough… but because Girl Scout cookies aren’t exactly in season right now, I wanted to top the cupcakes with another cookie, equally as delicious as a Tagalong.  I thought that Keebler made a cookie that was similar to the Tagalong, but of course the commissary here in Germany didn’t sell them.   So while paroozing the cookie isle at the store, I came across the Nutter Butters and thought they would be perfect!

I decided to jazz them up a bit (Wait, how old am I? Did I just say “jazz them up?” hahaha) by dipping them in chocolate and nuts.  I thought that made for a very dramatic effect on the top of these cupcakes!

I used the same recipe for the Nutter Butter cupcakes that I used for the Tagalong cupcakes… so you can find that recipe HERE.  I did make a few changes though… 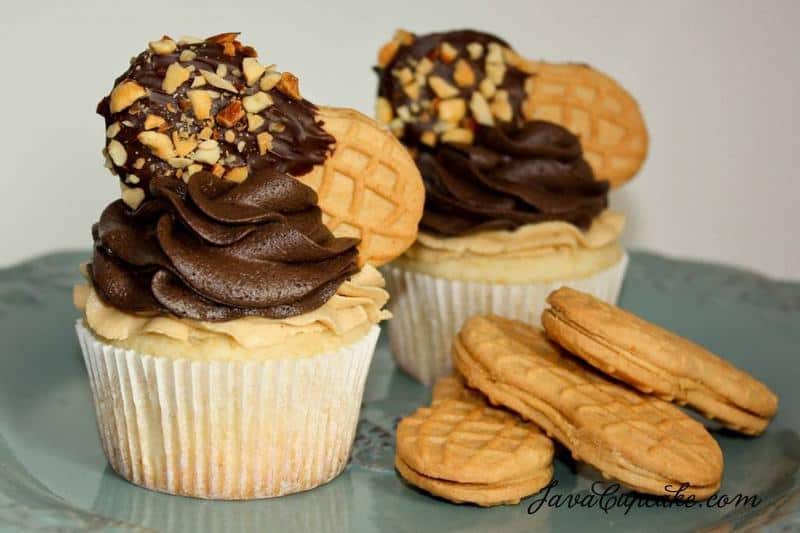 I think I might end up dreaming about that chocolate buttercream tonight. It looks amazing!

These are going on my "must bake" list! They look amazing!

Awesome!! Let me know when you bake them.... take lots of pictures!!! xoxo

Excellent post! This chocolate nutter butter cupcakes looks delicious and yummy. I really enjoy this post specially the way of making of cupcakes. Thanks for the great effort and excellent share.

These cupcakes look so delicious!!! And I love tagalong cookies :D

Me too!! I love anything chocolate and peanut butter!!!