Cinnamon rolls are an ooey gooey cinnamon sugar treat that EVERYONE loves.  But when I saw cinnamon rolls as cupcakes on Pinterest I knew these were right up my alley.

I took a basic cinnamon roll recipe, rolled them small and baked them in Cupcake liners then topped them with a basic frosting.  Fresh from the oven or warmed up 3 days later, these cinnamon rolls will be a delicious delight for your belly! 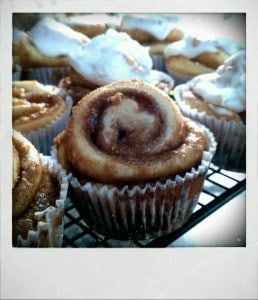 Is it okay to substitute bread flour with all purpose flour?

If that's all you have on hand... sure you can sub it. The texture of the cupcake may be more chewy with an elastic like crumb with the bread flour. Happy Baking!

Did u use a regular cupcake pan or a mini one. ?

Did you bake this in a cupcake pan?

I'd like to bring these into the office as fresh as possible. Any suggestions other than getting up at 3 a.m. to start them?

After you have cut the dough into the separate pieces you can freeze them!

Make them the night before and frost them in the morning. :) If you have a microwave at work, heat them up to soften then frost them there. The frosting will be all melty and gooey and the rolls soft. :)