I don’t mess around too much with classic Cupcake combos… like chocolate & vanilla.  I have a fav chocolate cake recipe that I love and I’ve recently become attached to the most amazing, light & fluffy vanilla buttercream but, when it comes to dressin’ them up a bit… that’s where I get to have a little bit of fun!

I like to think that less is more… so I’m not going to hate on lots of sprinkles or anything like that… but I prefer a little bit of fancy that goes a long way.  These cupcakes were for a 1st birthday party with a bumblebee theme.  I saw a bunch of tutorials online that made super cute bumblebees but I didn’t really feel like messing around with fondant and I didn’t really want them to be cartoony… so I went with a modified version of a Martha Stewart tutorial.

I don’t have pics of how I piped everything, because good grief is it hard to take pics without a timer lol, but I will tell you what I did and hopefully that helps a bit! I’m making lady bugs this weekend with the same concept, so I’ll let you know how they turn out! 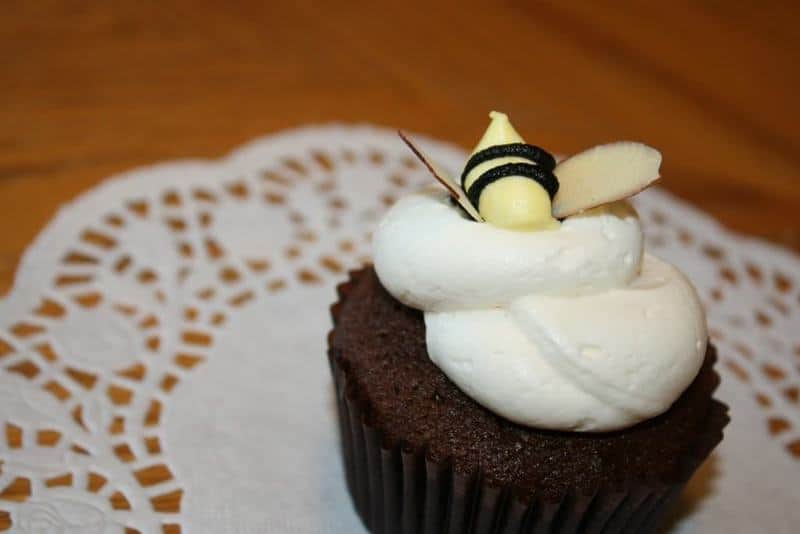 Question - if I add pudding box will I need an extra something to adjust recipe?

Hello :) I've been looking everywhere for a simple chocolate cupcake recipe and I think I've found it. I was reading the recipe and it says 2 cups flour. What kind AP, cake??

When the recipe calls for flour... it typically means AP flour :)

I'm going to make this for my cousins first birthday!! This might sound weird but yes, I'm 10 and baking for parties!! Well, some people think it's weird. I don't because lots of other people bake right??

Maria! Let us know how they turn out for you!!! So excited to see you have a passion for baking at so young! Keep it up! <3 Betsy

Love the bumblebee... so cute! You are so super creative and talented!!