Ever since National Doughnut Day I’ve been wanting to make these cupcakes.  I love me a jelly doughnut and what better doughnut to make than a jelly filled one.  I had seen other recipes for doughnuts similar, but none that included a glaze and a filling… because seriously, what’s a doughnut without a delicious coating of glaze!?!? YUM!

I think the key to this recipe is the hint of maple syrup and the cinnamon. There is just enough of each to add a flavor that makes these cupcakes stand out from a regular white or vanilla cupcake. I also used my favorite store bought raspberry jam to fill them. You could use any filling you wanted really… the possibilities are endless.

At the party I served these at, I think I ate three. Yeah, they were THAT good! 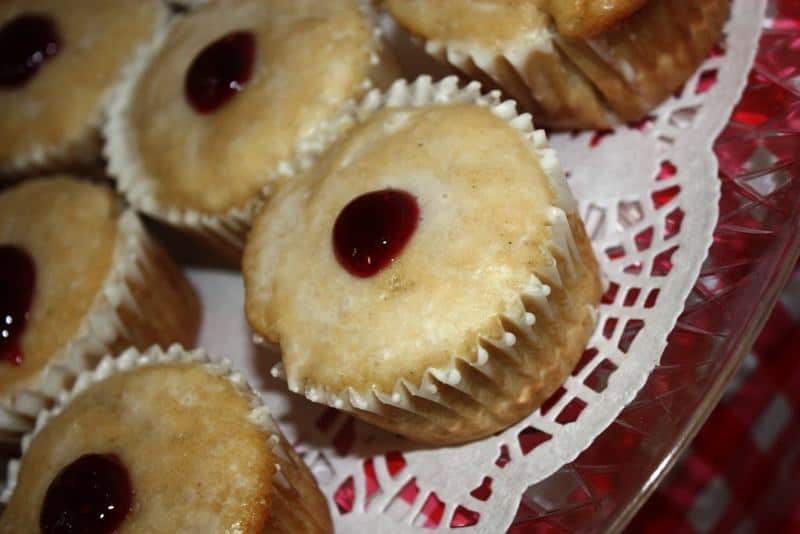 1 cup of your favorite jam or curd
vanilla glaze

Tips & Tricks:
Have you ever wondered what it really meant to “cream together” two things?  To me… it means throwing those items in my stand mixer, turning it on high then walking away for at least 4-5 minutes.  Seriously,  walk away.  I might come back once to scrape the sides of the bowl down, but I really need the mixer to do it’s thing and bring together the ingredients, usually butter and sugars.  Sometimes, I might even throw in the eggs and go for another 2-3 mins. You want that creamed mixture to be light, fluffy and all the sugars broken down.  It really makes a huge difference in the final product!

I stumbled upon this blog through the web in search of a recipe for a jelly donut! I found this to be a great twist on a traditional treat! My husband and I made it for Hanukkah dessert followed the recipe exactly, and they turned out amazing! A big hit! Although this recipe wasn't enough batter to make 2 dozen, we only filled about 15 cupcakes. But either way thanks for this delicious recipe!!

Awesome Shannon! I'm so glad you liked them! Happy Hanukkah! :)

I can't wait to try these! Look amazing and sound easy enough. I have a lemon curd recipe I saw on twitter ( it fits into one tweet) that is made with parsnips that I have been wanting to try.. sounds like the two of them will go together wonderful.

I can't wait to try this recipe! I have been looking for one with a filling and a glaze and this seems perfect! How many cupcakes did this make?