As I was leaving the United States on Tuesday, I stopped by the airport Starbucks to sample the new Cake Pops.  I had been told they were to debut that day and to look for them. So I wait in the super long long, only to be disapopinted.  No Cake Pops yet.

Seriously? No Cake Pops in Seattle? I mean really… of all places, you’d think that SEATTLE would get the cake pops first. I was so bummed they didn’t have any. I really hoped to try them before I left for Germany.

So, we land in Frankfurt and right off the airplane I see a Starbucks. Could they have the Cake Pops I couldn’t find in Seattle? YESSSSSSSSSSS! They had Cake Pops!! I had travel around the world to find them…. but I was SO DAMN EXCITED I had to scoop one up and try it!

I got the pink of of course. Now, I’m showing you a Starbucks stock photo here because all I had with me at the time was my camera phone and it takes crappy pictures. But, mine looked exactly like the one from Starbucks!

It’s vanilla cake with vanilla icing, dipped in chocolate and pink sprinkles!  (The other one in the picture is the Rocky Road. I know, I should have tried it too, but I just got the one, for now.) 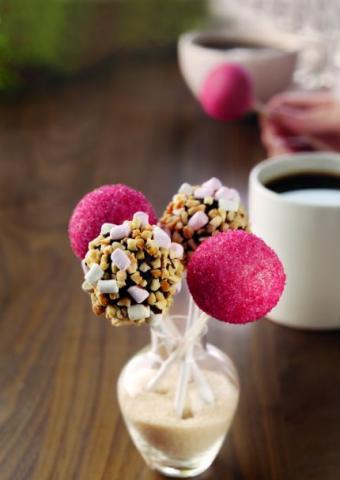 First initial reaction…. YUM!  Finally, a dessert that Starbucks can be proud of.  I mean really… this cake pop was moist, full of flavor and really SO GOOD.  The candy coating was just enough crunch to add texture and the sweetness of the sugar crystals on the outside was perfect.  I would definitely recommend this little treat to anyone needing a sugar fix.

Once I find out where the Starbucks is around the military base… I’ll be sure to try the other Cake Pop flavors, whoopie pies and mini cupcakes!

really i was not impressed with the cake pops and especially for that price..also their whoopies were not very good..i guess im just fussy when it comes to baked goods, and really the price for these, come on starbucks, i think why mine didnt taste as well is because it was probly sitting there for days because of pricing nobody buying in our neighborhood store..

So glad you got to try one!

Agreed: millions better than their awful cupcakes! The rocky road is also delish, but I found the tiramisu to be bland. The pink was by far my favorite =)

Hope you're doing well in your new home!