I almost missed these cupcakes.  Which, would have been an epic tragedy all in itself.  Luckily, my daughter spotted these in a little cafe close to our hotel here in Grafenwöhr, Germany.

We had really just stopped in for ice cream but was distracted by the case with the cupcakes in them! I literally almost lost my mind when I saw them!! Sweet little vanilla cupcakes topped with a beautiful mound of chocolate goodness. Not to mention the lemon tart and tiramisu that was also in the case with these cupcakes!

This little shop I’m in, Emi Nails & Coffee Bar, well… it’s also a coffee shop, nail salon, ice creamery and cafe!  I’ve never been in anything quite like it.  While getting your nails done, you can enjoy some cupcakes, ice cream and coffee.  This day, Emily had ice cream, I had a Cupcake and Dave had a lice of lemon tarte. 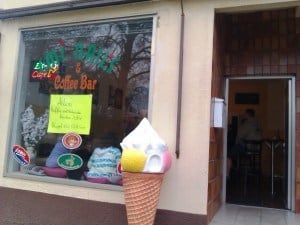 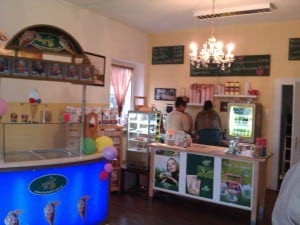 (Sorry about the crappy photo quality.  I wasn’t expecting to run into cupcakes, so I didn’t bring my camera, just our phone!

Now, the first thing I notice is that they aren’t called cupcakes in this shop. They’re referred to as muffins. I’m wondering if that’s a German thing or what? But I couldn’t seem to call them a muffin. I mean, there was no fruit and there was frosting. lol It’s a cupcake. Seriously. 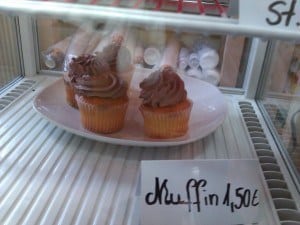 Also in the case was a beautiful lemon torte and tiramisu.  I wanted to try them all.  Yum.   But, we just settled for the tarte and cupcake!

The lemon tart was simply divine.  I expected it to just be cut and served on a plate, but this Germany cafe had other things in mind.  First, she dusted the plate with powdered sugar, put two swirls of chocolate on the plate, cut a generous serving of tart onto the plate then garnished it with a sweet berry.  (Not sure what kind of berry it was, but it was SO GOOD.)  Wow.  Simply beautiful.

The tart itself had a buttery crust, sweet lemon curd type filling and a toasted meringue top.  It was like an explosion of lemon in my mouth with every bite.  SO GOOD.  The lady at the shop told me a friend of the owners makes them for the shop everyday.  Seriously, whoever that person is, well, they’re my new BFF.  YUM!

Now, on to the best part… the cupcakes!!  My little cupcake was also served on a plate dusted with powdered sugar and garnished with a berry.  I don’t think I’ve ever been in a cupcake shop in the USA that served a cupcake like this! 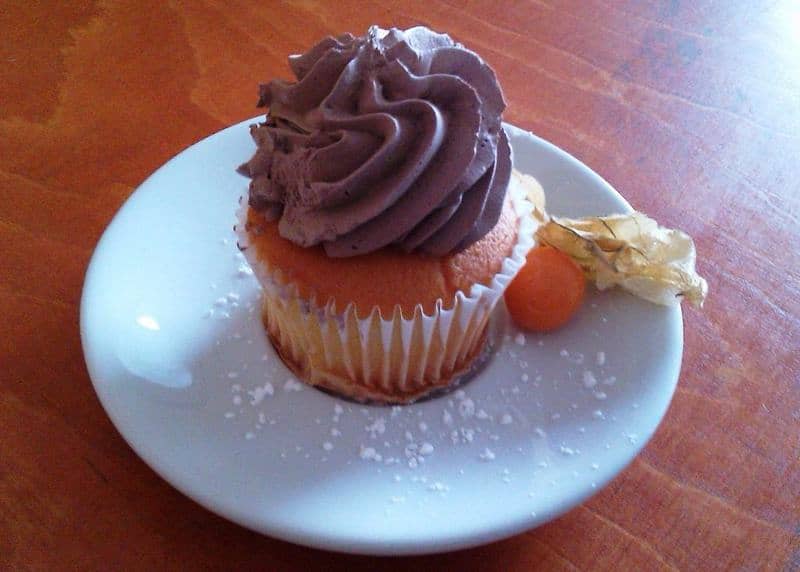 My first bite was of the cake.  It was moist, dense and full of great flavor.  As I took a few more bites of it, I realized that it was more like a pound cake than it was a crumby, typical American cake.  Nevertheless, it was DELISH.

On to the chocolate frosting.  At first, I couldn’t put my finger on it, but it was different.  It didn’t have a strong chocolate flavor and the consistency was unlike American frosting.  Then, it dawned on me.  It’s a mousse!  The frosting on this cupcake was a chocolate mousse! Thick and creamy.

Now, I’m not gonna say this is the best cupcake I’ve ever had (cause really, nothing has been able to compare to the cupcakes at New York Cupcakes in Bellevue, WA), but these were definitely an experience!  I’m really excited to find more cupcakes in Germany to see how they compare to these and to American cupcakes.  From what I’ve read and heard from others here in Germany, cupcakes aren’t too popular here or haven’t really caught on like they have in the States.  Soon though, I’ll venture to a bigger city to look for a cupcake shop!

Until then, I’ll just walk down the street to this cafe/nail shop to get my cupcake fix! 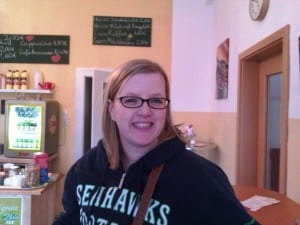 I love Mandy and Jessica. I get my nails done there at Emi all the time. I'm not a coffee drinker but I always get a Latta there, it's so yummy.

Hey there! I'm new here in Germany also... Well since August of last year 2010. (Hubby's in the Army) But I too am on a little mission (kinda) to hunt down cupcake shops around here... I've been to the one in Stuttgart, the Cupcake Boutique. I can say the cupcakes are pretty good, moist and flavorful... especially after it had been through a 2hour drive back home (Mannheim). I can't wait to visit the one in Frankfurt, I'm guessing it's near the airport, but we'll see!

Where all have you been around here?!? I just now saw your blog since im looking for the next cupcake place to visit, so idk if you mentioned any other shops you've been around here. :)

We are here in Graf... where are you guys? And... I've been to only one cupcake shop, which was in Munich! And... I haven't posted the review yet... probably this coming week! I have just been busy! I am hoping to get to Frankfurt this summer to get to Jenny's Cupcakes to try theirs... and maybe Berlin, there is a shop there too! I'll be checking out for sure the one you mentioned in Stuttgart!! :) Awesome to connect with you.... looking forward to hearing more about your cupcake adventures in Germany!

Next time I make it to Grafenwoehr to go to the PX I'll have to find the bakery you went to......as we've been here almost 5 years already and I rarely if ever see cupcakes. German bakeries are very yummy....just different than in the states. Welcome to Germany.....I hope you enjoy it here. We love it....even extended so we could be here longer :).

I've seen cupcakes at the shopettes... but I've been afraid to try them. I don't even know if they're local! Eeek! I've been invited to the other cupcake shops in the larger cities to visit... Munich, Frankfurt, etc etc... and I hope to get to them soon!! Seriously though... great to hear of another person living in the area! Let's connect!

I live in Osnabrueck, thats near Hannover in the North-West of Germany.

Its great to have such a talented blogger in our country and I'm sure that the people will love your cupcakes and other baked goods :)

And as a German I can say: I discovered the difference between a muffin and a cupcake a year ago. And I'm a baking addict & very interested in the American way of baking. So I think it will take a few years before everyone here will recognize the big difference - haha :D

Hannah... Thanks for reading my blog!! And... I hope to bring lots of American cupcakes to Germany!! :) Where in Germany are you?