Food Network’s Cupcake Wars started this week with two episodes.  Sunday’s was the George Lopez celebrity golf tournament episode and Tuesday was the SeaWorld episode.  I wasn’t able to catch Sunday’s episode, but I did see the SeaWorld episode… and let me tell you right off the bat, I was NOT impressed. 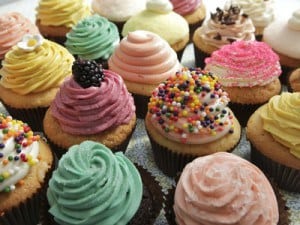 Granted this is a new series and they are still working out all the kinks… but COME ON Food Network!!!  To me, it seemed as though Cupcakes Wars was just like any other food competition show with cupcakes tossed in as the main attraction.  You could have substituted any novelty food in this show and it wouldn’t have made any difference.  There was nothing special about having cupcakes as the center piece of this show!  I expected spectacular challenges and even more spectacular cupcakes!  What we got were cupcakes that (no offense to any of the participants) could have been created in my home kitchen.

Now… I do understand that they had limited time to prep and bake… but as professional cupcake bakers, I just expected more.  More cupcake, more elaborate decorating, more pizazz in presentation.  For example, during the decorating challenge of the SeaWorld episode, the bakers (oh by the way, they called them cupcake makers, instead of what they are… bakers! That errked me!) needed to include an element of SeaWorld into their cupcakes.  Two of the bakers produced cupcakes with the whale from SeaWorld on top… but, they were very poorly made, elementary looking, and lacked in detail.  (I’m sorry I can’t produce pictures of these whales… I’ve searched the internet looking for pictures or video from last night’s episode, but can’t find any.  If they ever turn up, I’ll update this post.)  Now, if it were me…. I would have produced a cupcake with a whale that looked like this cupcake by New York Cupcakes in Bellevue, WA.

Another thing I didn’t really like with the show was the unreasonable expectations the bakers faced in regards to time.  The final challenge had them create 1000 cupcakes, build a display and put it all together in 2 hours.  Is that really even physically possible?? The time factor may be the biggest reason I was disappointed with the cupcakes… there wasn’t enough time to create those “WOW” cupcakes I was looking for.  *sigh*

I’m going to give the show a chance… I really am.  I will keep watching it and keep hoping that it improves.  Maybe by the time Season 2 rolls around (if there is a season 2) they’ll have gotten a clue and changed up the format.

It’s cupcake vs. cupcake in Food Network’s tastiest competition yet! Each week onCupcake Wars, four of the country’s top cupcake bakers face off in three elimination challenges until only one decorator remains. The sweet prize: $10,000 and the opportunity to showcase their cupcakes at the winning gig. Whether a special Ace of Cakes anniversary celebration, a star-studded magazine party or an A-list celebrity golf tournament, these Cupcakes Wars really heat up. Candace Nelson (owner of Sprinkles Cupcakes) and Florian Bellanger (chef and co-owner of online macaroon company MadMac) serve as permanent judges with a third rotating judge each week, and Justin Willman hosts.

I enjoy cupcake wars with all the unusual flavors. But I really hate really really hate almost to the point where I can't watch the show is these women with their long hair hanging down In front of their faces. I'm watching one now la bridal bash With a redhead that has a blue headband it's really grossing me out

Good point, Gwen! Put on a hat or get a hair tie!

This is the "worst" show of its genre on the foodnetwork. The presenter is "super nasty" and so are the judges that NEVER change (Why not? What makes them so invisible?) I feel really sorry for the participants. They put everything they have out there. But they are faced with "super super NASTY" judging.

Compare this with a much tougher show "chopped". Judges change and are very tough, but participants interact at a table and, often, they congratulate each other or even (very rarely) get offered the "measurable" present of 10000. NEVER on cupcake wars!

I have noticed that sometimes some "losers" congratulate the "winners" but are totally ignored by them. How "disgusting"!

The judges on Cupcake Wars are "EXTREMELY nasty" and ESPECIALLY the presenter (Does he know anything about baking? I don't think so!.) There don't display an ounce of "human-ness", It's all about the "winner and the loser". What a pity! How "pathetic" and "depressing"!

It is designed that way because of the judges and the even more "pompously negative" presenter!

I don't think I agree, only because I thought the show did pose a lot of challenges. Maybe I'm just too newb of a baker, but creating a cupcake flavor with seaweed and sea salt seems difficult to me. Plus I had no idea they got knocked out in rounds, which to me was also pretty competition based. The judging was way harsher then the other cake competition shows I've seen so titling the show "wars" seems very appropriate. Time is a factor in every food competition show, which is much of the point. If you had a day to create a cupcake display they would probably range pretty close in comparison. Didn't think both sets of whales looked bad, but again that's the time constraint I thought they were under. Good review though, and glad others are watching from a baker perspective!

This program hasn't aired yet in the uk but when it does I'll be watching. Then I'll be able to give my opinion for what it's worth lol. I don't see how anyone can make,decorate and present 1000 cupcakes without alot of help and only 1 oven.

To me the perfect cupcake is one that is perfect cake and frosting wise. I'm not one for fireworks or elaborate displays on cupcakes. Simple,clean & classic in look and a KNOCK YOU OUT flavor!That was what I was hoping to see on Cupcake Wars. While I will agree 1k cupcakes in 2hrs seems more towards the Cake challenge they do on Food Network, what we don't see is how many helpers or ovens they also have lurking in places we're not accessible to. I am a lone baker, just me, no helpers or aids in any way. I'd love to go on here and give it all I've got. Knowing my luck it would be the day they wanted fireworks and crazy decorating, not flavor ;-)