Have you ever hosted a child’s birthday party at home? Have you ever wondered how to stop 15 sugar-filled children running around your kitchen and climbing on your gloss dining table and chairs? Instead of hosting your child’s next birthday at home, why not bring the party to their school?! Use this How to Host a Paw Patrol Party at School guide for inspiration and recipes! 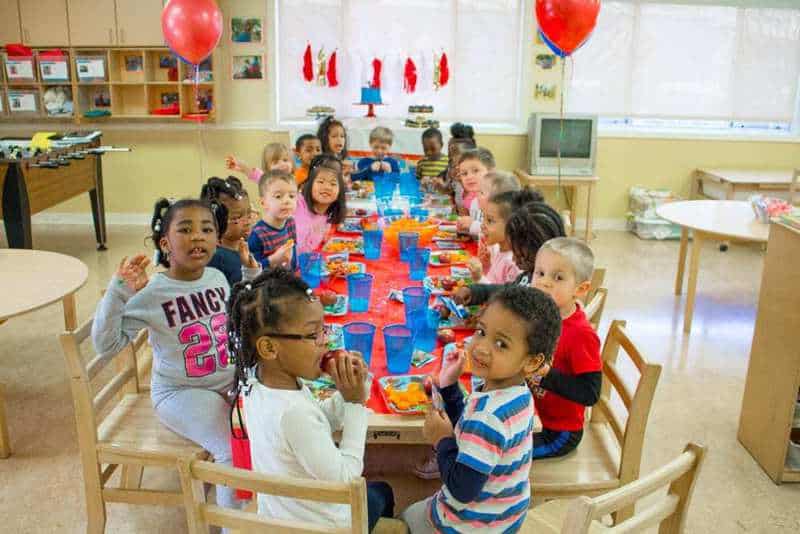 Sometimes hosting a party for your kids can be stressful! Figuring out where and when to host the party to get the greatest number of children to attend can be a chore! If your child’s school allows it, have their next party at their school. You can speak to the school about what the party will involve. If you suggest the idea of having inflatables for the kids to play on in the playground and the school agrees with it, you could get in touch with that family friend who is a kids party planner and speak to them and see if you can use the inflatables that they purchased through companies like JungleJumps. The earlier you plan this party, the more you can do to make this party so much fun for the kids! School parties mean that all your child’s friends will be there, plenty of tables and chairs, plus teachers to help! For Matty’s 5th birthday this year, we had his Paw Patrol Party at his school! It was one of the most fun parties I’ve ever hosted for him so I wanted to create a guide so that you can host a Paw Patrol Party at school too! 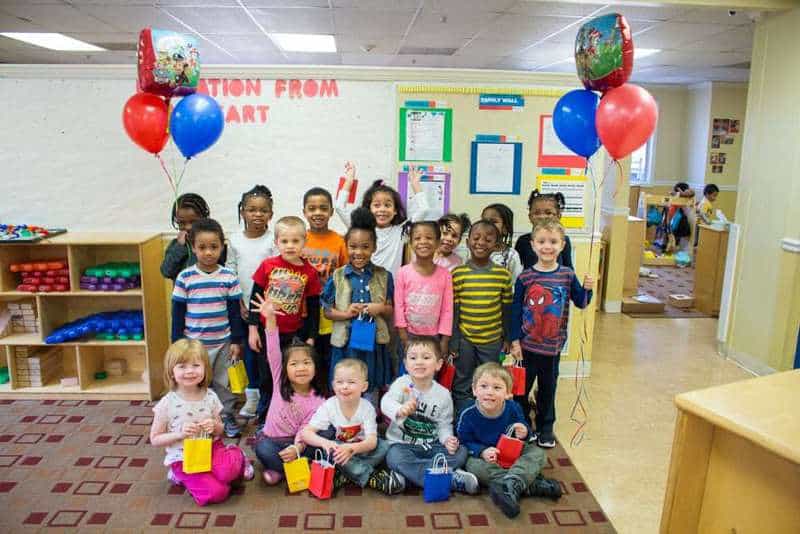 In this guide, you’ll get ideas for…

Having your child wear a shirt in the theme of the party just adds another simple dimension of fun to the entire look at feel of the event.

In the past, I’ve done matching shirts for my entire immediate family, but this year I decided to just get the birthday boy one shirt of his own to wear. 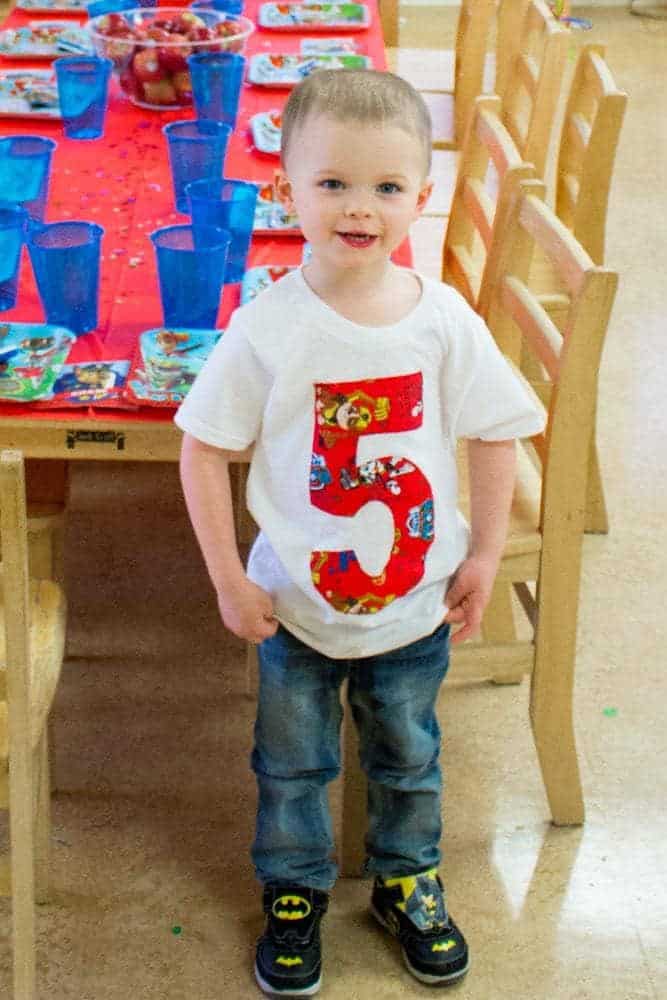 A few weeks before the party, I searched on ETSY for a birthday shirt in the Paw Patrol theme that Matty could wear to his party. I contacted Mending Life Together and asked if they could make Matty’s shirt and get it to me in time.

They worked with me to get it done and I had the shirt in time for the party!

I’m a firm believer in saving myself time, energy and stress. Which is exactly why I don’t stress about buying out Party City of plates, napkins, cups, balloons, and confetti in the theme of my party! 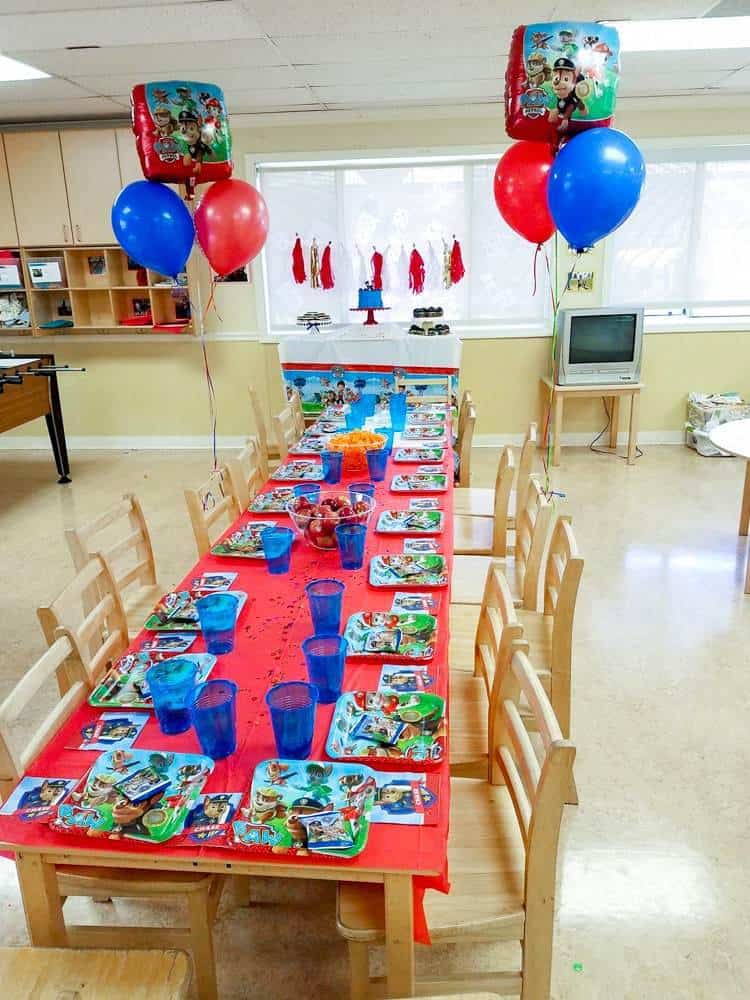 At the party store save yourself the hassle and buy the following on theme:

Get creative with the items you choose. They all don’t have to be on theme exactly, however they should all be in the same color family. 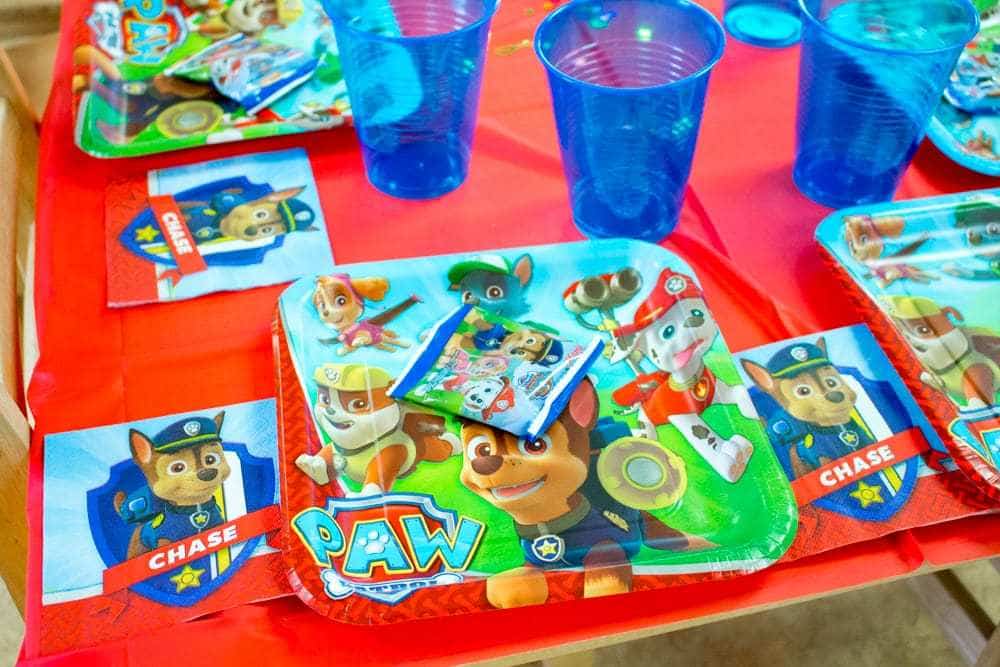 At the Paw Patrol Party, I set the table with a red table cover so that the plates and napkins would stand out against it. I choose blue cups to offset the red add another color to the table.

Simple and perfect for 5 year olds!

Planning the decor for a party for 5-year-old kids is pretty easy. They are really only impressed if their favorite characters are plastered everywhere! I only care how easy it is to clean up after the party! 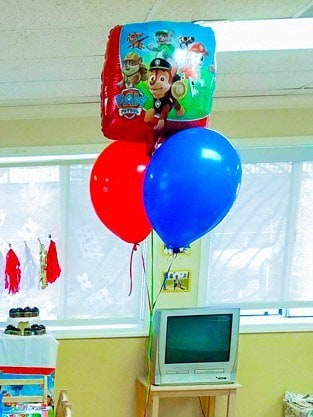 Two balloon bouquets lined each side of the table to add height to the overall look and feel of the party. I also sprinkled Paw Patrol themed confetti across the center of the table & dessert table to add a little more fun!

Since this party was happening during snack time at school, I knew that my snack should be fun but also have a healthy component. 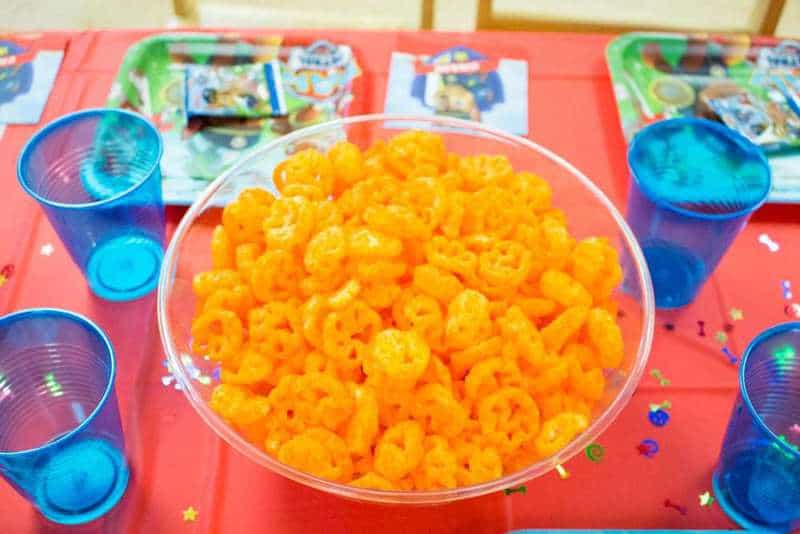 For this party, I served:

Every party I host always has some type of dessert table display. For this Paw Patrol Party, I kept it simple since we were at school. 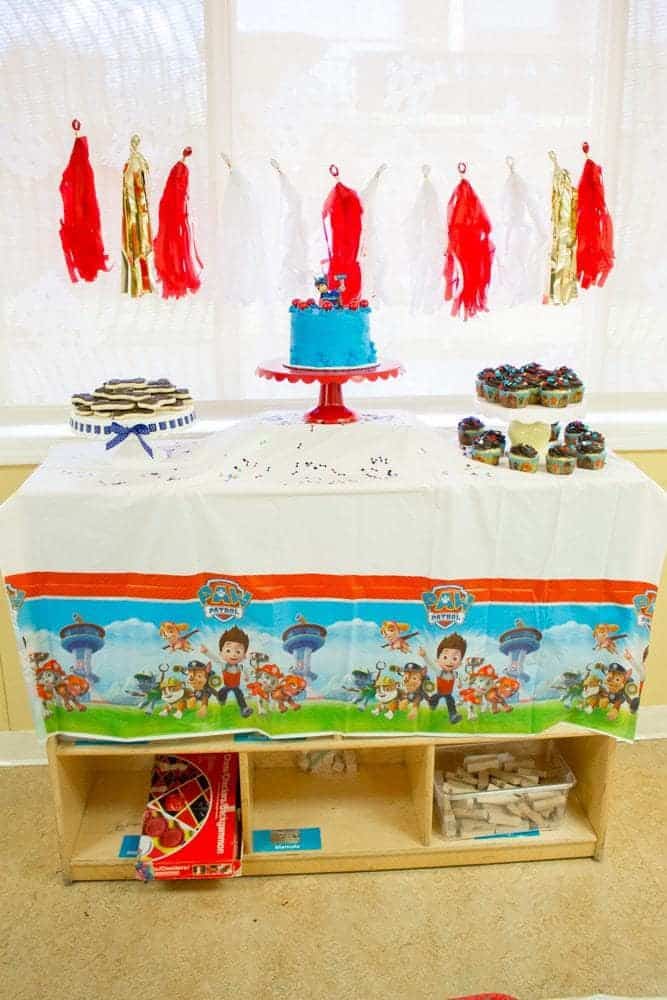 I improvised with shelving and furniture that was already in the classroom to create my Dessert Table! I cut a Paw Patrol plastic table cover to fit the shelving and sprinkles confetti over the top. 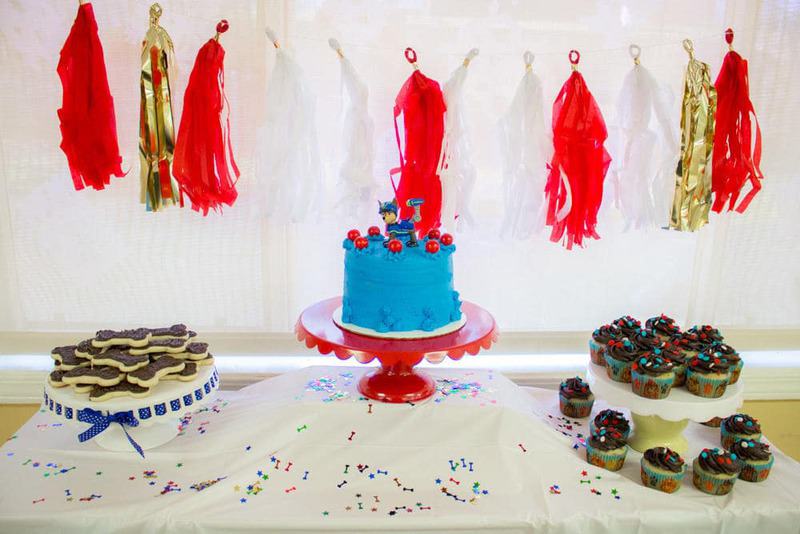 To add height and dimension to the table, I placed a small box under the table cover in the center in turn creating a higher focal point for the cake which was the centerpiece of the display.

The cake is always the star of the party. Candles are put on top and the first slice is always for the birthday boy. Since I don’t work a lot with fondant or modeling chocolate, I decided to buy a Paw Patrol toy to top the cake. 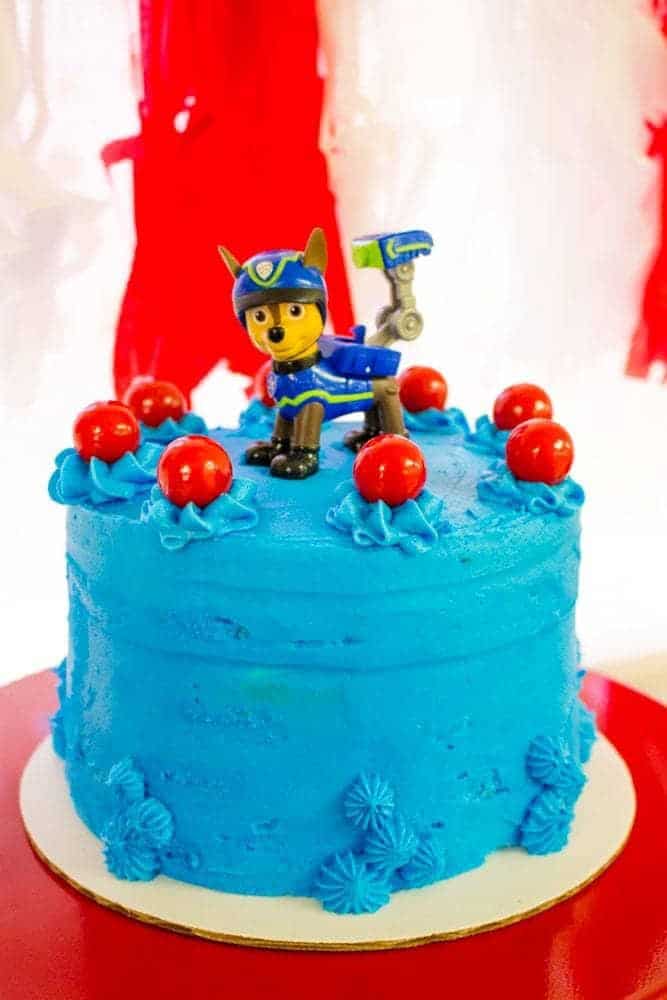 Frosting the cake in a solid color and adding simple piping embellishments allowed the topper of the cake to shine and still look clean and professional!

The cake is a funfetti box cake mix with a homemade chocolate frosting and whipped vanilla buttercream tinted blue on the outside. The red balls on top are gum balls I got at in the bulk section at the party store. 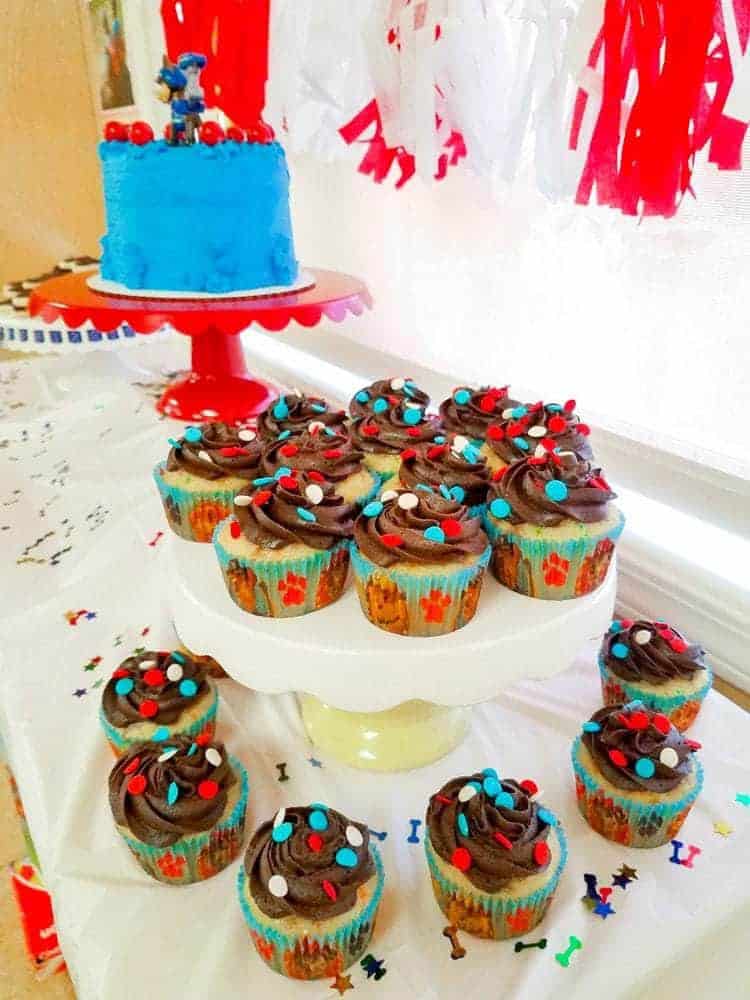 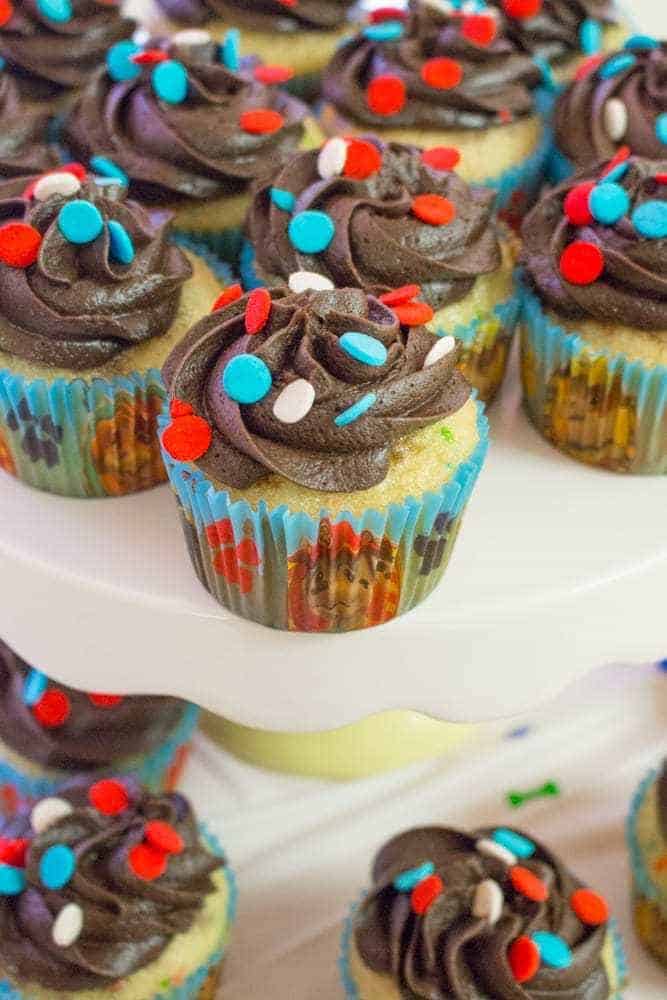 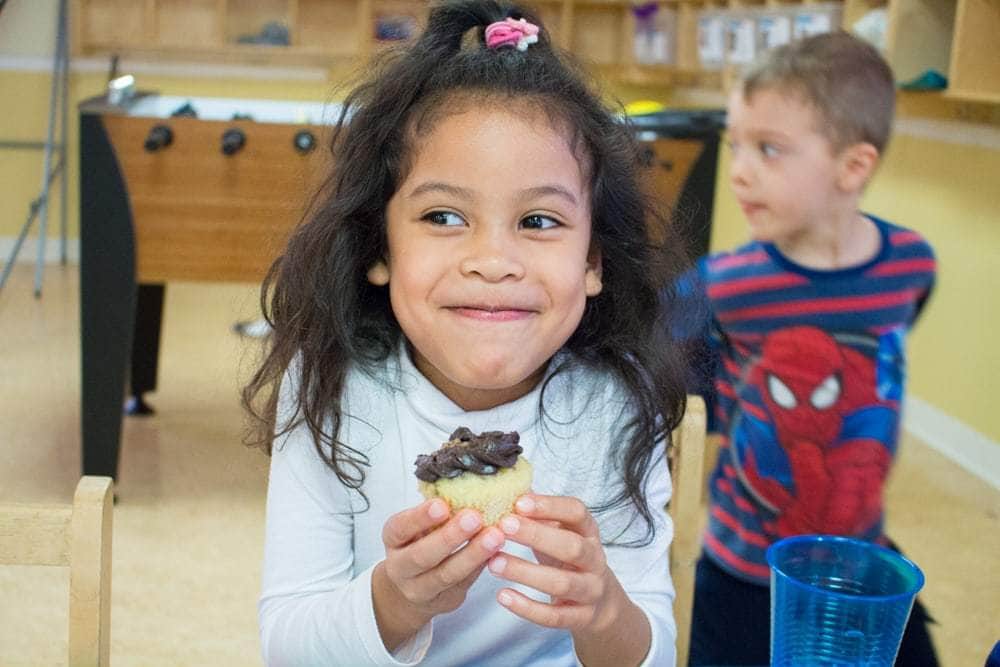 The same funfetti box cake mix was used for the cupcakes. I baked the cupcakes in Paw Patrol liners I found at the party store. The cupcakes are topped with the same chocolate frosting used on the cake and cookies.

One of the easiest ways to create another dessert on theme of your party is to make roll & cut sugar cookies using a themed cookie cutter! For this Paw Patrol Party I used a dog bone shape cutter and frosted the cookies in chocolate frosting. 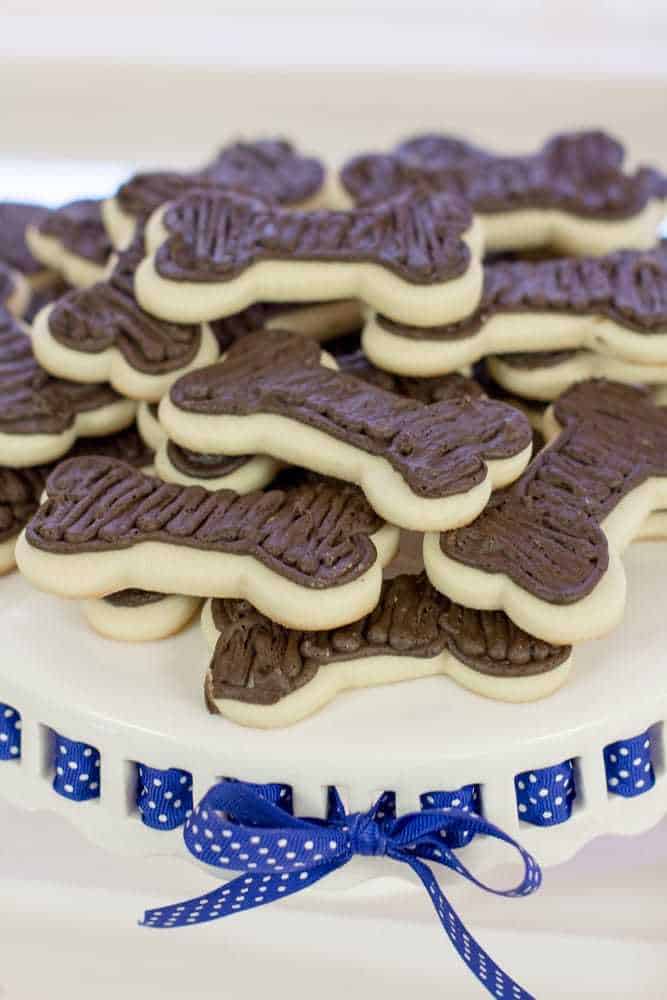 I displayed the dog bone cookies on a cake stand with blue ribbon to tie in more colors from the party. 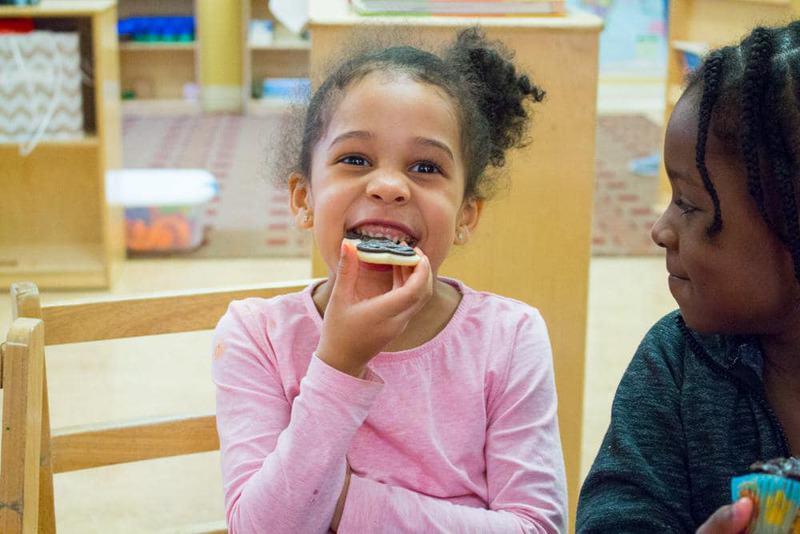 The cookies were made with my tried and true sugar cookie recipe and topped with chocolate frosting (the same used in the cake & cupcakes). I used a Wilton #4 piping tip to outline and fill the cookies with frosting. 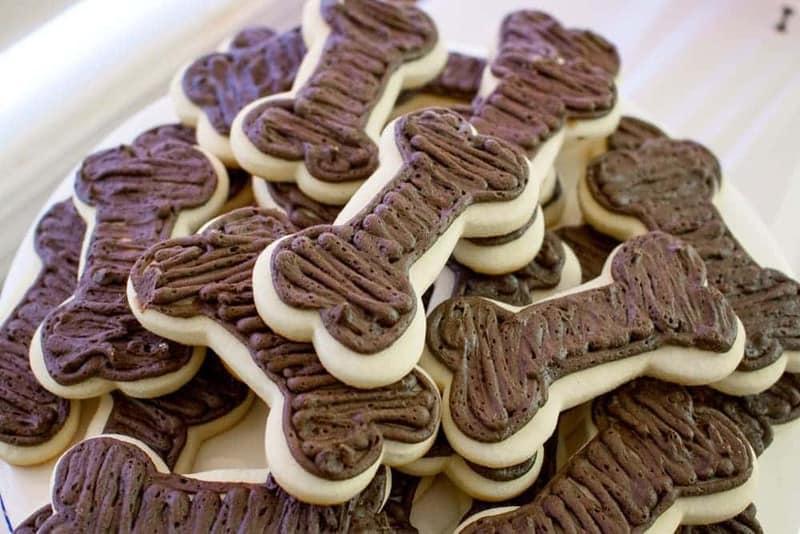 I know how short kid’s attention spans can be so I combined the party favors and games into one activity.

I set up three stations for the kids to go to. 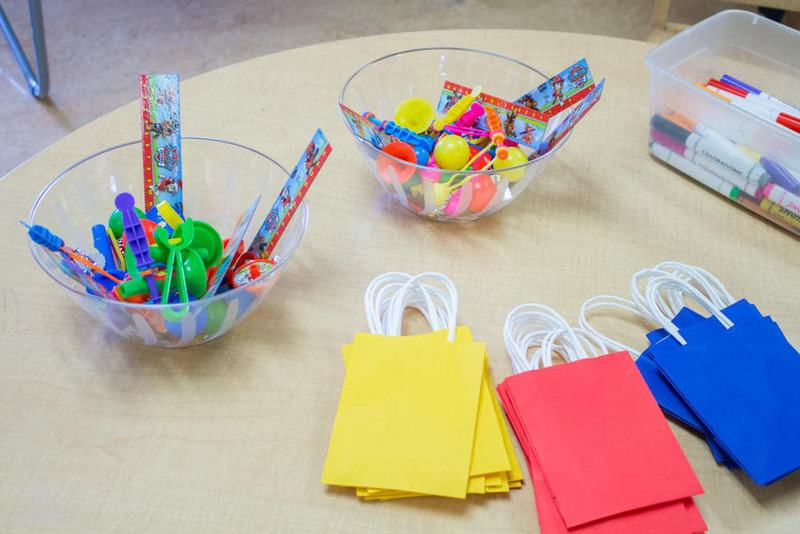 Paw Patrol themed small toys, games, rules, rings, etc from the party store.
Small paper bags and markers.
Each child will write their name on the bag then answer a fun/silly question before getting to pick out 2-3 items from each bowl. 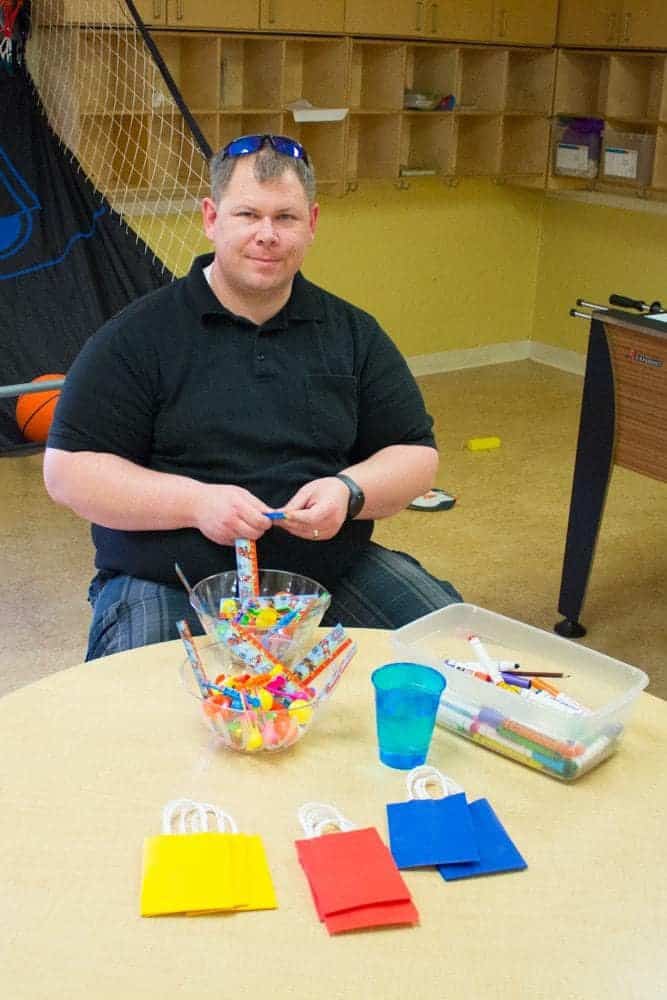 Paw Patrol themed candy plus bulk candy in the colors of the party – all from the party store.
Small paper bags and markers.
Each child will write their name on the bag then answer a fun/silly question before getting to pick out 2-3 items from each bowl. 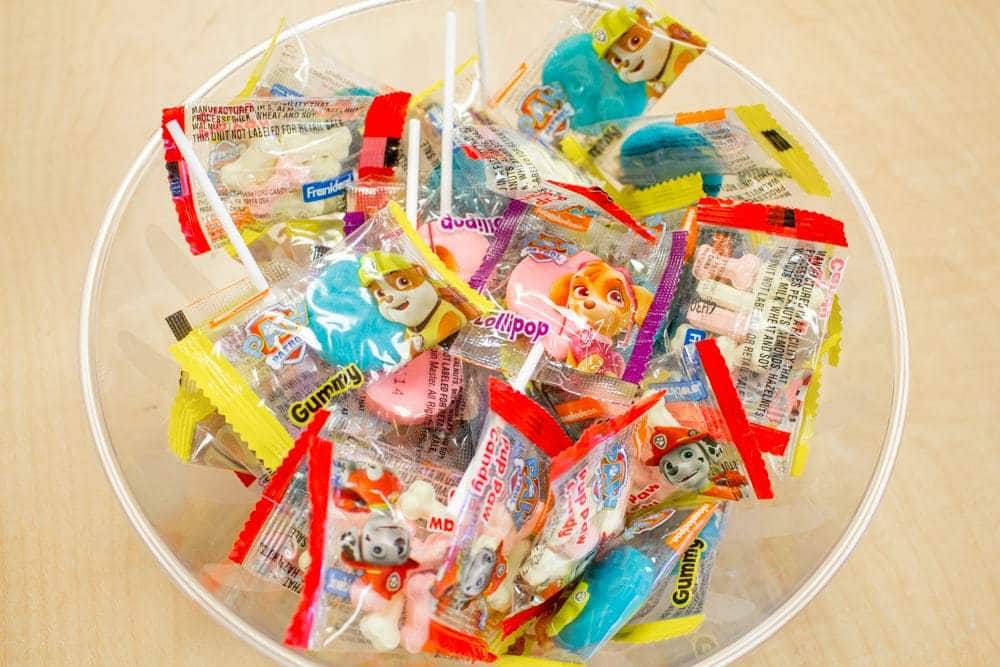 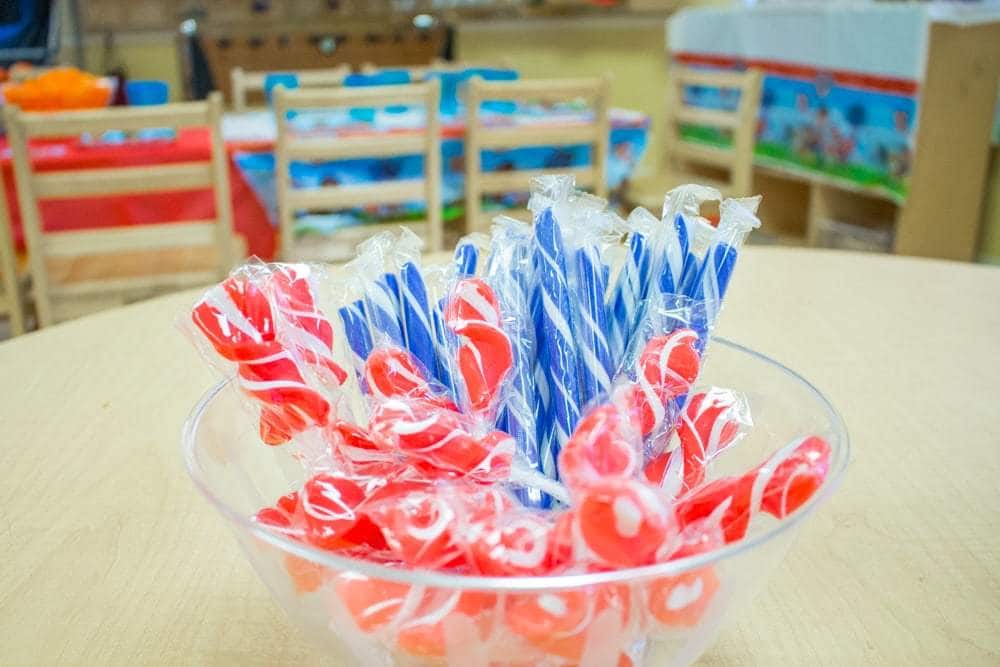 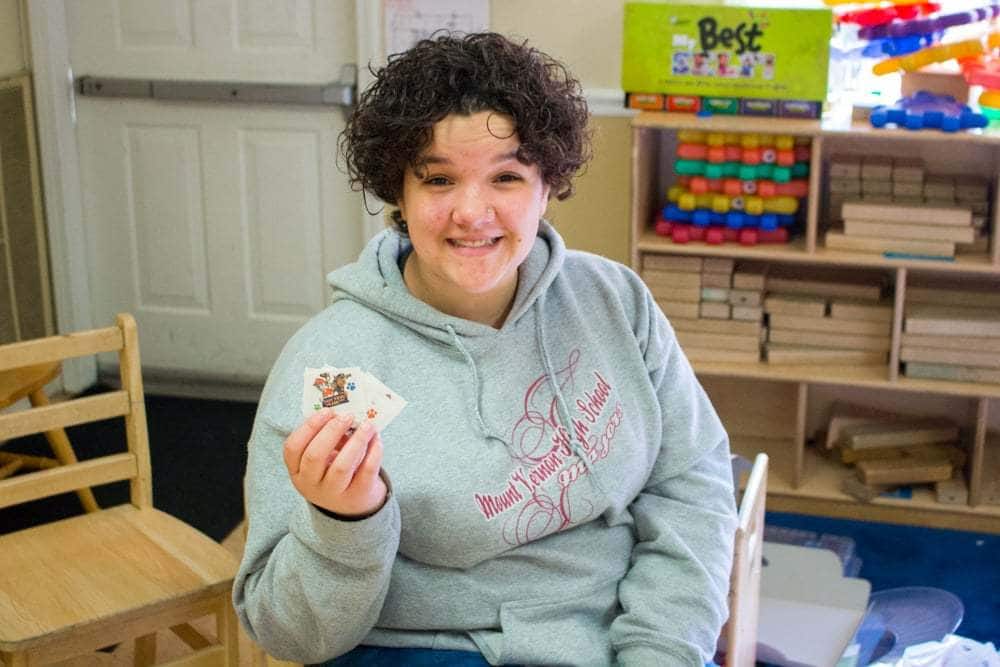 At the conclusion of the party, arrange the children with the balloons for a fun group picture! This photo can be printed and included in the thank you notes to all the children who attended the party!

Since this party was at school and on a quick timeline (only an hour for the party), I had to be realistic about the activities I had planned. If I would have had another hour to fill, I would have included an arts/crafts project and a group game that got them up and moving. 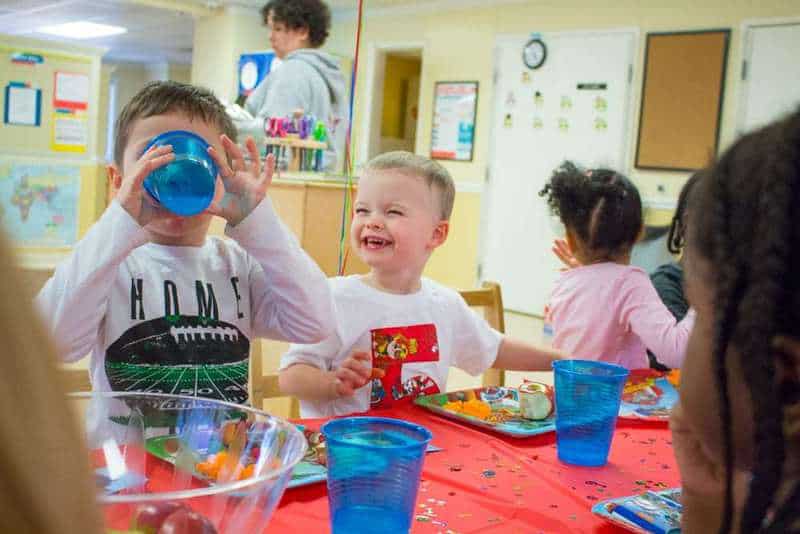 The kids had a great time and the teachers were super happy they had an easy Friday afternoon. Really, the most important thing is that my son Matty felt special.

At the end of the party he hugged me and said, “Mom, you’re the best.” So yeah, I consider this party a success! 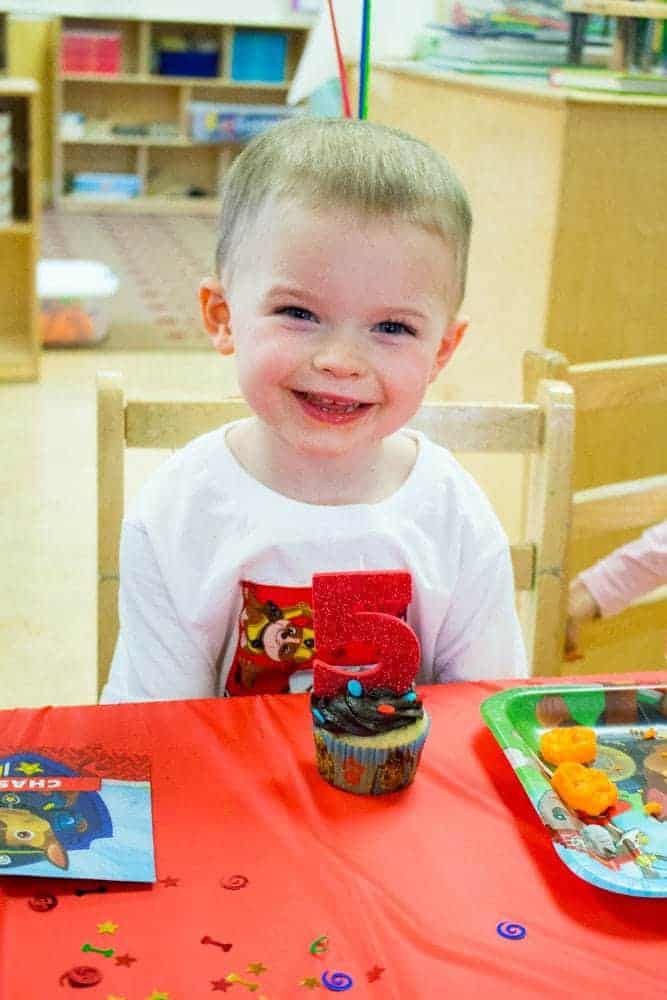 Love it! I'm going to steal some of these ideas to give my 5 year old son a Paw Patrol party this summer!