Looking for a way to reinvigorate your potato salad?  Try this generations old German Potato Salad recipe made with yellow potatoes, hard boiled eggs and pickles. 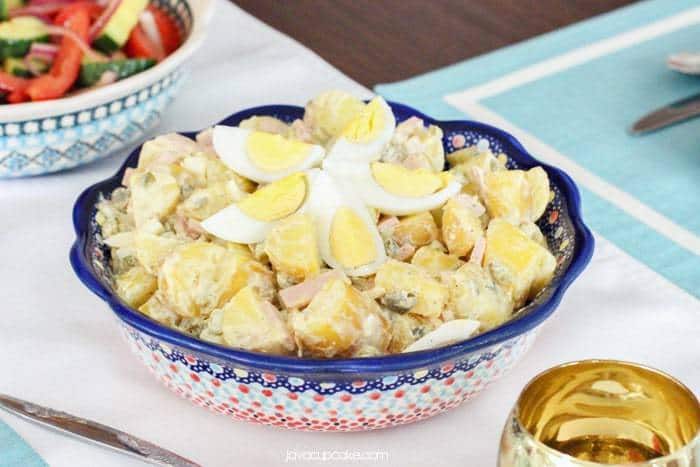 I’ve been pretty lucky with the friends I’ve made while living in Germany.  In particular, my friend Mareile and I not only share a love of coffee and our children (who are only 2 weeks apart) but we also love good food.  Mareile has dual citizenship in both Germany and the USA and has a love for the food from both cultures.

Mareile was nice enough to share her families recipe for potato salad with me.  She told me the recipe comes from her Mom’s grandma… which means it’s 4 generations old! 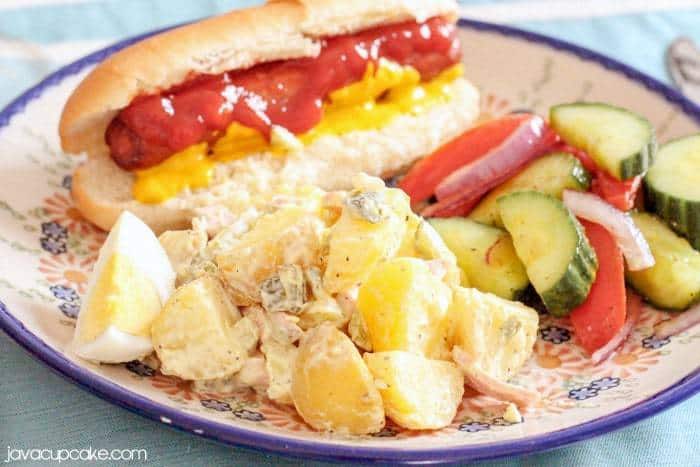 Let’s talk about a few of the ingredients…

First, the potatoes.  The key to this potato salad is to use a firm, yellow potato and to generously season it with salt while it cooks.  I know a third cup of salt seems like a lot to cook with, but trust me you’ll never boil potatoes without it ever again.  The salt brings and adds so much flavor to the potatoes that you’ll want to eat them by the spoonful as soon as they get out of the boiling water.  Also, make sure not to over cook the potatoes.  You want them soft, yet firm still.  We don’t want a mashed potato salad here.

Fleischwurst.  You may be wondering what the heck it is.  Basically, it’s the German version of bologna.  It’s a mild pork sausage that you can easily buy at any deli in Germany.  If you’re making this salad in the USA, you could sub your favorite bologna, mild sausage or even bacon.  There’s no wrong choice here. 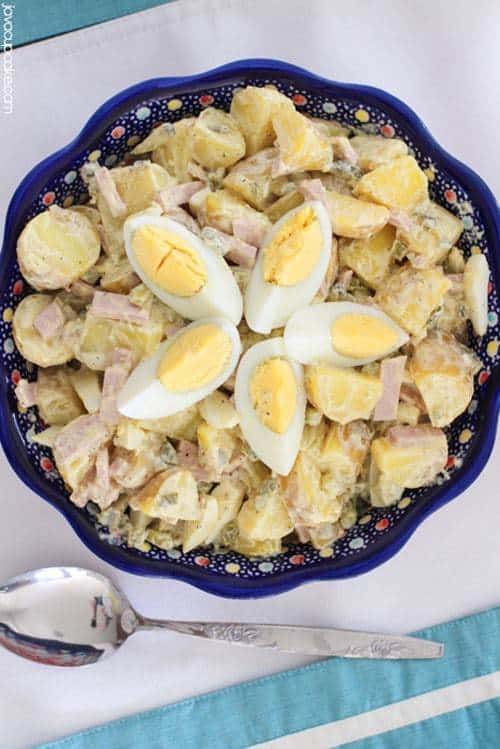 Since there’s no mayo in this salad dressing, Schmand is used to tie it all together.  Schmand is basically German sour cream and any sour cream, greek yogurt or white creamy sauce could be subbed. Just don’t use mayo. You don’t need much of it in this recipe, so I suggest starting with a couple tablespoons and going from there.

I shared this recipe with my neighbor who is also German and she loved it, ate the entire bowl I gave her to sample then asked for the recipe.  I’d say that’s a winning recipe!

I have a German Potato salad my grandmother made that is similar, but there are a few changes. Potato salad is wonderful anytime in my book.

I'll give this one a try!

I love recipes that have been passed down. It means they are good :)

Swabian and Bavarian potato salad are two of my absolute favorites!