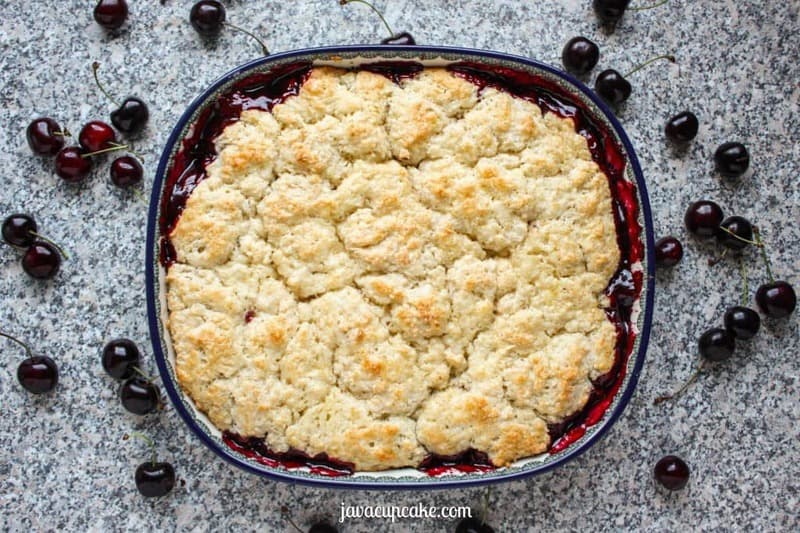 Do you know the difference between a cobbler and a crisp?

Before I made this cobbler, I didn’t.

As I was researching recipes and flavor combinations for things to bake with fresh cherries, I came across the blog Cooking Stoned that explained the difference.

A cobbler is a dense, thick dish with fruit on the bottom and a biscuit like crust on top.  A crisp has the same fruit filling, but on top it has a oat or nut topping and isn’t quite as dense.  Either way – you can’t really go wrong, it’s just a preference.

Personally, I prefer a cobbler (hence the reason why I’m making this Cherry Cobbler) because of the biscuit like crust on top. I LOVE that part. 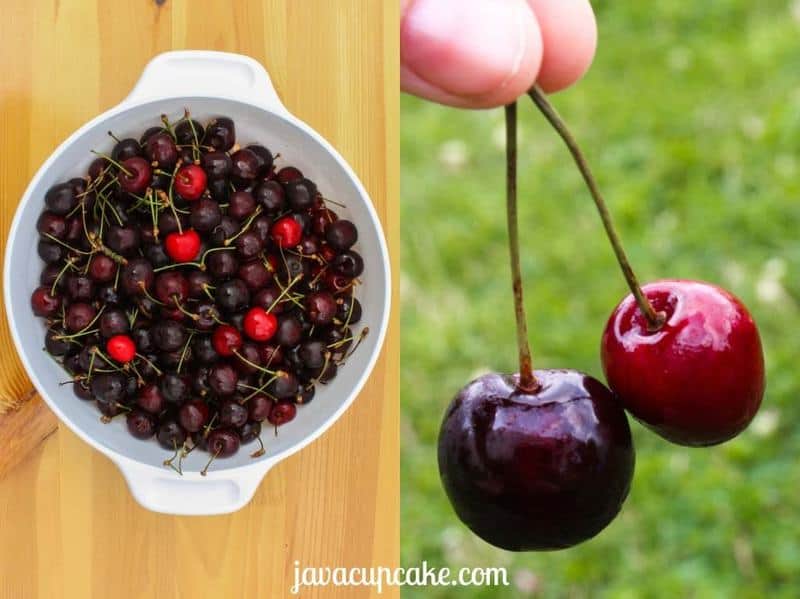 It’s cherry season in Bavaria and my favorite little fruit stand has them by the kilogram.  So yesterday, my hubby and I stopped and picked up about 2 1/2 kilgograms worth of cherries.  I think we ate at least 1/2 a kg before we got home.

There is NOTHING better than fresh picked fruit.  I mean – remember all those strawberries I picked a couple weeks ago and all that strawberry freezer jam I made?  Seriously.  I love living in Germany where the fresh fruit is a plenty! 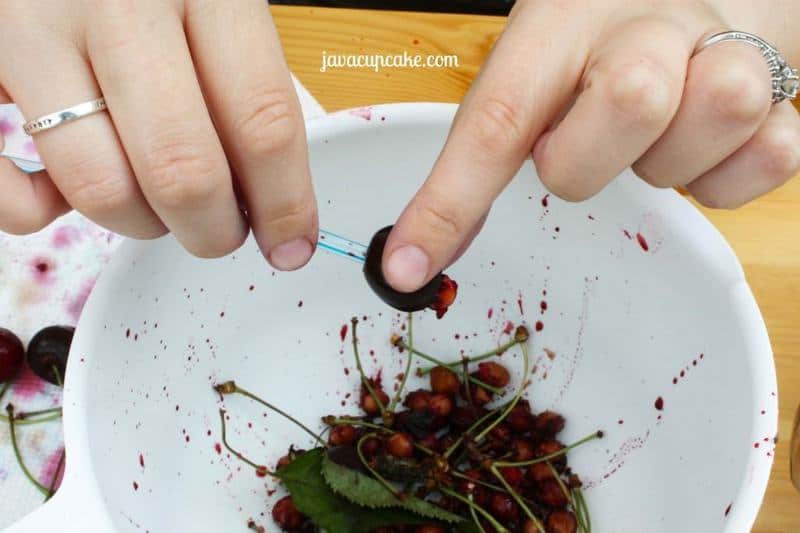 Before we can start putting the cobbler together though, we have to pit the cherries.  You could go out and buy a cherry-pitter, but it’s just as easy to use something like a straw or screwdriver to push the pit through the cherry.  It’s really easy.  Messy, but easy!

Once the fruit is pitted and a few have gone into the belly of your baby… it’s time to make the filling! 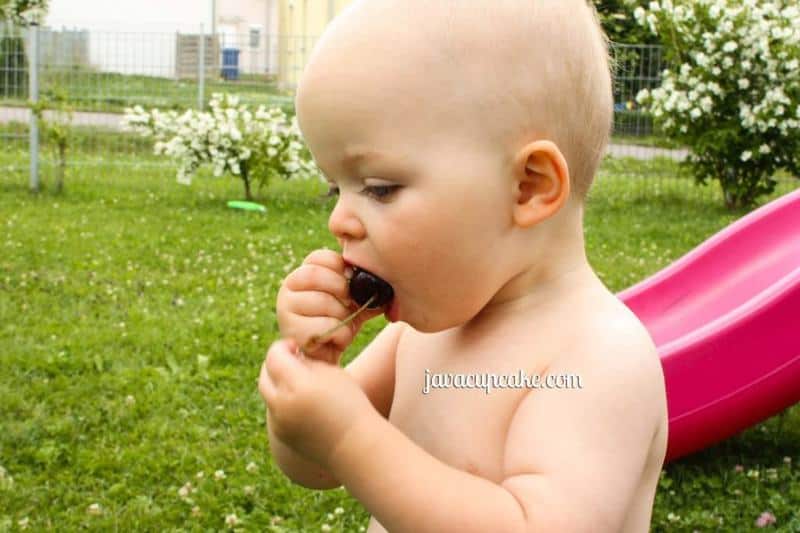 Since I’m in Germany, I had to use Kirsch to sweeten and flavor the filling for the cobbler.  Kirsch is a cherry liquor, often called Kirschwasser and clear in color, which is made from the fruit and stones (pits) of the cherries.  It’s so good.  Typically in Germany, kirsch is used in cakes and pastries and always in Black Forest Cake.  A friend of mine gave me a bottle and I’ve been dying to use it.  Today was the perfect opportunity! 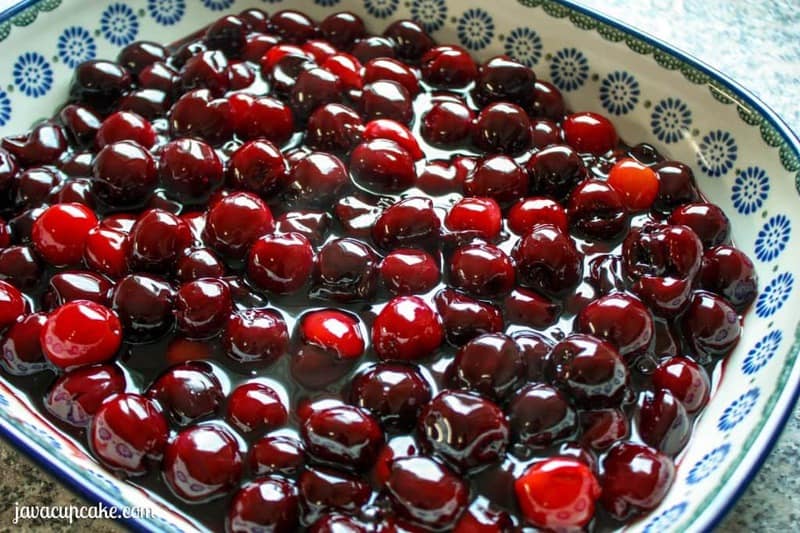 Don’t worry though, if you don’t have access to kirsch, any cherry liquor or berry liquor would work in it’s place.   If you don’t want any alcohol… you could use water.  But the flavor will definitely be lacking. 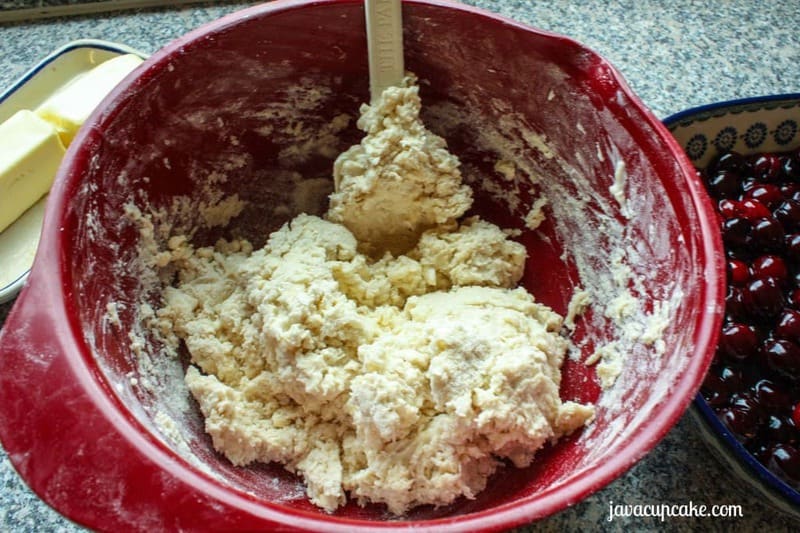 The topping is a basic biscuit dough, but instead of using all milk or cream, I used yogurt then topped the batter with an egg wash and a sprinkling of raw sugar to add a bit of a crunch.  Oh… my.  DIVINE! 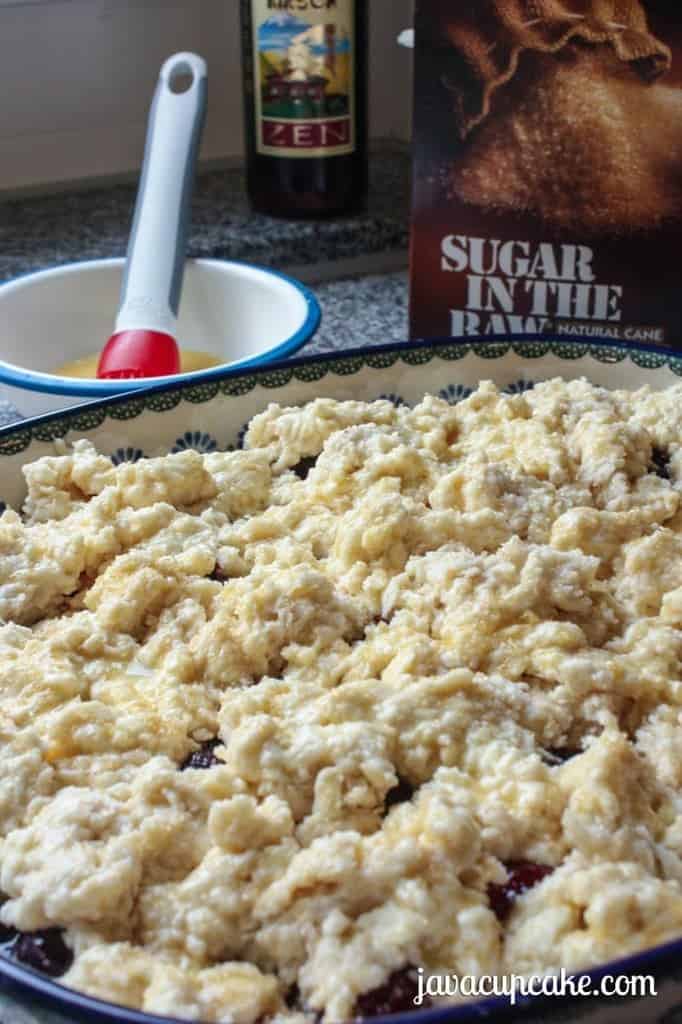 You bake the cobbler until the top is golden brown and the cherries are bubbly. I’m pretty sure with the first bite of this cobbler… I died and went to HEAVEN! Cherry Heaven! 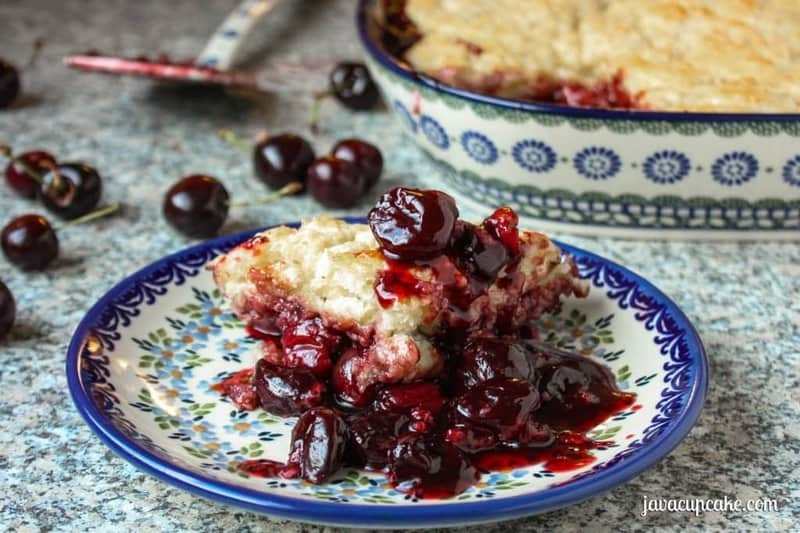 If you get a chance to either pick your own cherries or buy them… I URGE YOU to make this!!!  It’s A MUST!

Here are a few items that could make putting the cobbler together much easier!

Note: If you can’t find Kirschwasser – you could use the juice from a jar of cherries soaked in the kirsch!

What if you don't have limes: Would you use lime juice or replace with lemons?

Well guess we won’t be having the cherry pie….NOPE it’s going to be SHERBERT that’s for sure. have had the cherries in the freezer from last year’s crop and they need to go HERE! thanks for sharing.

Mmm...This is so pretty! I'd eat that cobbler off the top...and then maybe eat the fruit. :)