With Valentine’s Day just around the corner, I thought I’d do a round up of some of the love themed cupcakes I’ve made that would be perfect for your Valentine’s Day party!

These cupcakes could be made with any flavor combination, colors, sprinkles, liners!  The possibilities are enedless!

These are my “Love Cupcakes“.  I used a chocolate cupcake, filled it with a pink creme and dipped the top in chocolate ganache.  I then used the same pink filling to pipe words and decor on the cupcakes.  Of course, the pink, white, red non parrells to garnish. Any combination of words, symbols or colors could be used for these cupcakes.  “Be Mine” “Valentine” Anything works!

I made these cupcakes the first year I started baking cupcakes seriously.  The one on the right is a White Butter Cupcake filled with Strawberry and topped with a strawberry buttercream.  The rest are chocolate topped with buttercream, but decorated super cute with sprinkles lined on the sides.  Love this look! 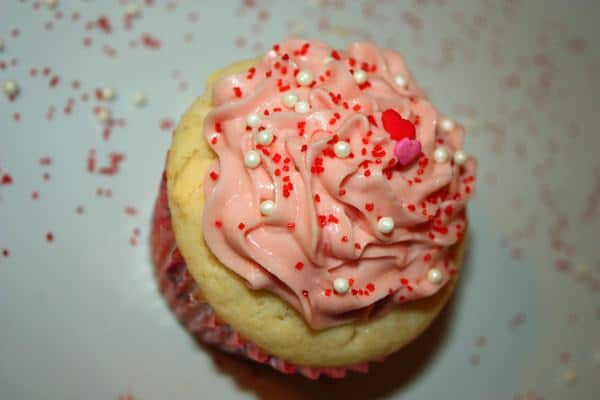 These white chocolate cupcakes are filled with strawberry and topped with a strawberry buttercream.  They are decorated in a pink Valentine’s Day liner and topped with white sugar balls, red sugar crystals and two heart candies.  All of these were found at the craft store and the grocery store.

I find the best time to get decorations for holidays or seasons is the months and weeks before.  I used a star tip in a piping bag to frost these.  You could really use any flavor for this kind of cupcake too and still decorate the same way. 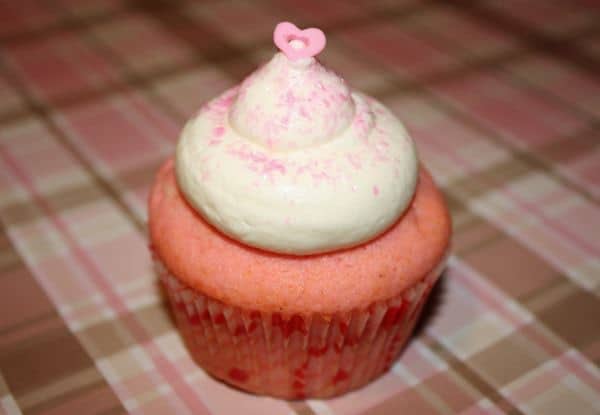 These next cupcakes are a Pink Velvet Cupcake topped with a Vanilla bean Buttercream.  I love these because of how simple they are.  I sometimes like to go overboard with the decorations, but then I realize that sometimes, a simple design is so classy… and that’s just what this cupcake is.

It’s lined in transparent liner with pink and red hearts so you can really see the pink cupcake.

I used a large round tip and a piping back to pipe the frosting.  To get this look with the frosting, you place the tip in the center of the cupcake and squeeze until a large dollop comes big enough to cover the cupcake, only lifting the tip slightly.  As soon as it’s your desired size, life the tip and squeeze a small second dollop.  Stop squeezing and pull quickly straight up to create the cute little swirl on top.

I topped this cupcake with pink cake sparkles by Wilton and one pink heart.  The pink heart came from the craft store’s seasonal cupcake section. 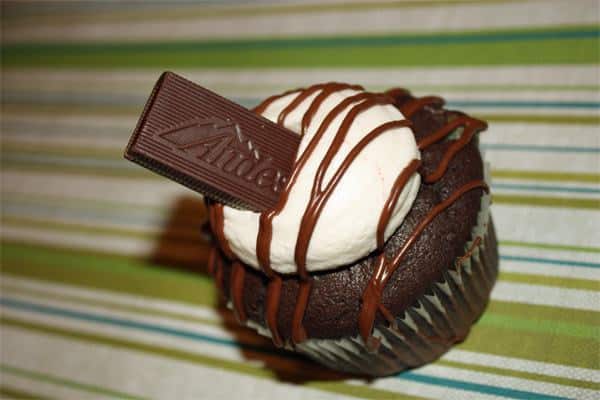 Chocolate mint cupcake filled with mint and chocolate chips topped with mint buttercream, mint chocolate and an Andes mint.  The chocolate mint lovers dream.  Now, these aren’t your typical Valentine’s Day cupcakes… they aren’t covered in hearts and pink and are all mushy lovey dovey… which to be honest, are PERFECT for the man in your life!  He will appreciate the lack of mush in these cupcakes when he takes a bite into them.

These are made with a white liner so that you can see the chocolate cake.  I used a large round tip for piping the frosting and then drizzled melted chocolate across the top.

To drizzle the chocolate, I melted the chips in the microwave (30 seconds, then in 10 additional second increments until melted, stirring) then poured it into a sandwich ziploc bag.  I cut the corner of the bag and then squeezed the chocolate out over the cupcakes.

Topping these was an easy choice because everyone likes Andes mints!

I even made a mini version of these cupcakes, topping only with a sliver of an Andes mint.  Perfect for little fingers!

And for some extra fun… here are a few cupcakes I found browsing online that I thought were decorated so perfectly for Valentine’s Day! Enjoy! 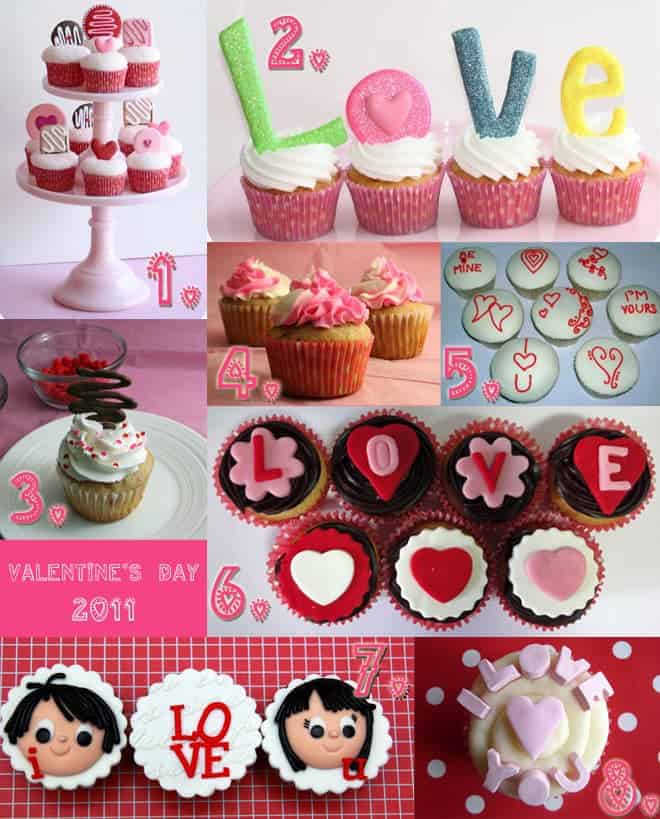 Appropriate-themed store-bought invites would certainly have cupcakes or pink princesses as the layout.

Lots of fun ideas! Daughter is going to make cupcakes this year and decorate them to take to school and pass out to all her "true loves" I will be sure to share this post with her.