JavaCupcake Note: This is a guest post by Amanda Shrum of Eugene, OR. She visited this cupcake shop and had a strong opinion of their cupcakes and her experience there. It does not reflect the views of JavaCupcake or Betsy Eves. I have never been to The Divine Cupcake and therefor can not comment on their cupcakes. Thank you to Amanda for sharing her experience with us! 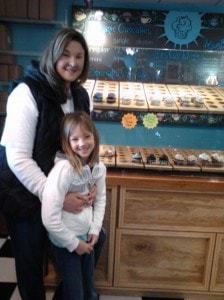 This weekend we were throwing a baby-shower for a dear friend and I was in charge of the cake. Instead of ordering the stereo-typical grocery store cake—or cake from Costco, I decided I would order cupcakes from The Divine Cupcake. (The DC specializes in Organic and Vegan cupcakes.)

The Divine Cupcake opened nearly one year ago (March 2010) and is located in a less appealing side of town. In fact you would drive right by it, if you didn’t know it was already there. They are on a one-way street with only one entrance into the very small parking lot. (Parking max is approximately 8 spots. Very small spots. It’s very difficult to navigate in and out of the lot.) The location is one of the reasons I’ve not been there.

When inside it’s cute, quaint, and provides plenty of comfortable seating with couches and lounge chairs. The interior definitely takes away from the neighborhood. Farther in, they have different cupcake themed items for purchase: jewelry, clothing, nick-knacks, etc. (Shout out to Bella Cupcake Couture!! I saw your beautiful wrappers on display!) Behind that is their displayed cupcakes and coffee bar.

For the shower I knew I only would need a dozen cupcakes, so I called ahead just in case. I’m glad I did. 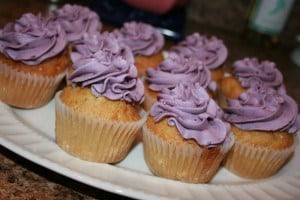 My daughter and I arrived at 11 a.m. (they open at 7 a.m. on Saturday’s). I was disappointed at the lack of cupcakes available: flavors and amount. There was maybe a dozen available?! The cupcakes were on the smaller size—even for a full size cupcake.

My dozen “Bodacious Blueberry” (seasonal) cupcakes were boxed up and ready to go. My daughter begged to pick out her own. It took her awhile, but she settled on the red velvet. $30.00 is what I paid for a 13 cupcakes.

My daughter immediately wanted to go home and try her special treat—and so did I. I was SHOCKED that it was so dry and tasteless. The frosting was hard and crusty….very very sweet too. Almost too sweet it overpowered the cake. Not impressed. Now that I think about it, I wonder if it was because they were not inside of a case and sitting under bright florescent track lighting?! I was worried about the “cakes” I bought for the party. 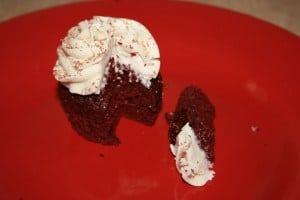 At the party, not one person finished the cupcake. Nobody even said, “Yum, these are good. Where did you get them,” as I was hoping. The texture and taste was the same as the red velvet: dry, crusty, and the frosting was too sweet. As a matter of fact, it didn’t taste anything like blueberry. I was very disappointed!

I will not be back.

Oh—P.S., they should really reconsider hiring new staff. The two girls behind the counter could have cared less that I was there.

Michelle- Thanks for the suggestion of contacting an owner. I would recommend anyone do this for any business if their experience is bad, otherwise how can anyone improve?

Jami-I'm very sorry you had such poor experiences. It's certainly not the norm... our cupcakes are well loved by most people! We have had issues with the heat & a/c drying out the cupcakes, and have a new case on order that will enclose them. This is why you only see a limited number of cupcakes for each flavor out at a time. We have tons in the kitchen, but only put 4 per flavor out at a time so the barista can restock as they sell. They always tell people there are more cupcakes available, and we have multiple flavors available each day to choose from. If we had known you were unhappy with the cupcakes we would have certainly refunded you and will do so now if you send me your address ([email protected]). We take feedback very seriously. I think if I handed you a dozen cupcakes from the kitchen that hadn't been on display you'd be happy...so I hope you will give us the opportunity to show you why other people love our cupcakes! Thanks again for the feedback.

I have actually been there a few times. The first time my daughter and I shared 2 cupcakes and we found the same thing. Dry cupcake and hard frosting. We sat there arguing with eachother about who was going to throw them away becasue we were so embarrassed that we didn't like them. I decided to give them another try and once again they looked the same in the case so I just bought my 6 year old one and he ate it but said it was tough. I think he meant dry. I decided to try it a third and last time and this time I bought cupcakes to bring home for other family members to try just to make sure that I wasn't the only one that felt that way. It was a waste of almost $30. I drive past there at least once every single day and there never are cars there and also when I have gone in they never seem to have a selection at all. I have to agree with Amanda. I just never have said anything because I thought I was the only one that felt that way.

That does not sound like an experience where I would want to give them another try. I think I would want to contact the owner and let them know how my experience was and see how they dealt with it. I would not expect much but still would want to be sure they knew they wasted my time and money and disappointed a whole group of people, where as they could have, with a few changes, had a bunch of great publicity instead.

Hope you still had an awesome time at the baby shower :)