JavaCupcake note: This is a guest post from Cupcake Bakeshop by Chockylit. Check out all her amazing blog posts, cupcakes, and her super smart tips and tricks! You can find her original post here.

After reading through the list of blogs that Cupcakes Take the Cake had posted on their blog, I came across the Cupcake Bakeshop.  I have no idea why I had never read this blog before, but it’s simply amazing.  Their most recent post discusses the importance of taking your time and really paying attention to the care you take when baking butter based cupcakes.  Over the course of the last year I figured out all of these steps, but after many many many trials and errors and not so great cupcakes.  I wish I would have seen this post sooner!  These tips are really worth reading and following… they really do make the best cupcakes! 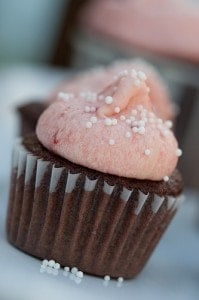 There is nothing terribly exciting or novel about this recipe. It’s my standard chocolate cupcake recipe with strawberry frosting. Boring, no? Well, what I intend to do with this post is to articulate all those little tips & tricks that I know from experience/reading, but never include in a condensed recipe. Some of this is covered in my “basics & troubleshooting” section, but I thought it would be of use to describe these tips & tricks in the narrative of a recipe.

It all started a couple of weeks ago when I wrote out the recipe for my chocolate cupcakes. This is what I want to do if I plan to be very careful and not miss anything. I find its easier to follow and I can check off things as I add them. Then I had the idea to write down the little things I was doing that normally don’t end up in a recipe and explanations for certain aspects of the recipe. Hence the idea was born. So, no formal looking recipe in this post. Just a story…
Beat 2 sticks of butter until soft.

First off – the butter. Every recipe says it, but do we always pay attention? ROOM TEMPERATURE. I really can’t stress enough just how important this step is. I have been disappointed before… About to start baking only to remember that I forgot to take out the butter hours earlier. But really – the best thing to do? Wait it out. An alternative? Beat the hell out of the butter all by itself, scraping down a few times in between beatings. Why? If the butter isn’t soft it won’t get all nicely cut up by the sugar and distributed evenly in the batter. You might just end up with little pools of it melting in your end result. I have had it happen. But whatever you do, don’t microwave the butter. It will just melt and melted butter is useless to you.
Add 2-1/2 cups of sugar and beat until light and fluffy.

Most butter-based recipes say this as well. Beat until light and fluffy. Beat for 3 minutes. Etc. But do you always? Why 3 minutes? Why not 2 or 4? What is light and fluffy? Bottom line? You want to beat that butter well. You want it cut up into tiny, tiny pieces by the grainy sugar so it doesn’t end up into little pools compromising the structure of your wonderful cupcakes. So, beat away! Turn on your mixer and have a glass of wine! Scrape down the bowl and beat some more. (Sometimes mixers leave a thin layer of butter untouched… once that gets folder into your batter you could be in trouble!)
Add 4 large eggs, one at a time, beating well between each.

Similarly, you want the eggs incorporated very well. Basically when you are baking things like cupcakes, you DON’T want to beat the batter once the flour is in (it will toughen them up) but you DO want to beat the ingredients so they are well incorporated. So, beat the butter, sugar, and eggs as much as you can (without going overboard). Now is the time for beating.
Whisk together 1-3/4 cup flour, 1 tsp baking powder, 1/2 tsp baking soda, 1/4 tsp salt, and 1 cup unsweetened cocoa powder.

This part is easy! Many recipes mention sifting, but sifting is a pain. I have never noticed a difference with whisking and whisking is easier to do. So, I whisk. The goal is to just get everything mixed together and any lumps removed. As an aside, I use these restaurant style containers to store dry goods and its very convenient for scooping stuff out without making a mess. And I know I should weigh the dry ingredients, but there is something inherent in me that requires I go only SO far when it comes to baking.

Measure out 1 cup of whole milk and 2 teaspoons vanilla.

Alternate adding the dry ingredients and wet ingredients mixing to incorporate between batches.

So what is with this step? It’s always a little complicated to write down. Some recipes are very specific about adding 1/3 dry ingredients, mixing, adding 1/2 wet ingredients, mixing, 1/3 dry ingredients, and so on. Is there something magical about these proportions? Doubtful. What you want to avoid is dumping everything in and having to beat and beat to get it mixed up, because word on the street (ok, I never tried this…) is that doing so will make your cupcakes tough. The idea being the glutens get over beaten. Whether this is exaggerated, I do not know, but with many of the other steps described above, I have screwed up and have seen the unfortunate results. So I am leaning towards this being a good thing to follow. One day I should over-beat some and see what happens.
Scoop batter into cupcake papers 1/2 full.

This chocolate cupcake recipe is a result of my experimentation in trying to get the cupcake to be as delicate as possible and as chocolately as possible without being a complete disaster. That said, you need to be careful. Don’t, I repeat, DON’T overfill the papers. And DO make sure your oven is at the temperature it says it is. If you are super concerned, add another 1/4 cup of flour to the recipe. That will help reduce some of the risk. That said, I love the way the cupcakes come out and while I do sometimes overfill and get some overflow, it doesn’t stop me from eating them and sharing them.
Bake for approximately 22-25 minutes at 350F or until a cake tester comes out clean.

This step sounds easy. It isn’t. It’s where I tend to screw up when I do. For example, I have a working theory that cool spots in the oven cause some of my cupcakes to overflow. This is because the overflowing cupcakes tend to be in one area. I especially see that if I am baking a lot of cupcakes. The ones on the lower rack tend to overflow. So often I will do one of two things, preheat the oven to 375F and drop it to down to 350 once I get them in there. Or I will preheat to 350F but run the convection fan during preheat and for the first 10 minutes of baking. The problem with this (I did it a couple of weeks ago) is if you leave the convection fan on the whole time, the cupcakes will over bake and be crumbly and dry. Normally when you use convection you should drop the temperature down 25 degrees. I also think convection is better for things like cookies or chicken where you want it to get crispy, but doesn’t work so well with cupcakes. It seems like a good way to get rid of unevenness in the oven…. Jury is still out.

I recommend not disturbing the cupcakes for the first 10-12 minutes. Then I will often rotate the pans also because of the unevenness mentioned above. I start testing at around 22 minutes for this recipe. I think post people use toothpicks as opposed to official “cake testers” but I use an ice pick as that’s what I have on hand. Anything pointy you can stick in there. If you under-bake these cupcakes they will be gummy. If you over-bake them they will be dry and crumbly. So start testing around 22, test every couple of minutes, and try your best to get it right.

Whew, with any luck you have some gorgeous cupcakes cooling on a wire rack. Now let’s get cracking on the frosting.
Beat 2 sticks of butter until soft.

Pretty much the same thing goes with frosting. It’s way better if your butter comes naturally to room temperature before making frosting. I have tried many shortcuts and they work ok enough, but in my opinion you won’t get as smooth as a frosting otherwise.
Sift in 3-4 cups of powdered sugar and beat until smooth.

Again, I don’t like sifting, but if I must (and with frosting, you must or it will be lumpy) I will use one of these metal sieves and a spoon. By far the easiest method I have come across. I always start with a good amount of powdered sugar with room for adding more later.
Add 1/4 cup of strawberry puree and beat until combined.

Not much to this except your yellowish frosting turns a pretty pink. Feel free to add a teaspoon of vanilla at this step if you want.

Add more powdered sugar until you get the consistency you like.

When you add a liquid to buttercream it’s hard to get it to a nice thick consistency that is good for photo shoots. You can keep adding powdered sugar, but it won’t help. So minimize the amount of liquid. I went beyond 1/4 cup in one try of this recipe and it was way too much. I never recovered the frosting. It was usable, but runny. If you are anxious about this, omit the puree and just add chopped strawberries. It won’t be as strong a strawberry flavor, but less risk is involved.

I also made a cream cheese version of the strawberry frosting. If you want to try that substitute 1 8-ounce package of philly cream cheese with 1 of the sticks of butter and don’t add much puree. Stick more to using chopped strawberries as the cream cheese will already make the frosting softer than buttercream.

Decorate as usual by either piping the frosting on, scooping it on, whatever works for you. If you pipe, use a tip with a big opening, like 1/2 inch or so. the most useful article on cakes - EVER you made my day

Wonderful! Thanks for that feedback!

This was sooooo helpful. I do tend to cut a few corners here and there and am usually disappointed with the results. From now on my butter will be room temp!

this is a fantastic site. You explain why things work and the reason you have to follow a recipe exactly. really great! I have a question tho, I really would like to know what size papers so most bakers use? Some of my cupcakes come out so small, I am ashamed of them. I would like to start a cupcake shop, but I want to have the right size for my customers. Also I was wondering if you can use one or two basic recipes, say for Chocolate and White and add the extra flavors and other additions? Thanks

Most bakers use a "standard size" baking cup. If you fill them 1/2-3/4 full, depending on the batter you should get a full cupcake!

And sure, you could use just a basic chocolate and white and add flavoring to them.... or you can experiment with the types of chocolate, vanilla, and such you put in them to change taste, color, texture, etc!

The possibilities are endless!!!