The Caravan of Compassion began as a desire to do more, be more, and help more people.  It ended up being an event that filled my heart and changed my life.

Earlier this summer as I watched on TV the million refugees fleeing the middle east in hopes of finding freedom and safety in Germany, my heart immediately knew I had to do something to help.   I put a call out on my blog for donations from friends near and far and my family plus my friend Lizzie and her family delivered those donations to a refugee shelter in Weiden, Germany.   The people I met and the experiences I had at that shelter were life changing.  (You can read about that day here.)  People in my community began to ask me how they could help, what could they do, how could they get involved.  Unfortunately, there was no organised club, group, or department in our military community that was set up to help on a large community level.  So Lizzie and I decided to put a plan in place to bring our military community together to help the refugees and the Caravan of Compassion was born.

On January 23, 2016, 60 Americans and 22 cars packed full of donations made their way to two refugee shelters in the German village of Schwabach.

We gathered together in the parking lot of USAG Bavaria – Grafenwoehr for photos and a brief about what to expect at the two shelters. Lizzie and I had coordinated with several of the refugees we had befriended earlier to visit these shelters and wanted to share a bit with everyone about the shelters before we left.

My heart racing with excitement we were off! I couldn’t wait to share with the other Americans the joy I feel when I give to the refugees who literally have nothing.

The first shelter we stopped at was an all men’s shelter located in a single-court gymnasium.  Upon our arrival, we were greatly happily by smiling faces of the men who lived there.  We were later told that no one had ever been to their shelter to bring donations so they were very excited to see us.

Lizzie and I visited both the men’s and women’s shelter the week prior to determine what their needs were.  We were surprised to find that this men’s shelter had no heat and the blankets were scarce so we asked everyone to gather what they had of those items specifically for this shelter.

The living conditions of this shelter was unimaginable.  Rows of cots lined the gymnasium where the only storage for belongings was under, next to and above their cots.   With at least 40 men living in this shelter, the only bathroom available was a small locker-room style space which was less than to be desired in means of cleanliness.  In order to eat, the men needed to walk 1.5km away to another shelter where 3 meals a day were provided.  Rain, cold or snow… if they wanted to eat they had to go to the other shelter.

After we brought all the donations inside, we handed a blanket to every man living in the shelter.  We also had boxes full of toiletries, clothes, jackets, boots and shoes.   The men went through the items we brought for them, taking only what they needed and making sure their friends had what they needed as well.

We spent about 45 minutes visiting with the men, hearing about their lives and just being with them.  Love, compassion and humanity is something that they rarely have experienced since fleeing their country.

It amazes me the resolve these men have.  They left their families, their jobs, and their homes with no idea of what they would find when they arrived to Germany yet they still have the ability to find joy and love in the moment they are in.

The smiles on their faces… simply priceless.

Although we couldn’t stay longer, we left knowing that at least these men would be warm that night and in the days to come.

The second shelter we visited was a family shelter 1.5km away from the men’s shelter.  This shelter is where the men come to eat.  The family shelter is located in an old school where 4 rooms are used to house 13 families totalling 42 people (20 adults and 22 children).

Unfortunately because of a communication mishap, we were unable to go inside of this shelter so we set up our donations outside.  Luckily the weather had cleared and it was a nice afternoon.

We set up the donations in 4 main areas.  Boys, girls, womens, and mens items.   We also had suitcases, storage tubs and consumable items for them.  On our visit the week prior, LouLou – the refugee who gave us a tour of the building, asked if we could bring suitcases for them, along with shoes and jackets for the children.

LouLou told is that they have nothing to put their things in and often have to move from shelter to shelter, so suitcases and bags were really wanted and needed.  That is LouLou talking to Lizzie in the photo above.

For an hour and a half, the 13 families living in this shelter we able to go through all the things we had brought.  It almost felt like a giant shopping spree for them!  It was amazing to see their faces light up at the sight of diapers for their babies or shoes for their children.

When we arrived, none of the children were wearing proper winter jackets, hats or boots.  By the time we left, we made sure each of them was wearing one. 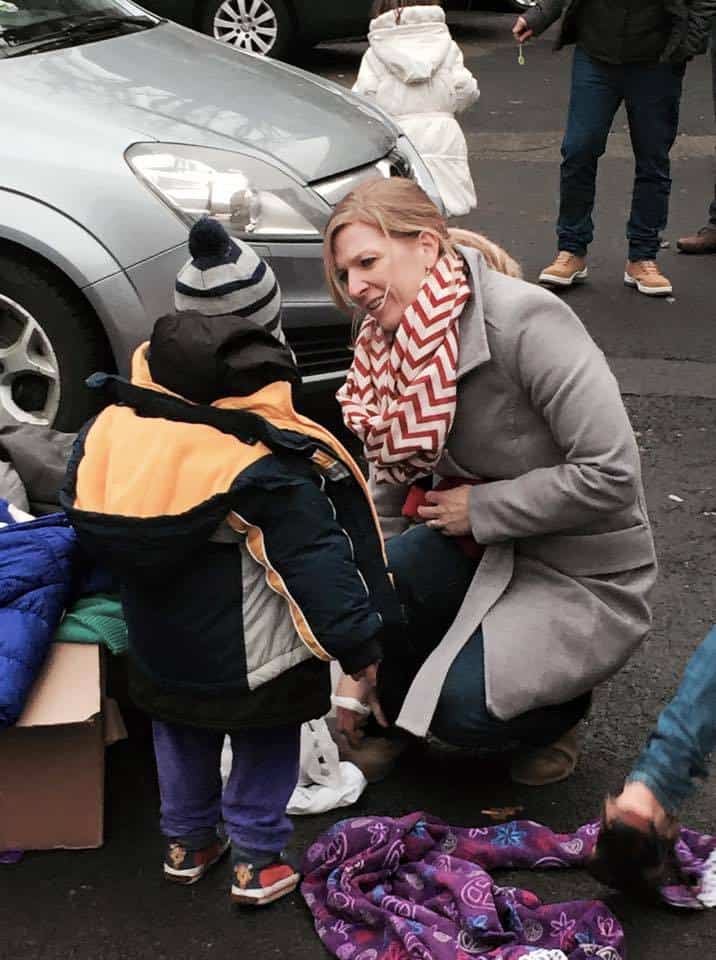 Not only did we bring clothes… we brought toys, bubbles and American-style homemade goodies for them!  The children don’t know what’s is happening in their world… but they do know that a new toy and a cookie is the most amazing thing in the world!

And of course… it wouldn’t be an American event if someone didn’t bring Krispy Kreme!  This woman was handed a glazed donut to try, took one bite then asked for the entire box!

One of my favorite things about this entire experience was that our children, with no language needed, we able to play with their children.  The world of difference between the children didn’t matter.  All they saw was someone else their size, smiles, love and fun.  It was heart warming!

One of the refugees we met through the Weiden shelter agreed to share his story with all of us there.   Hatem, a native of Syria, has been in Germany for 3 months.  He has a wife and 4-year-old daughter who are currently in Syria with her family.  Hatem was a doctor of physical therapy in Syria and Turkey and he hopes to continue that here in Germany in order to bring his wife and daughter here as well.

Hatem actually helped to put together this caravan for us.  It was his connections with other refugees  that we were able to find these two shelters in need.  Hatem proudly answered questions about his life for us and truly gave us an opportunity to get a glimpse into the life of the refugees.

There was one family in particular that I really wanted to help after learning about their needs on our first visit.  They were a young mother and father with a baby just a few months old.  The mother had asked if we could bring a stroller, diapers and jacket for her baby.  This is the mother below in pink.

I went to the recycle center on post and found a stroller in the garbage that had nothing wrong with it, so I grabbed it and brought it to this mother. I also purchased a brand new winter jacket for her little angel.

This is me and that sweet baby just before I put the jacket on her with my friend Hashem (he’s also a refugee but from the Weiden shelter).  I mean, that face… isn’t sure the cutest thing ever?

There were so many moments at this family shetler that will be engrained into my memory forever.

The stories their faces told often spoke louder than any words could.  Some of the refugees could speak English, but often only a smile or a nod of the head was needed to communicate.

This boy was the oldest of several children and on our first visit, his younger brother begged us to bring him a skateboard.  We brought him a skateboard, but see who took it first… his brother.  Some things, even sibling rivalry, are the same across every culture!

Lizzie snapped this selfie with them!  They were so full of laughter and fun! 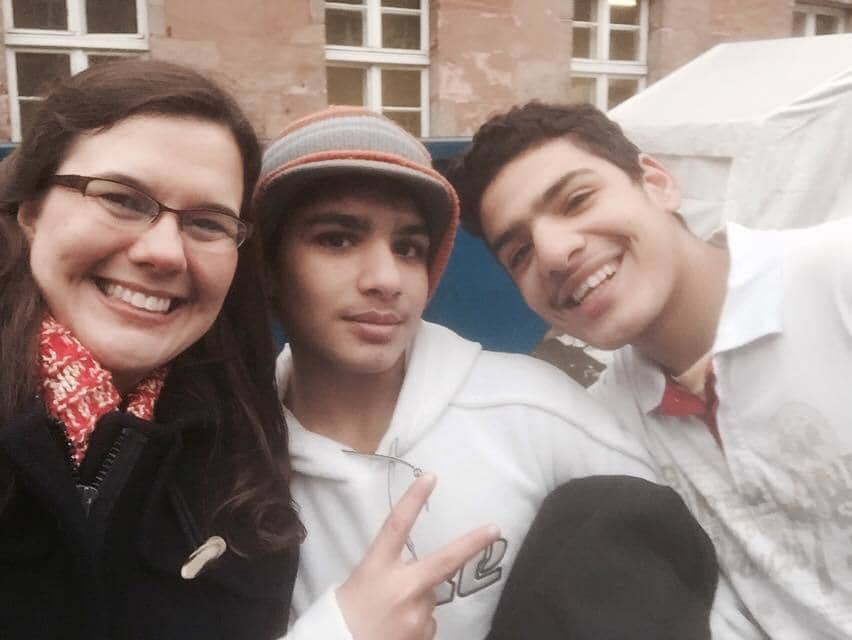 Before our time was over many pictures were taken, friends on Facebook made, hugs given, and promises to remain in eachothers lives made.

Personally, my life will never be the same after this experience.  The connections and relationships I made with these refugees, these people, have changed my heart forever.  Living in the USA we are often times unaware of what is truly happening in the rest of the world.  Partly because we don’t look hard enough to see it, partly because the news doesn’t show us, and partly because of our own ignorance.

I can not claim ignorance anymore.

These refugees, these men who I now call my friends,  have shown me waht it means to be a family, to truly love and care for one another, and to appreciate the life you have in front of you.

All they want is freedom, safety, a home, a family to love and to be loved by, and to provide a life for them.   When it comes down to it, that’s what I want too.  That’s what we all want.

Syrian, Iraqi, American.  We are  all the same.  We are all human.

This is my new family.  My family of refugees who welcomined me into their homes and their hearts.  Hashem, Karar, Moin, Hatem, Wisam and MohammedAli (not pictured).

If you are interested in learning more about how you can help the refugees within the US military commuity in Germany, please email [email protected].

There we so many wonderful moments, so many pictures taken that it’s difficult to narrow down to just a few to feature.  To see all the photos our fantastic photographer Michelle Hires was able to capture from the day, please visit her gallery!

A Mott’s for Tots Play Date