We celebrated Matty’s 3rd birthday with a Minion Birthday Party! It was so much fun to plan and put together that I decided to share some of the details with you! I decided last year that his 3rd birthday would be a Minion theme. So, I started collecting Minion everything and pinning ideas to my Minion Party Pinterest Board. 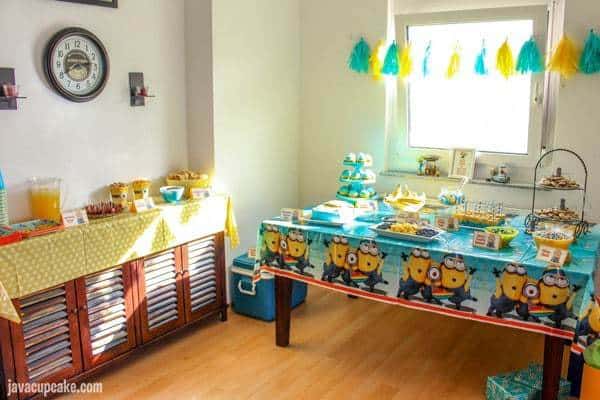 I seriously could have stared at this table all day. I am in love with how it all turned out. I just kinda winged it when setting up, but really love how it all came together. I could have bought a giant inflatable minion from somewhere like Inflatable Gurus as they allow you to customize what you want, but I decided against it this time only for lack of space! 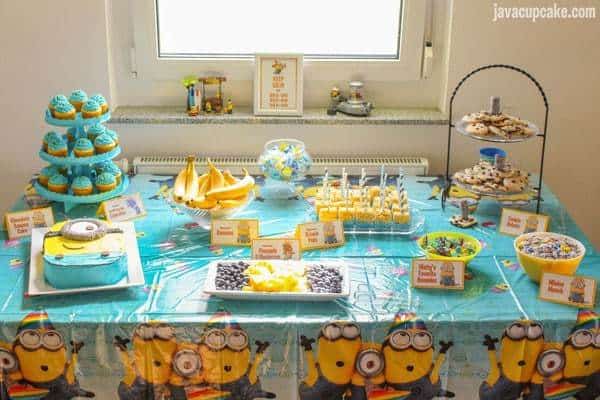 I went home to Seattle in February and stopped at Party City while I was there to pick up a few decorations. I didn’t want all the decorations to be store bought with Minion prints all over them, so I picked out a table cover, balloons plus plates and napkins with minions on them. The rest of the decor was in yellow and blue. 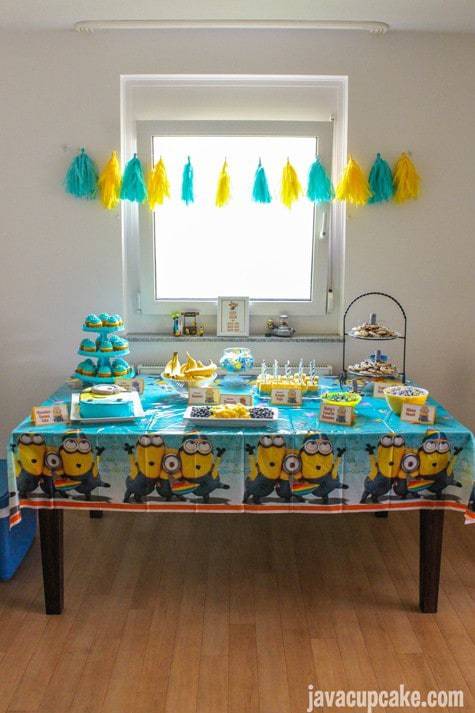 I used yellow, blue white or glass plates and bowls for serving… just the things I already had in my kitchen. They didn’t all match in style, but their colors did, which was good enough for me. 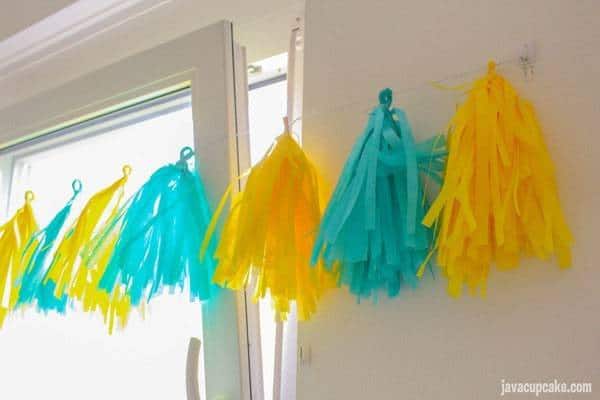 I hand made this yellow & blue tissue paper garland to go over the main table. It brought height to this display and really made a dramatic impact.

For his birthday, Matty got a few Mega Blocks sets of Minions, so we put them together and used them on the display table as well. 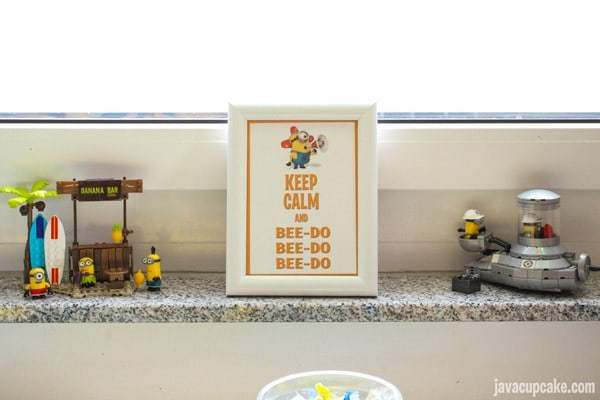 In Photoshop, I made a “Keep Calm and Bee-Do Bee-Do” sign, printed it and put it in a 5x7in frame I already had in my house. After the party, I put it in my sons room as a decoration along with the tassel garland. 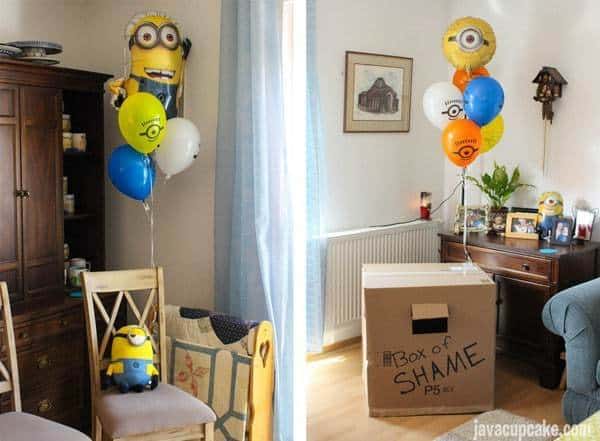 The balloons I bought at party city I had blown up by local balloon artist Balloon Beauty. I loved how they kept the Minion theme going in that party of the room!

The Box of Shame was super easy to make and a big hit with the kids! It’s basically just a cardboard box with one side of the lid flaps taped open, a hole cut out and the words “Box of Shame” in Sharpie. Free and fun! 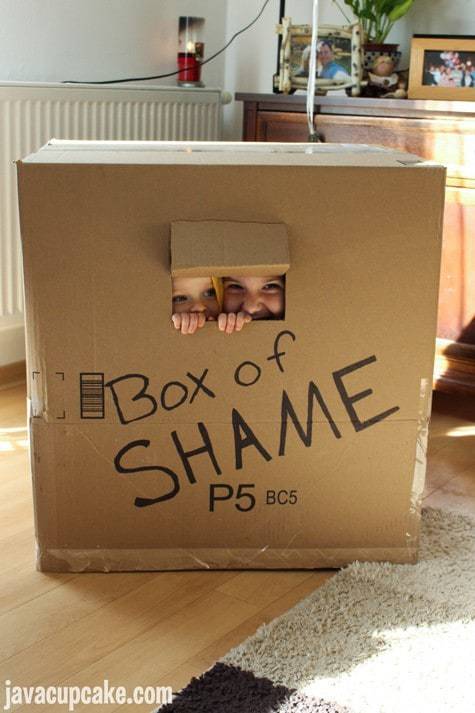 The first big decision I made was that I wanted the party to be in the afternoon so I wouldn’t have to provide a big meal for anyone. Finger foods, snacks and of course the cake and cupcakes would be all the food I would serve. This made things a lot easier the day of because there was less food to prep.

In front of all the food, were these cute table top signs. I printed and cut them out then glued them to yellow card stock to make tent signs. Everyone at the party thought this little detail was pretty cute! I loved how it subtly brought more Minions to the party! Below I’ve included a link to a free printable. It doesn’t have the text, but you can print them to make your own table top signs and write in the food! 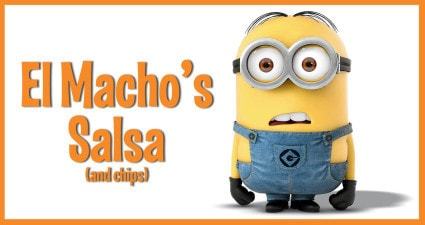 As you can see in the pictures above, I had a mix of finger foods that were very easy to prep and prepare but for the most part were all on the Minion theme. Chips & salsa, pineapple, bananas and blueberries were a big hit. I also found HARIBO Minion gummies, Minion cheese and graham crackers and made Minion Munch (which was simply muddy buddies with yellow and blue M&Ms). Slow cooker meatballs in sauce added a savory element and pineapple juice mixed with 7-up served as the beverage.

And aren’t those Minion buckets adorable? I got them at Party City too and they were great for holding utensils and the Minion crackers! 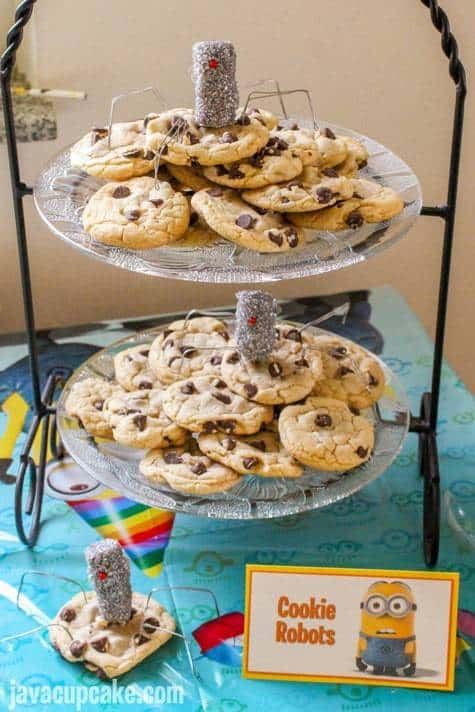 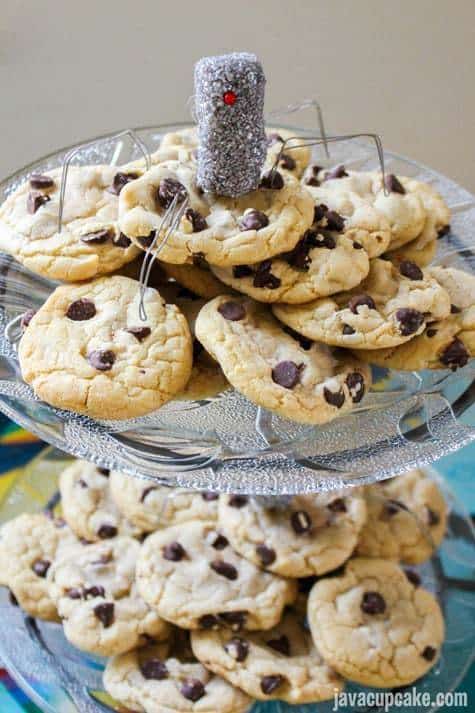 You know, I’m obsessed with cupcakes. I mean… if you’re a reader of JavaCupcake, then you shoud know this already. This year though, I wasn’t sure if I could pull off Minion cupcakes. I do not know anything about working with fondant and my buttercream piping skills are good, but not good enough to make Minions. 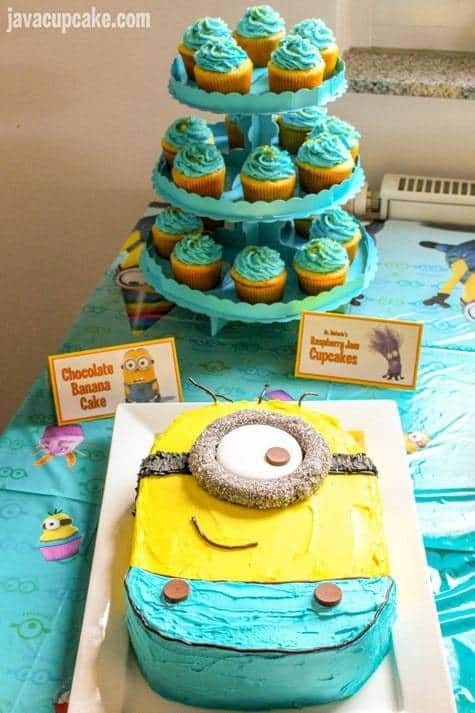 So I decided to make a Minion Cake and blue and yellow cupcakes to go with it. I found the idea for this Minion Cake on Betty Crocker. It’s really so easy to make. Like super easy. But, you know me… I can’t ever do anything simple… so I put the JavaCupcake spin on the cake.

TO MAKE A MINION CAKE 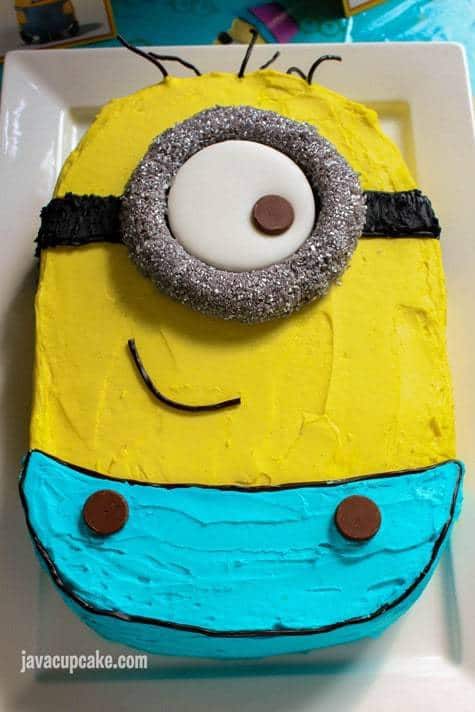 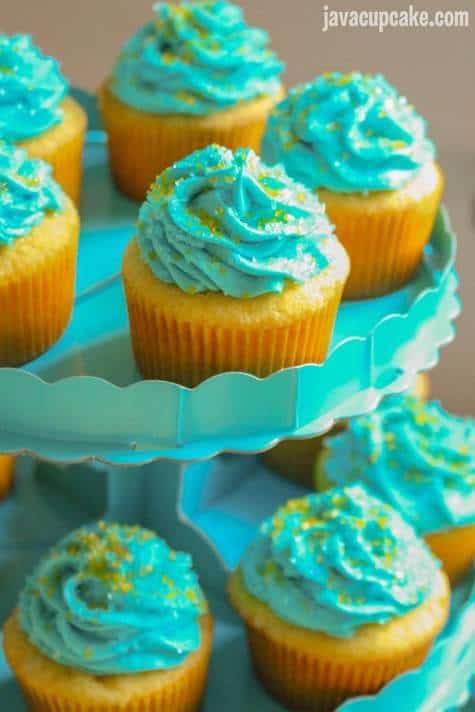 HOW TO MAKE MINION CUPCAKES

Although food is awesome at parties, I did not want the kids to be running around crazy the entire time. So, I planned some fun & games for the kids!

First up was cookie decorating! I set out a big plastic table cover on my floor for easy clean up, prepared sugar cookies & buttercream in advance and set out the supplies for the kids. I showed them a Purple Minion and a Yellow Minion I had made in advance and let the kids at it! They loved this! 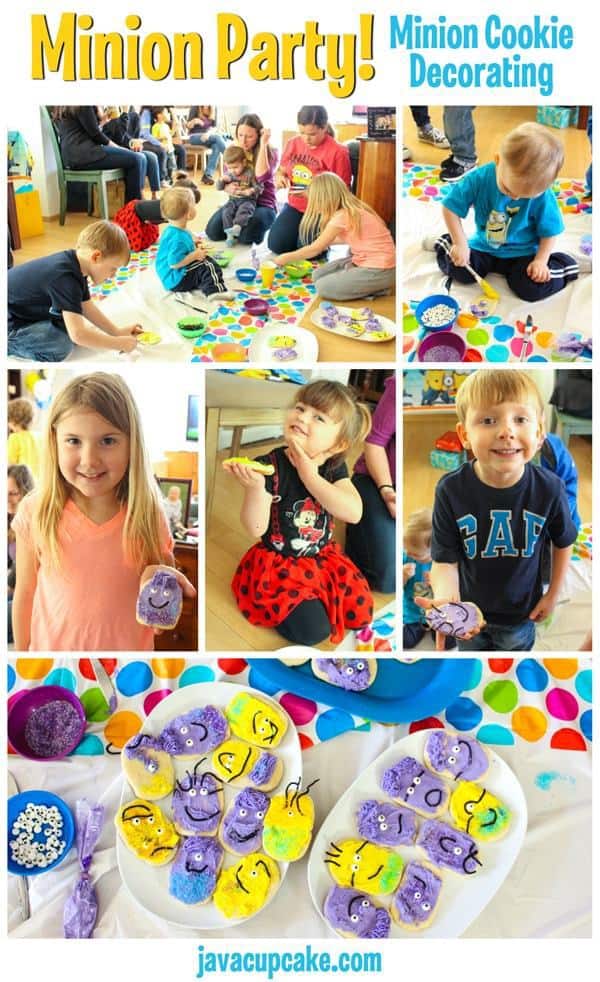 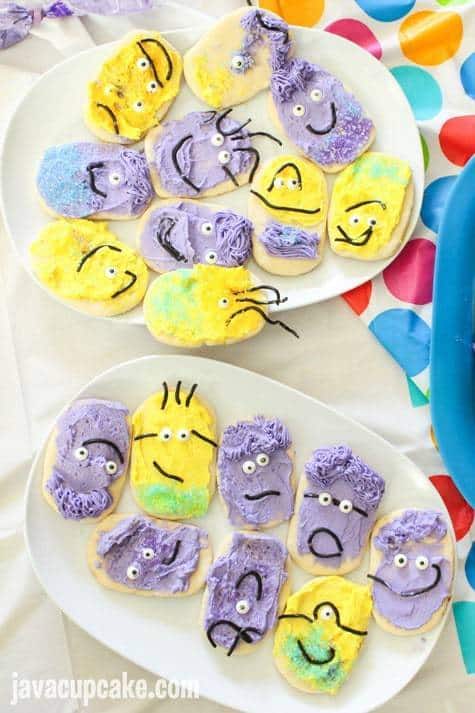 We also played “Pin the Goggles on the Minion!” This game was short and sweet, but the kids liked it! Matty wanted to pin his goggles over and over and over! 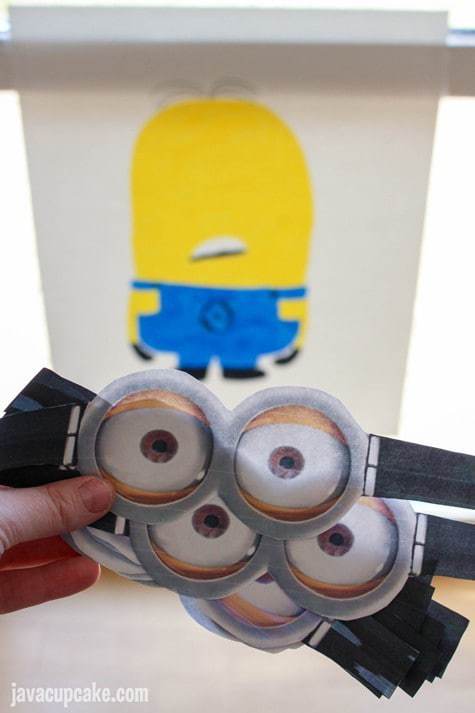 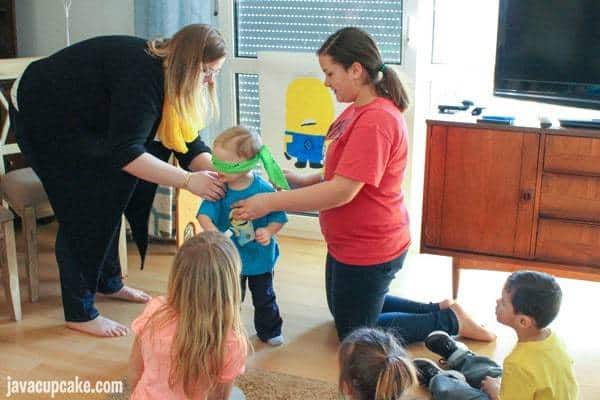 Overall, I was really proud of myself for this party. It was by far the most elaborate party to date that I’ve put together! It was fun, the kids had fun and the parents thought the decor was awesome. My daughter told me 10 times how impressed she was and how much fun she had.

My favorite parts were the Cookie Robots, the Minion Cake and watching the kids have fun decorating Minion cookies! So fun! 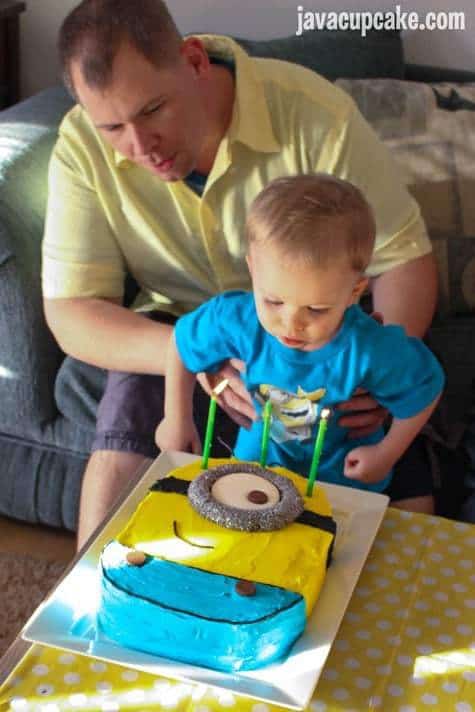 we planned a minion themed bridal shower and this helped soooo much, thanks! :)

Love Love Love this party!!! So much inspiration for my sons 4th birthday coming up! Just a quick question, did you make the rice crispy treats!?? Theyre adorable!

Yes! I added a bit of yellow food dye to the marshmallows before I mixed in the krispy cereal. Then dipped squares into white chocolate and covered in blue sugar crystals. Once dry I inserted a paper straw as the stick! Easy and delish!

OMG I LOVE this idea!!!!! You did such a great job and the attention to details are amazing!!! I'm definitely using some of these ideas for my sons birthday!!!

Hi Shawna! Thanks so much for the feedback! Good luck with your son's birthday party!! Let me know how it turns out, I'd love to see what you put together!

What did the sign say for the fruit? I need a cute name for fruit or veggies.

I didn't really have a cute name.... I just called it Minion Kevin's Blueberries & Pineapple.