On Saturday, I took part in Cupcake Wars!  Well… not THE Cupcake Wars, but a fundraiser in my community for the Cougar Foundation, a non-profit organization that supports the Army unit my husband is in. 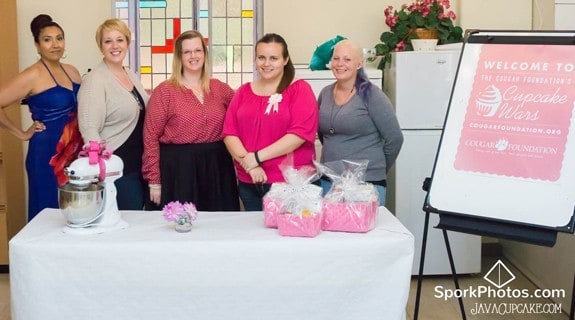 This fundraiser was a friendly competition where five local bakers set out to bake 5 dozen mini cupcakes, create a display and let the community decide who was best.  There were three prizes available, Best Overall, Most Delicious and Best Presentation.   About 100 people attended the two hour event where they bought tickets to taste the cupcakes and vote for their favorites in each category.  All proceeds from the event go into future Cougar Foundation events which directly benefit the soldiers and families of 2nd Squadron, 2nd Cavalry Regiment in Vilseck, Germany. 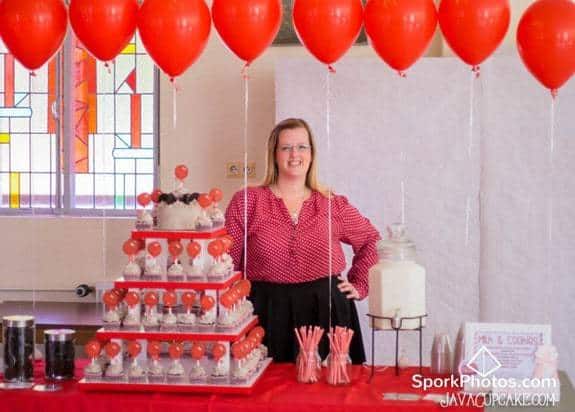 Of course, I don’t know how to do anything mini, so I knew my presentation and cupcakes were going to be GRAND!  With about a month before the event, I began planning my tablescape.  I knew I needed something to display my cupcakes on, so my husband helped me to build a giant cupcake tower!  I’ll have a full DIY instructional post on that project later this week! 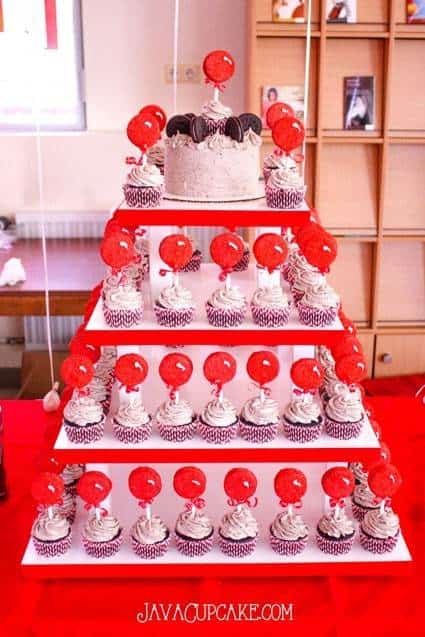 So with the cupcake tower taken care of, I needed to decide on more of the details of the tablescape.  Since the colors of 2/2 CR guideon (flag) are red and white and that’s who this fundraiser was for, I thought those would be the perfect colors to work with!  I contacted my friend Shannon at Sweets & Treats Boutique and she was immediately on board with sponsoring my table by providing all the paper products for my table by providing me with the red and white chevron liners and coordinating straws. 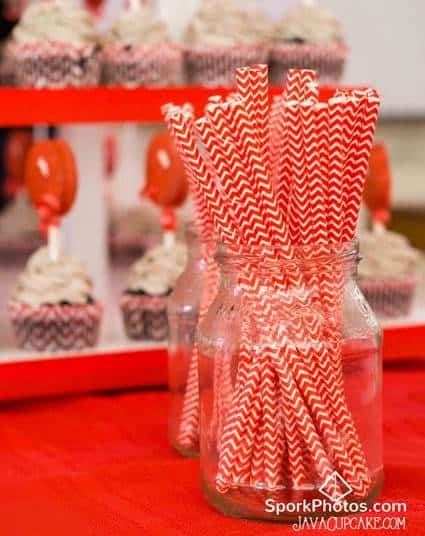 The theme of my table was “Milk & Cookies” so each person I served received a cupcake in a chevron liner along with a cup of milk served with a chevron straw! Aren’t these straws and liners the BEST?

Make sure to visit Sweets & Treats Boutique to get your straws, liners and party supplies for your next event! 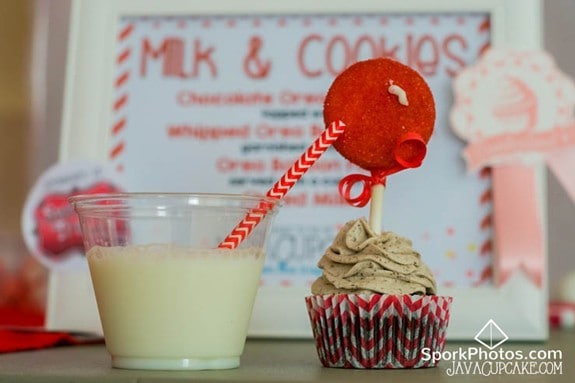 If you’re wondering what that cuteness on top of the cupcake is, I have to be honest and say I can’t take credit for their genius.  I was inspired by other friend (I have so many talented friends, don’t I?) Christi of the baking blog, Love From the Oven and her new book Smart Cookie!  She features a rainbow bouquet of these pops in her book and I thought the red ones would be PERFECT to top my cupcakes! Balloons topping the cupcakes and balloons floating behind my cupcake tower tied the entire table together! 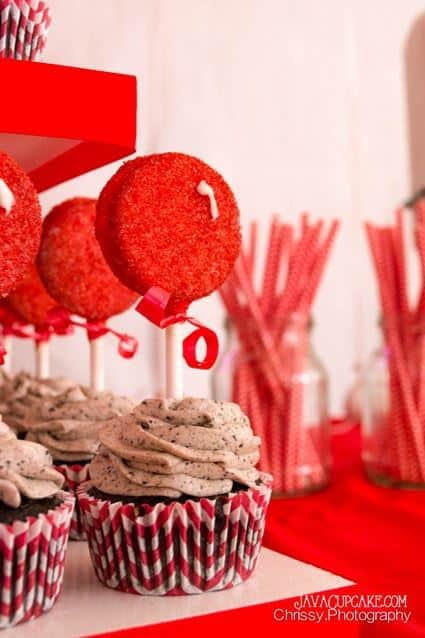 Let’s talk cupcakes for a second.  You may be noticing a theme here… Oreos.  I love these cookies, I mean really, who doesn’t?  Every time I make these cupcakes they are always a crowd pleaser and I knew they’d be a hit with all the kids who came to the fundraiser!

I started with my favorite chocolate cupcake, baked an Oreo in the bottom of the liner then topped it with a whipped Oreo buttercream!  Perfectly moist, not too sweet and so creamy.  It’s the perfect cupcake for an Oreo lover! 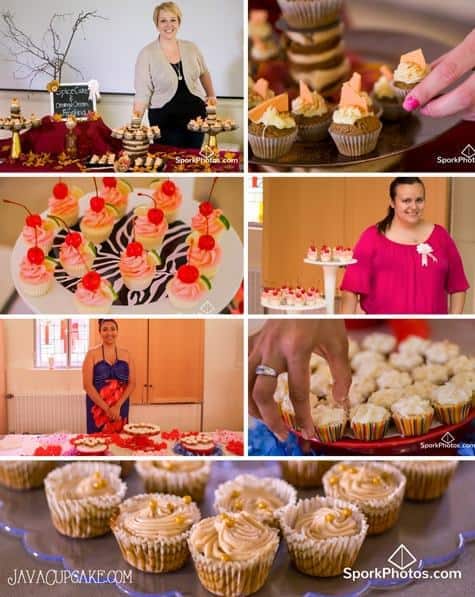 The other bakers competing at Cupcake Wars created some super delicious cupcakes… one of which you might even recognize!

Starting at the top of the above photo we’ve got Tia and her spiced cupcakes with orange buttercream.  You can see she went above and beyond with her Fall themed display!  So cute and her cupcakes were a perfect bite of Fall!  Loved the orange frosting on these cupcakes!

Next is Stacy who made Cherry Limeade Cupcakes.  Her little cuties are perfect versions of a full size cupcake!  I loved how high her frosting swirled.  Now, you may be thinking these look familiar…. well, it’s because I made these same cupcakes back in 2011!  Crazy huh?  :)  I think Stacy did a great job with her version!

Iris brought a Hawaiian treat with coconut macadamia nut cupcakes.  She dressed up her table in a Hawaiian theme.  I wasn’t able to try hers because I’m allergic to nuts, but I heard they were pretty delish!

Finally, Natasha from Frosted Fantasies (she opted not to have her photo taken) made an apple cupcake with a soft, smooth frosting.  A tiny bite of deliciousness perfectly decorated with golden sugar pearls! 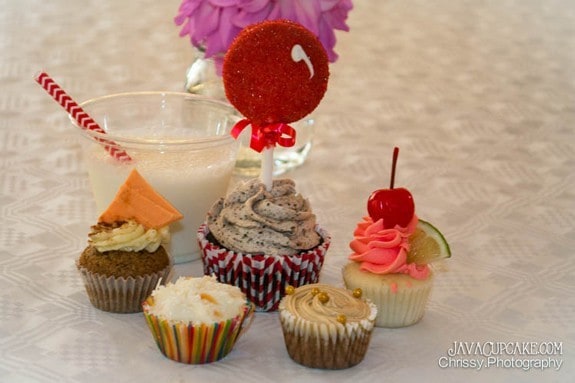 Now, this event wasn’t just a fundraiser… it was WAR!  Cupcake WAR!  And there were prizes to be won!  Best Presentation & Most Delicious were awarded gift baskets full of fun baking items such as aprons, cookbooks, cupcake liners and other supplies.  The Best Overall winner was given a brand new KitchenAid stand mixer! 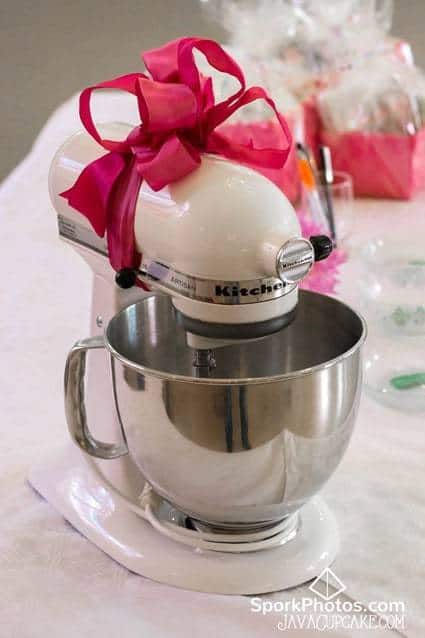 Since there was not a panel of judges for the competition, the winners were to be chosen by those who attended and purchased tickets to Cupcake Wars.   Votes had two options for tickets, buy a $10 tasting ticket which included 1 cupcake from all 5 bakers and 3 votes, 1 for each category or buy a $2 individual ticket for 1 cupcake and 1 vote for any category.  Whoever had the most votes in each category, would win!

This next part, I’ve been grappling with whether or not I should talk about.  I’m not typically one for drama and negativity, but I feel as though something needs to be said about the process in which the winners of this Cupcake Wars was chosen.  How things played out was unfair to all those who participated and to those who cast votes.

When at least a dozen people come up to you after the event and ask… “What just happened?”  I started to really question and think about everything and decided I really wanted to say something about it. 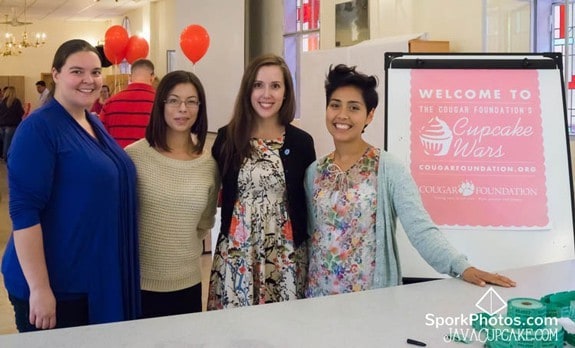 Half way though the event, I was approached by the President and a Board Member (above) of the Cougar Foundation.  They informed me that they had decided they had decided that they no longer wanted one person to win every category but that they wanted three different winners.  Granted, this wasn’t my event to organize and they can do what they wanted, but I immediately thought that changing the rules half way though the event was quite strange and really unfair.

Both the bakers and the voters were given the set of rules and guidelines on how voting was to happen and how a winner would be chosen… all of that was now thrown out the window.

How exactly would they be choosing who would win what category if one person won all three categories?  How was this new process of choosing a winner fair?  This new way of choosing a winner also opened up the voting to be tampered with and the ballot boxes (or bowls in this case) to be stuffed.  I overheard several people talking about buying extra tickets just to make this happen. The entire process wasn’t fair and the winners of this contest reflected that.

I’m not saying that the winners didn’t deserve to win… I’m simply pointing out how unethical the entire thing turned out to be and how the results probably would have been a lot different if the Cougar Foundation would have stuck to their original plan. 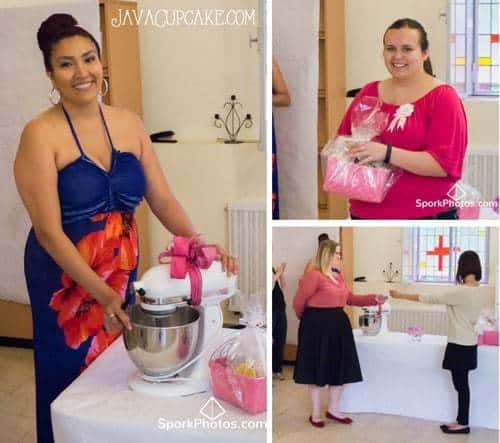 In the end, here’s who won…

Best Overall: Iris with the coconut macadamia nut cupcakes & and the Hawaiian display

Most Delicious: Shannon with the Cherry Limeade Cupcakes

Best Presentation:  Betsy (ME!) with the Milk & Cookies Oreo Cupcakes

On the Cougar Foundations Facebook page, they listed the runners up for every category… and I was it.  *sigh* 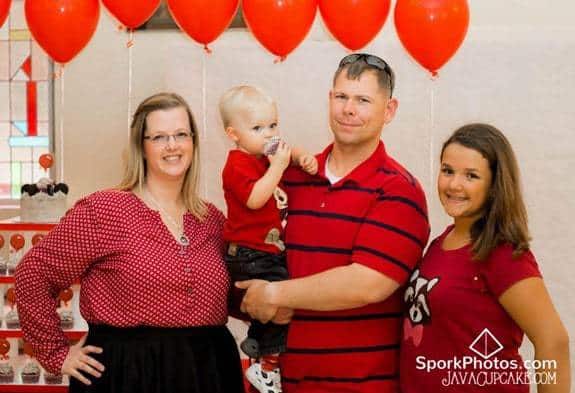 I am very thankful for being recognized for all the hard work I put into my display and presentation.  THANK YOU to everyone who came out to support me and vote for me. I am so incredibly proud of all the hard work that myself, my husband and my kids put into making it all happen.  I could not have done it without them!

I wish I had time to take a picture with everyone who came out to support me… so let this picture of me and Rachel of the Glitter & Bow blog serve as a symbol for my love and gracious thanks to all of you!! xoxoxoxo MUAH! 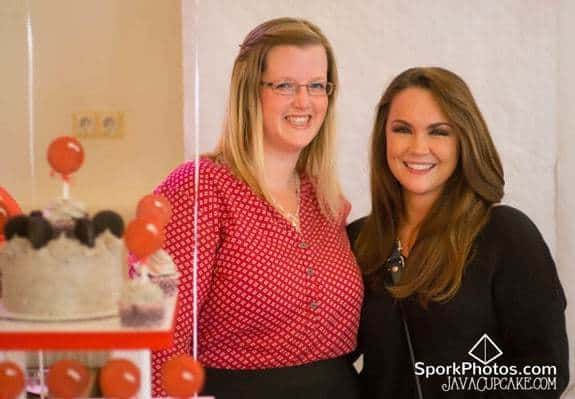 A HUGE THANK YOU to Jacob of Spork Photos and his wife Chrissy of Chrissy.Photography for being my personal paparazzi team at Cupcake Wars!  Your pictures are amazing… THANK YOU!

And how cute are these kids enjoying my cupcakes during Cupcake Wars?! SO ADORBS! 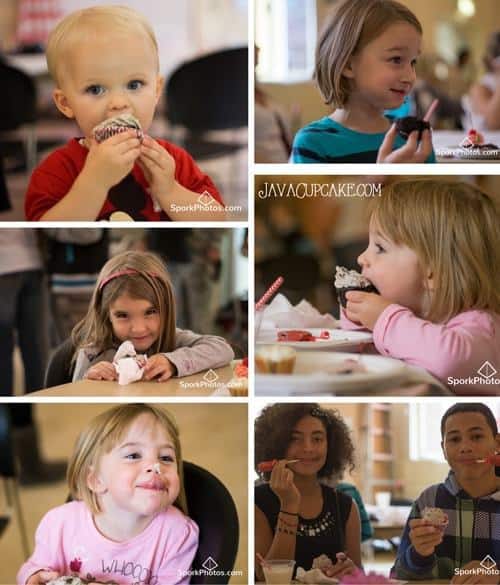 I had an incredible time planning to participate in Cupcake Wars… it was definitely a first for me!  I have never put together something so elaborate from start to finish.  I really truly am proud of it all.  From the cupcakes to the DIY tower to the colors I planned my family to wear, I had every detail planned and I had so much fun doing it!

So much fun… I’m actually considering hosting a Cupcake Wars myself before I leave Germany!  This time, I’ll have a panel of judges, hopefully to include a few owners of cupcake stores from Frankfurt, Munich and Berlin.  How fun would that be?

Again… thanks to Shannon at Sweets & Treats Boutique, Christi at Love From the Oven, Jacob & Chrissy from Spork Photos and finally… my family.  I couldn’t have done any of this without all of you!! xoxoxo

And because this post wasn’t packed full enough of awesome pictures… here are a few more of my favorites! 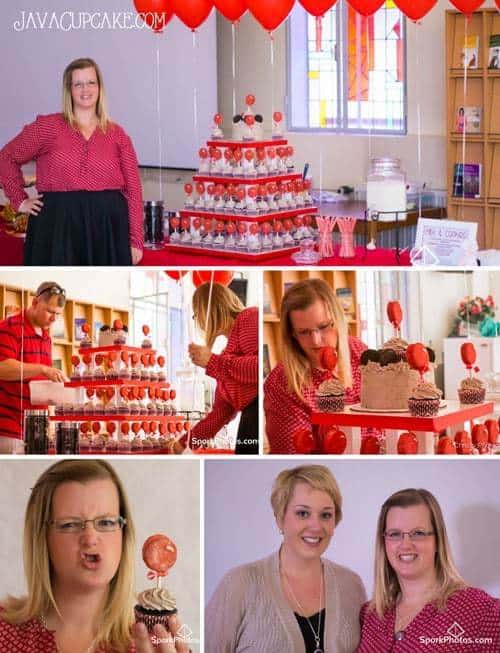 Cupcake Camp was a Success!

Will Bake for Food