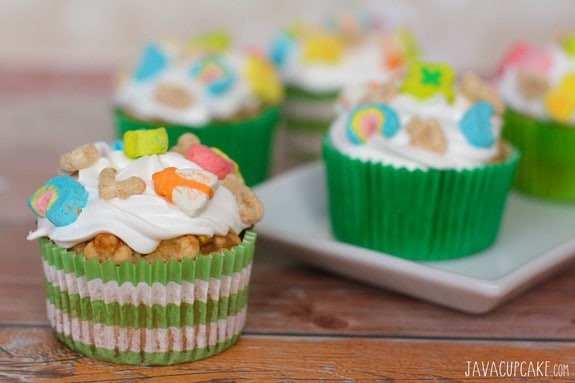 A few years back I made green velvet cupcakes topped with Bailey’s Irish cream frosting for St. Patrick’s Day.  It was way back in 2009, the super early days of blogging.The cupcakes turned out really amazing, but my blogging skills lacked just a little bit.  So, if you’re interested in a little giggle… go check out that post!

These cupcakes, however are a LOT better and this post will be more up to my current day standards of blogging.  Pretty pictures.  Nicely written recipe.  Ya know, the works! 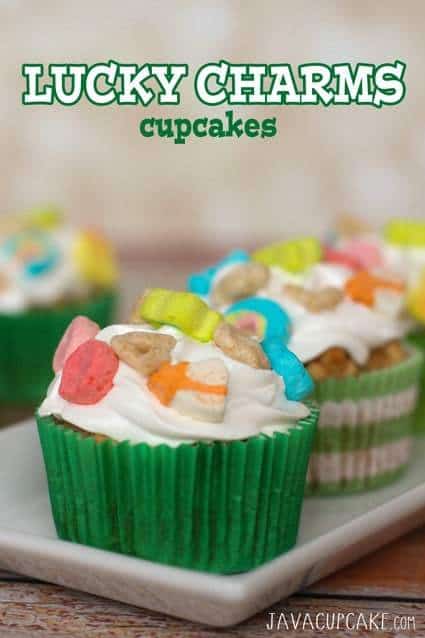 So to celebrate St. Patrick’s Day this year, I wanted to use that famous lucky cereal with those marshmallows.  You know, Lucky Charms! But, I didn’t want my cupcakes to be like every other Lucky Charms Cupcakes I’d seen on Pinterest.  So, I took what I liked from a few different recipes and combined them to make these!

The bulk of the recipe comes from The Novice Chef.  I really love how she made cereal milk by letting the cereal just hang out in the milk.  You know, like what’s left in the bowl after you eat all the marshmallows and throw out the cereal bits from your Lucky Charms?  That deliciously sweet cereal milk is what’s is used in this recipe for the moisture.  Genius if you ask me. 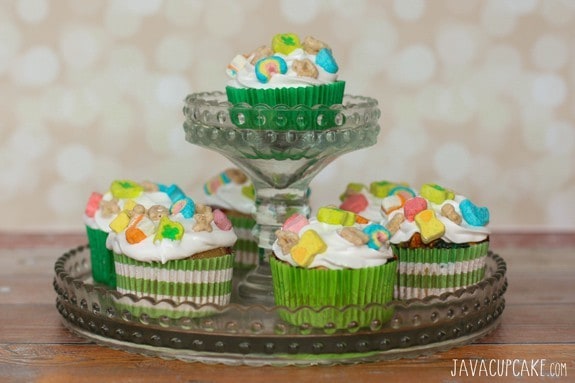 I was actually out of vanilla extract, but I did have maple extract.  I thought it worked perfectly because the maple added a more breakfasty flavor to the entire cupcake.  Perfect combination with the Lucky Charms.

After baking, I did notice that the cupcakes that had less cereal in them puffed up really high.  Some even had a massively big dome on them.  So, if you want a bigger dome, put LESS cereal in your batter.  And to be honest, if I make these again, they will probably only get about a cup of cereal, at the most. 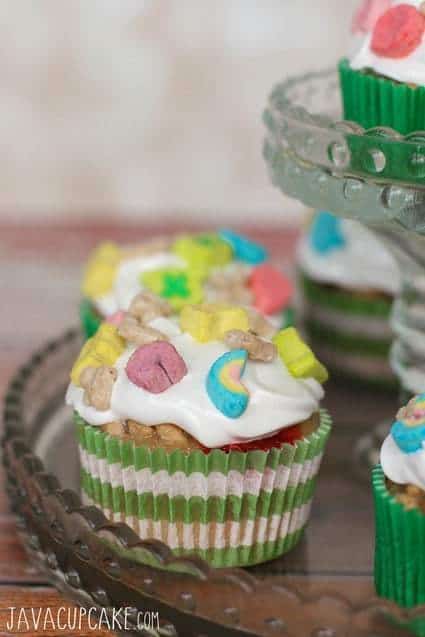 I’m serving these cupcakes up to the kids at my daughter’s middle school today… a lucky treat for them!

Recipe originally from The Novice Chef

I have noticed you don't monetize your blog, don't waste your traffic, you can earn extra cash every month. You can use the best adsense alternative for any type of website (they approve all websites), for more info simply search in gooogle: boorfe's tips monetize your website

I am going to try these next week. Hopefully someone will answer. If I ice the cupcakes the night before I'm going to bring them into work, should I store them in the fridge/outside? Or are they OK at room temperature!? Thank you!!!

Another question, when u say lucky charms cereal you mean with marshmallows right? Thanks

That is exactly what I mean!

Hi Betsy, My daughter is having a sleepover and all the girls absolutely love lucky charms and I was asked to make dessert so I thought about these... Do u think twelve year old girls will like this? And also can I sub maple extract for vanilla extract?? Love the idea :) thanks

I'm sure they'd like these cupcakes! :) You could even have them help you frost and decorate them with the cereal after you've baked the cupcakes! :) And yes... totally sub vanilla for maple!

Lucky Charms were like...my fave cereal! So these cupcakes are calling my name!