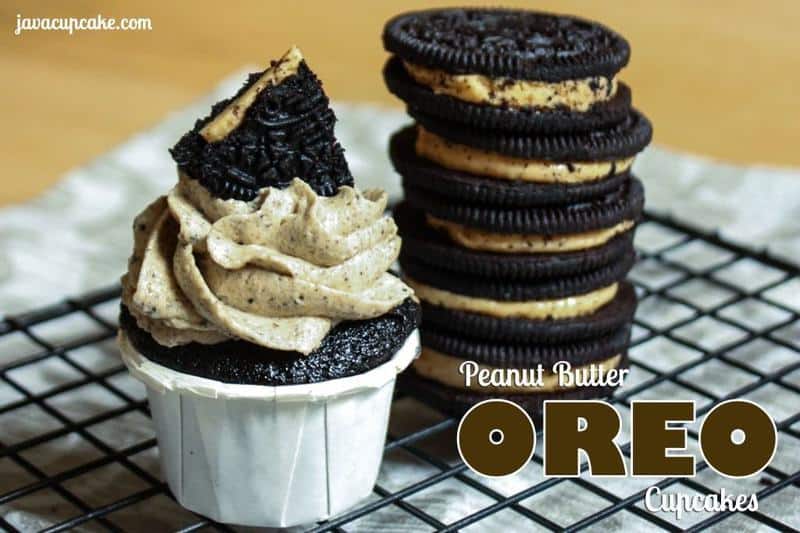 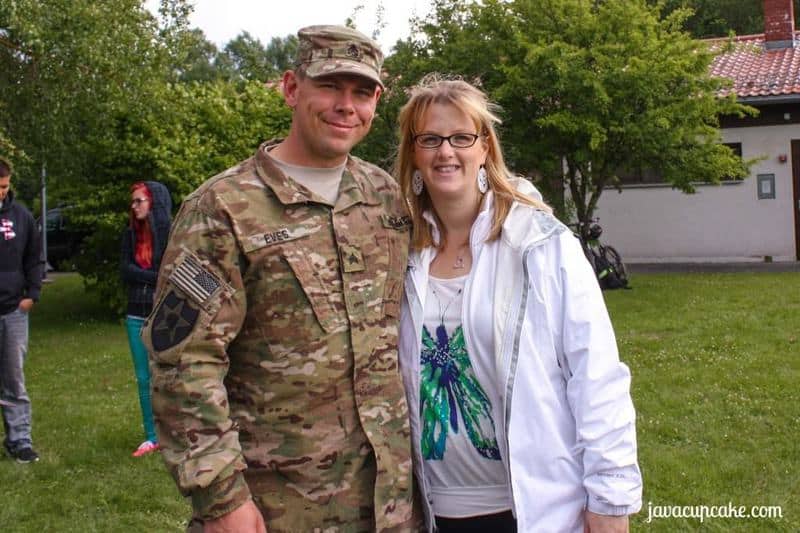 So my husbands unit is deploying.   *sigh*  I know.  I don’t like saying it.  I can’t really even say it out loud… typing it is just as hard.  It will be our third deployment together… but the first in Germany and the first with a new baby.  Most of the friends I made here have moved away to new duty stations… so I find myself stuck, alone… with out a support system in place to get me though. 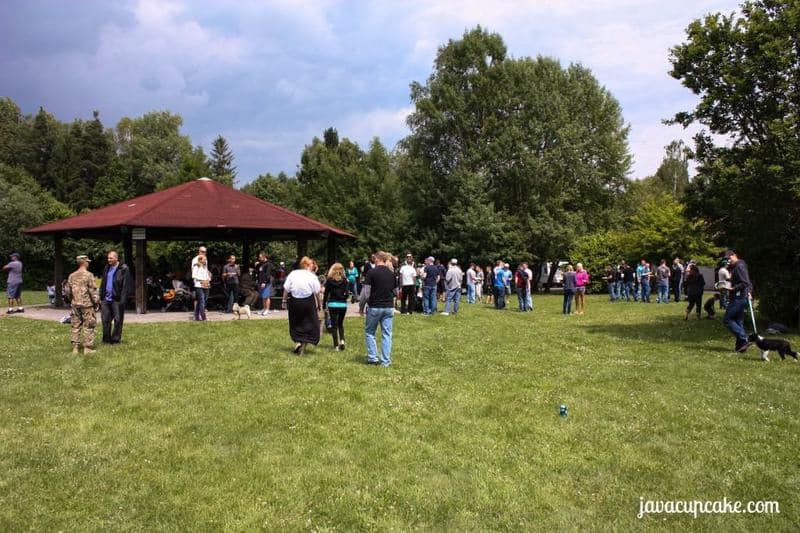 And so yesterday at his Troops pre-deployment BBQ, I thought maybe I could meet a few spouses and make some new friends.  I also thought I might be able to win them over with cupcakes.   Cupcakes + Army Wives + Army Brats + Soldiers = FUN! 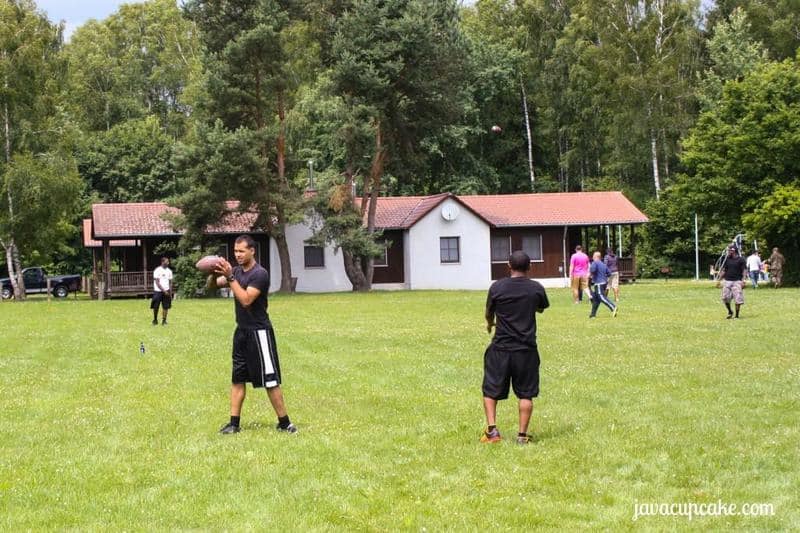 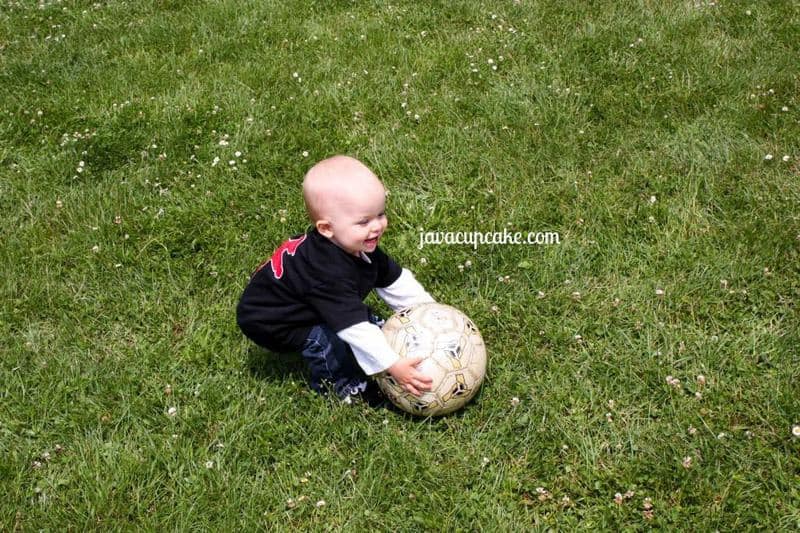 The single soldiers manned the grill, drank beer and played football.  The babies stole the balls from the single soldiers and ran around with them- the dad’s chased after.   The big kids played with the parachute and on the playground and the Mom’s relaxed and chatted with new and old friends.  It was a fun afternoon! 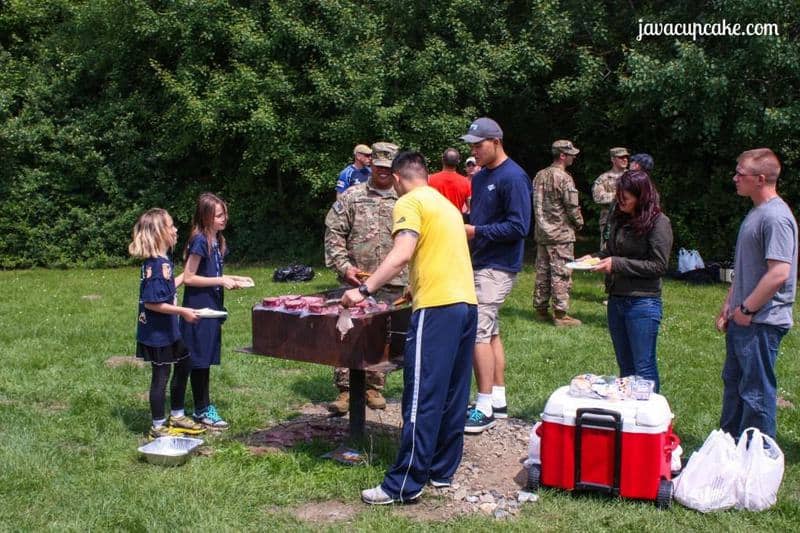 Oh… and there were cupcakes! 5 dozen mini Peanut Butter Oreo Cupcakes to be exact! 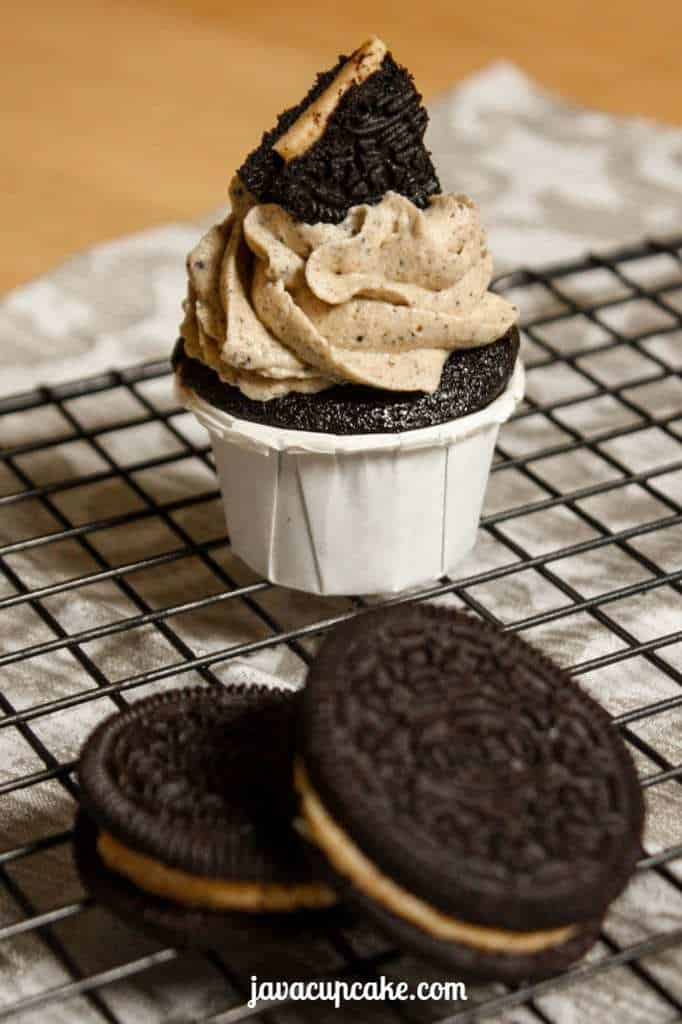 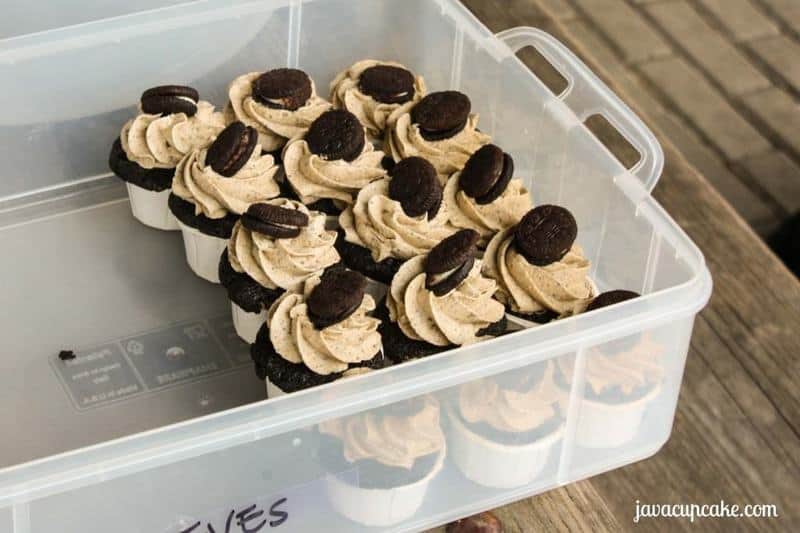 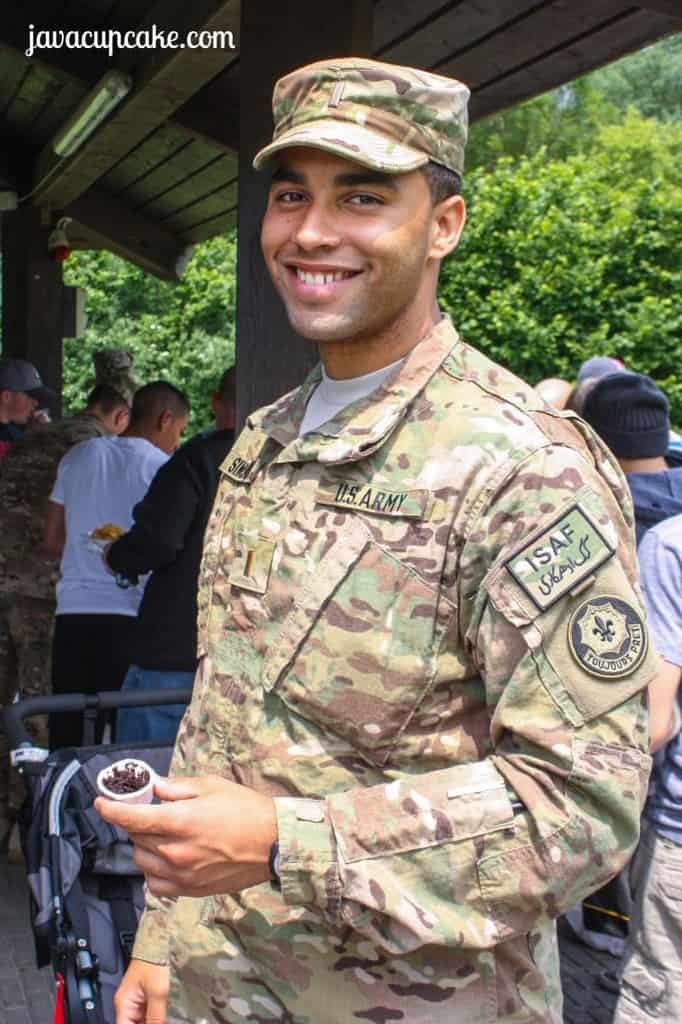 But that didn’t seem to bother this guy… he ate the top off the cupcake before taking the wrapper off. 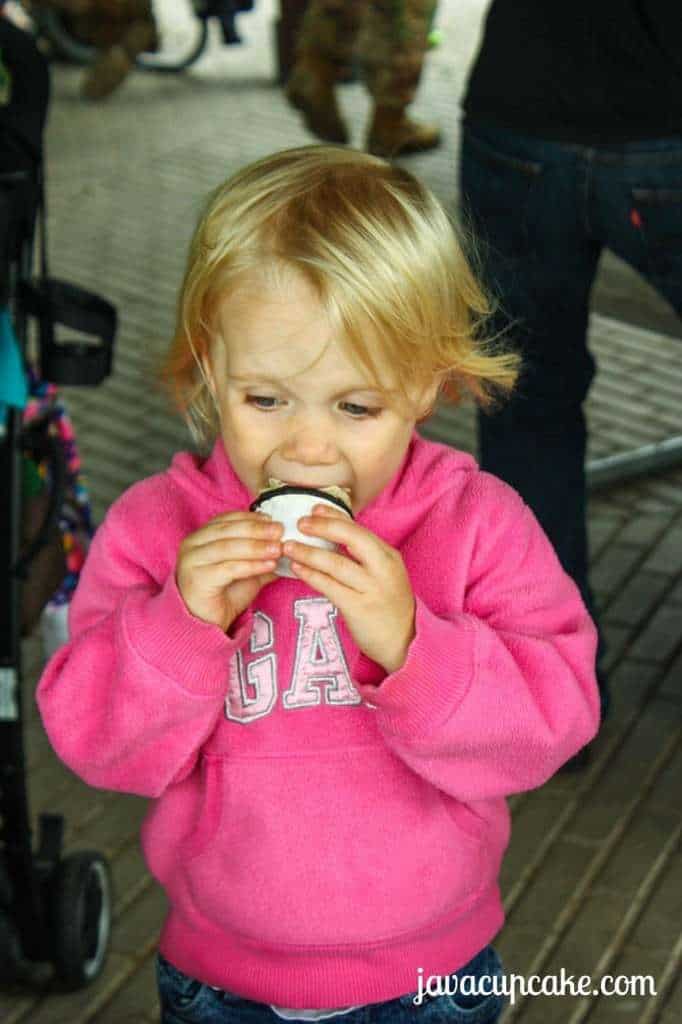 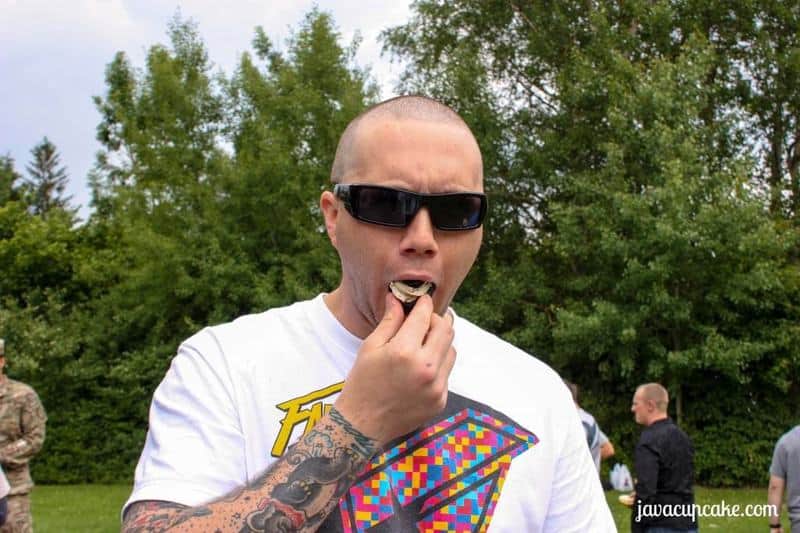 I think shoving my cupcakes in your mouth all at once was a general theme… I saw this all afternoon (well more like about an hour – cause that’s how long the cupcakes lasted before they were gone!).  SGT Zaleuke just shoved the entire cupcake in his mouth! Yes! 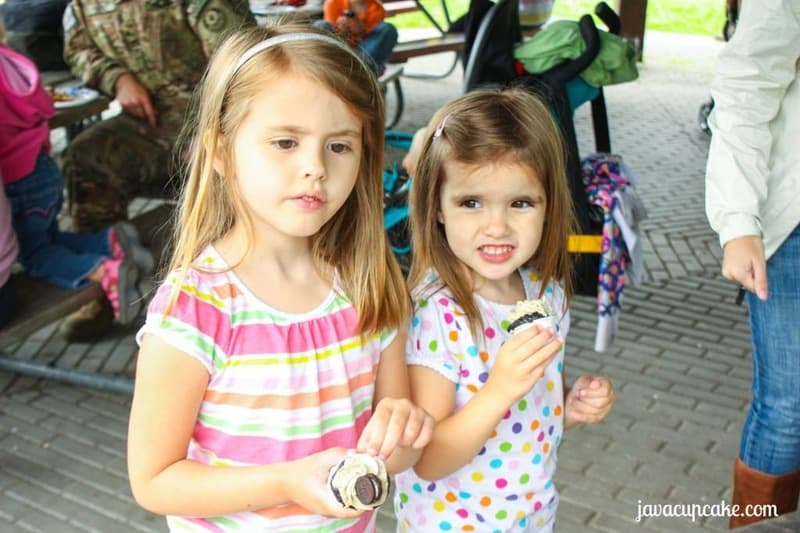 Okay, okay… one last picture of cute kids eating my cupcakes.  Aren’t these sisters the CUTEST… like EVER!

And I suppose you want some of the details about the cupcakes now, right?  Ok ok ok ok… I’m gonna be honest with you.  I’ve made these before.  I bazzzzillllion times.  (You can see those recipes HERE, HERE, HERE or HERE … okay so that’s only 4… but I got lazy and didn’t want to link ALL of them lol)   I used my favorite chocolate cake recipe but added crushed Peanut Butter OREOs to the batter and topped them with my favorite peanut butter buttercream and added more crushed PB OREOs to the BC! Oh… and topped them all off with another PB OREO! 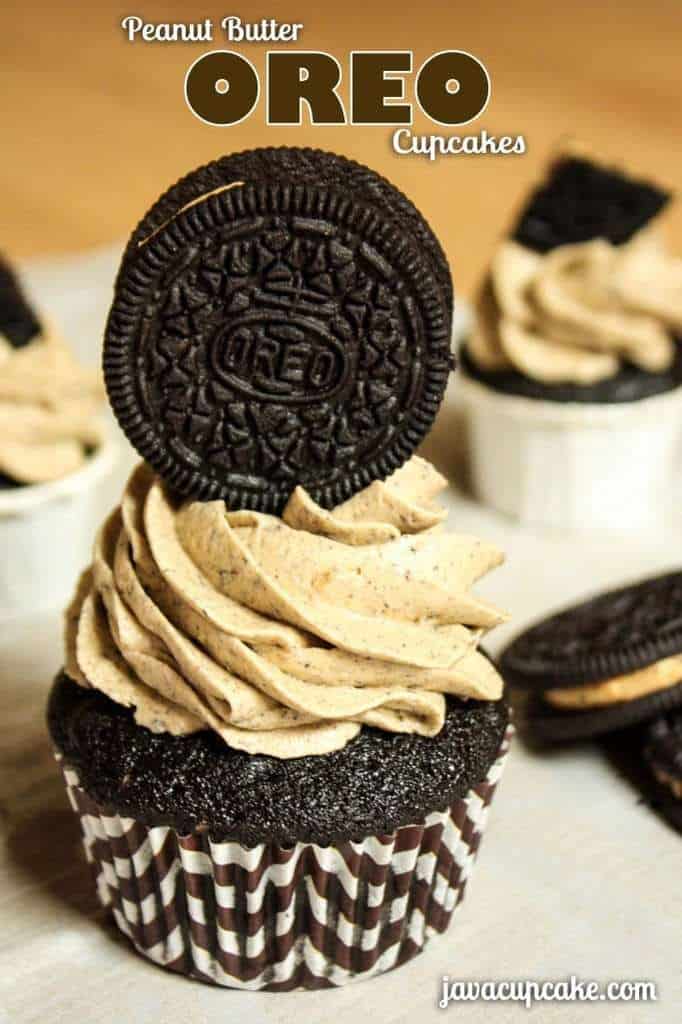 I mean my chocolate peanut butter cupcakes are soooo yummy by themselves… but the addition of the Peanut Butter OREOs really add a the creamy peanut butter flavor to the cake and a bit of a crunch to the buttercream.  So. Good.

So… if you’re like me and you have a peanut butter chocolate obsession… you should make this.  Like, STAT.  Now.   ASAP.

Love those chevron liners?  You can get them at Sweets & Treats Boutique!

I used Wilton Nut & Party Cups instead of mini cupcake liners. The package says "not intended for baking" but I have had no issues baking with them. You could use regular mini liners instead of these cups, but you'll use less batter and this recipe will yield more cupcakes.

I’ve added a new feature to my blog posts! I’ll now be featuring links to where you can get the products and supplies I used to make the cupcakes and other baked yummies I share with you on JavaCupcake!

My Year of Cupcakes

I have a cupcake blog called My Year of Cupcakes. I featured your Peanut Butter Oreo Cupcake recipe on Day 139. Thanks for the adorable recipe!

Sweet! Glad you liked the recipe! :)

hi, did u use whipped cream in the frosting? or was it simply the liquid cream before it was whipped?

It's heavy whipping cream - or heavy cream. It's the cream you use before you whip it to whipped cream. :)

Hi to a fellow military wife. I'm actually lucky since my husband retired last year but I lived your life for 17 of his 20 years in the Navy. I was also fortunate enough to get to live abroad in Naples, Italy. Our daughter was born there 16 year ago. It is a great experience but it is hard without close friends and family nearby. We have two teens and were just surprised with the birth of twin boys. If you would like a friend to talk to, feel free to drop me an email at [email protected] Have a great day!!

Sounds like a wonderful family and an exiting life!! Thanks for reaching out! <3 Betsy

I absolutely love this combination!!!

I think these look devine! I'm not a coffee drinker, so if I were to omit the coffee and espresso powder, what would I sub with if needed? Thanks!!

In my opinion, these cupcakes are only amazing because of the coffee in the recipe. You can definitely omit the esxpresso powder, but I'd use the coffee. There is NOT a coffee flavor or taste in the cake... but a very rich, intense chocolate flavor. The coffee brings out the notes of cocoa in the cake and makes it so super moist! Good luck!