When I first moved to Germany three years ago, I was devastated to realize the closest Starbucks to where I was going to be living was an hour away.   Nuremberg was where I needed to go to get my Starbucks fix. 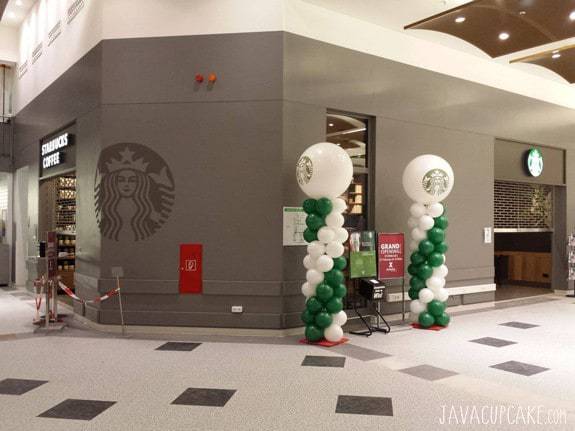 See, I’m from the Seattle area… the home and birthplace of Starbucks Coffee.  I have spent most of my adult life living within a 5 minute drive from at least 5 Starbucks.   And, if I’m being honest, the city I grew up in had about a dozen Starbucks stores in a 10 mile radius.  It was crazy insane how conveniently located my favorite coffee was to everything I ever did in life.

Starbucks is a part of my DNA. 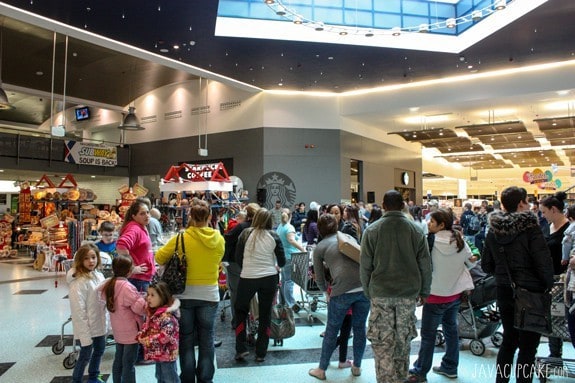 For anyone that follows me on social media, Facebook, Twitter, Instagram… I’m sure you’ve seen the dozens of selfies I’ve posted from the many Starbucks I’ve visited during my time here in Europe.  I’ve been to Starbucks in Germany, Austria, Czech Republic and Switzerland.    This summer, I’ll add France and the UK to that list! 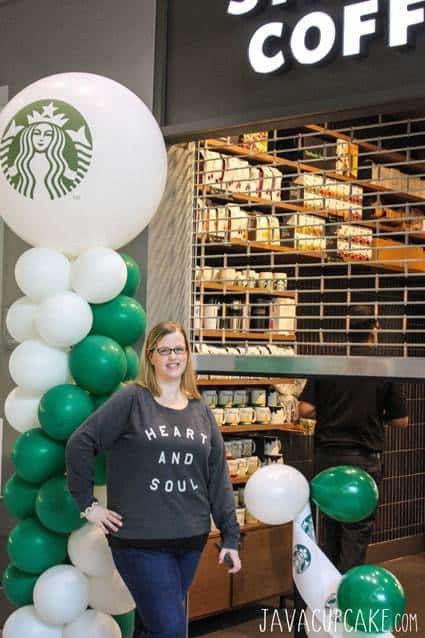 Of course, I couldn’t go to Starbucks without my two Starbucks-loving friends Chasity and Rachel!  I got Chasity hooked on buying Starbucks mugs while traveling… she doesn’t actually like Starbucks.  Her hubby even got me a Jordan mug while he was there sweeping for bombs with his K-9 unit for Obama.   Rachel is my bloggy friend from Glitter & Bow and she just loves coffee… and Starbucks. 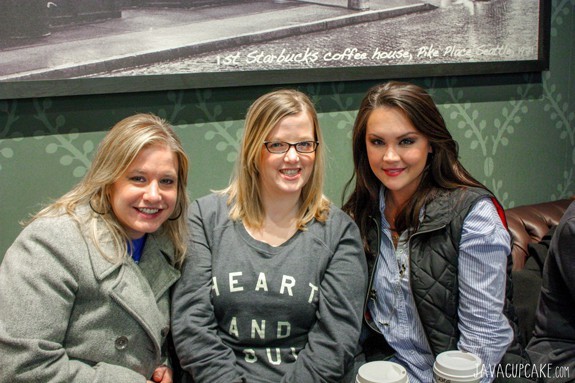 There were several hundred people at the Grand Opening celebration including lots of high ranking officials including the US Army Bavaria Garrison Commander and the head of AAFES in Europe.  During the opening ceremony speech, the emcee mentioned that it cost $375,000 to build this Starbucks and this location was the 4th Starbucks to open in Europe on a US military base with more to open in the future! 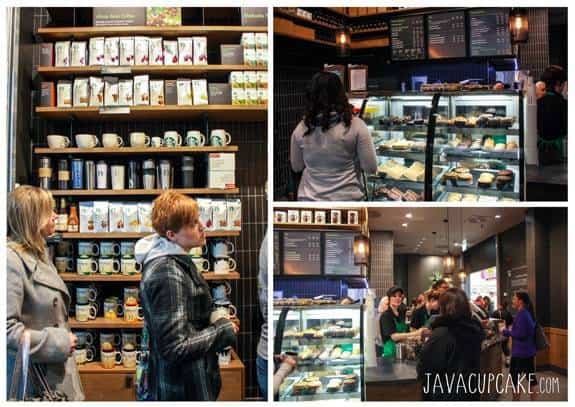 This Starbucks isn’t the biggest store, but it’s better than not having  a Starbucks at all!  There are two seating areas (I didn’t take pictures of those since it was so crowded), a small merchandise display and a lots of snacks and goodies available in the cold case.  I was told by an employee earlier in the week that they hope to have Grafenwoehr mugs, but had to lobby the corporate office to design and make them! 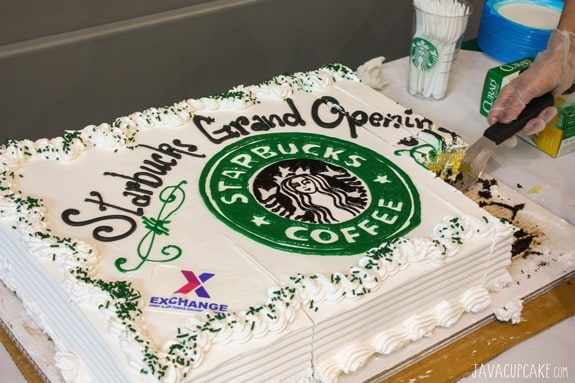 It wouldn’t be a party without cake either!  Since this Starbucks is partnered with AAFES and the Exchange, they had a big cake made to celebrate with the Starbucks coffee logo on it!  It was actually pretty tasty! 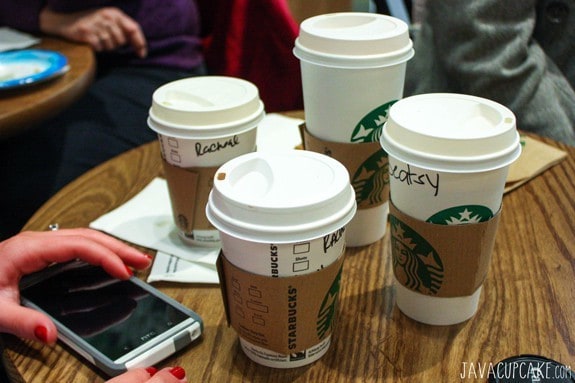 So, what was my first order in the new Starbucks?  I got a Vanilla Spice Latte!  It was pretty tasty too!  Smooth vanilla flavor with a hint of spice.  It was a nice diversion from the usual vanilla latte!  These four coffee’s wasn’t even our complete order… Chasity had a strawberry frapp, but it wasn’t ready when I snapped this picture.  That tall caramel macchiatto in the back… it was free.  I love that Starbucks lets you keep the coffee mistakes!

Oh… and it wouldn’t be Starbucks if they didn’t completely butcher the spelling of my name on my cup.  Beatsy? lol 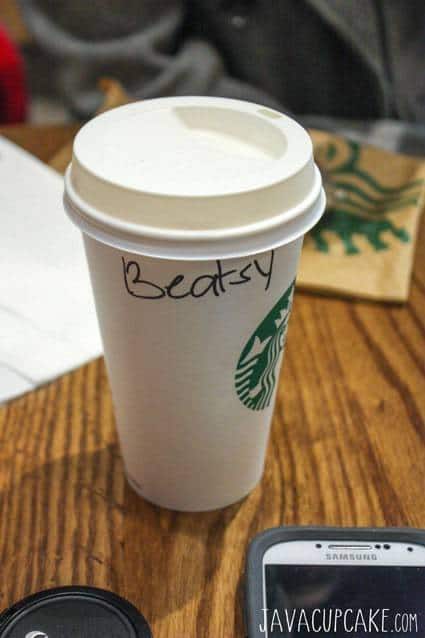 Matty came with me to the Grand Opening.  He loves Starbucks too!   As a part of the grand opening, they handed out balls and balloons for the kids.  And Matty drank pretty much all of Chasity’s Strawberry Frapp.  hehe  He was a spoiled and happy baby! 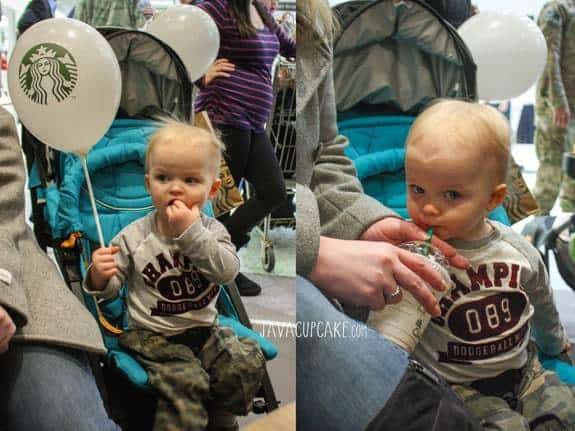 It was a pretty great morning!  I’m so super happy to have a piece of my Seattle home so close to my home here in Germany now.  There are very few things in life that I’m super passionate about… and Starbucks is one of them!

I’ve already decided that once a week I’m going to take an hour for myself at Starbucks.  Grab my laptop, get a coffee and just sit and enjoy being in my favorite coffee house.  Dave calls that being a Seattle snob.  I call it being happy. 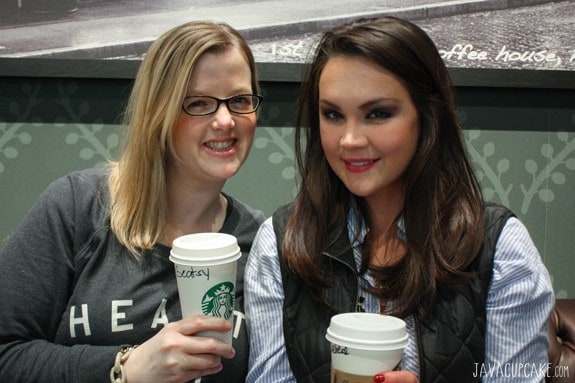 And just because it’s what we do… everytime we’re at a Starbucks… Chasity snapped this picture of Rachel and I taking a selfie for Instagram.  We’ve done this together so many times.  We’re dorks.  I know.  :) 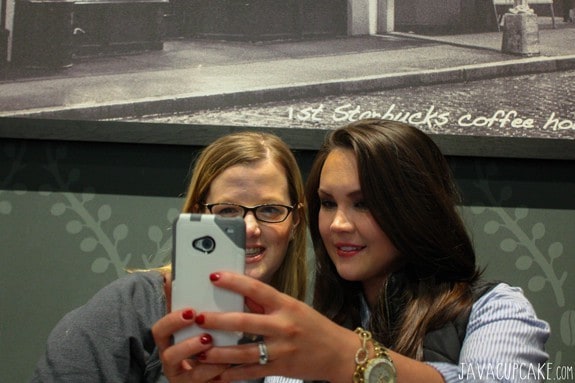 And finally here’s my favorite selfie of the day! 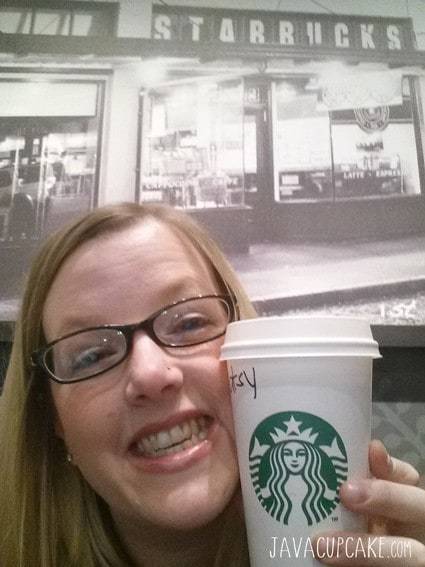 Hi Betsy, can we visit the Starbucks in Grafenwoehr too? Is it open for public? Regards from Nuremberg Berit

The Starbucks in Grafenwoehr is located on USAG Bavaria - Tower Barracks. You can get on the military base if you have a US Military ID card or if someone you know on the base can register you at the Visitors Center as a guest. Hope this answers your question! Betsy

Hi! We were also at the Starbucks Grand opening. We were standing up front and my daughter was chosen to help cut the ribbon. I was only there because my friend wanted me to go with her so I didn't have a camera. Do you by chance have a picture of the ribbon cutting? My daughter was in a fancy red dress.

Hi Crystal - I just looked through all the pictures I took of that day and I don't have any of the ribbon cutting. Sorry!

I hope Starbucks does open up more stores on military bases. It is the least they/we could do to give some joy to people serving in the military and their families. Enjoy Betsy because you deserve it! Thanks for all your posts!

Thank you for the kind words, Luanne!

Such a fun day!

Looks like a fun and amazing time! it is nice to have a little bit of home when you are so far away from home!