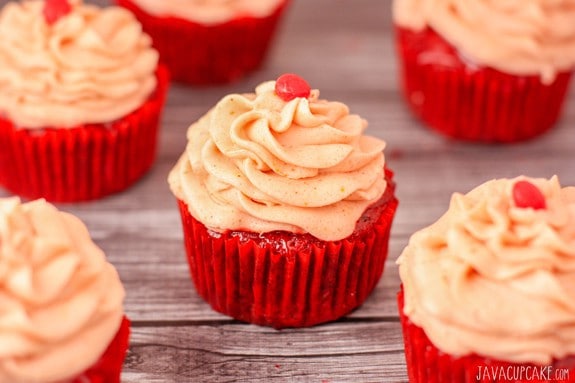 I haven’t made a cupcake in a while… so I wanted to make something that I had never done before! And since it’s Valentine’s Day, I thought why not make it a themed cupcake… Red Hot Velvet Cupcakes!

Red Hots or Cinnamon Imperials candies are the prefect little spicy red candy to decorate cupcakes or cookies with but often times are used only at Christmas.  I know I’ve used them for years to decorate our holiday cookies with.  But since they’re red in color, I knew they’d be a great addition to any Valentine dessert! 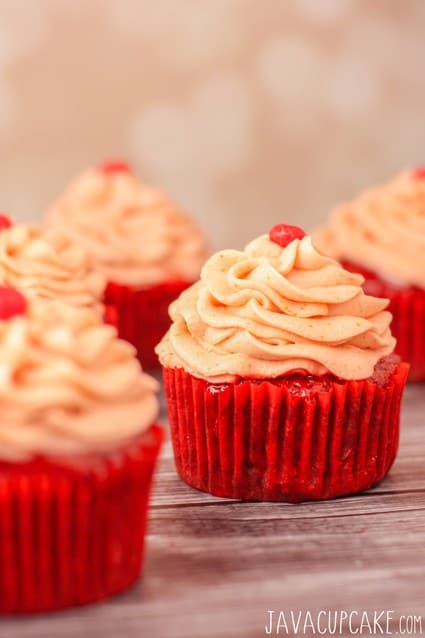 I didn’t just want to toss the candies into the batter and call it good… I wanted really get the spicy flavor of the candies into the cake.  So, I made a simple syrup out of the cinnamon candies and drizzled it over the cupcakes.  This way the spicy flavor would soak into the cupcake and would be a prominent flavor! I also used that same syrup in the buttercream frosting and added a bit of chili powder for more of a spicy kick! 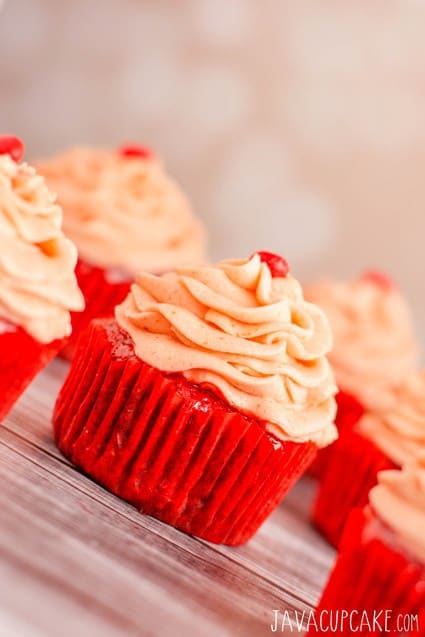 These are some seriously unique cupcakes.  And they definitely aren’t for the faint of heart… they’ve got a kick with all the chili powder and cinnamon red hots in them!

If you’re looking for something unique and different, then these are the cupcakes for you.  Flavor wise, they truly are one of the most different cupcakes I’ve ever made.  They aren’t really chocolate… they aren’t really red velvet… they pack a punch of spice and there’s this syrup glaze on top that leaves your mouth going WOOOAAAAAH! 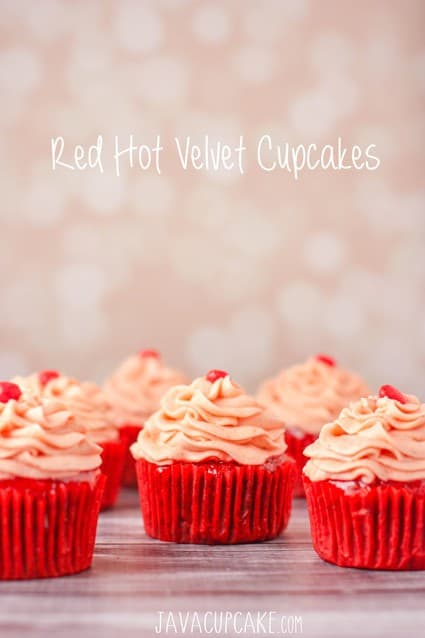 Holy shinzit, this is so cool thank you.

Those look super delicious Betsy! Now that you have a Starbucks near you too....I'm looking forward to some "Coffee" Infused Cupcake Recipes.

these look delicious, and your site is amazing!! i love the colors and how it is set up!! inspiring :) what apps do you use for the pop up on the right "you may also like" and the bar at the top that talks about giveaways? love it!!! #sitsgirls

Thank you for saying so, Becky! I love any feedback... especially the flattering kind! So, THANK YOU! The bottom pop-up is called the "nrellate flyout" and the bar at the top is the "Hello Bar". "nrelate" is a plug-in for wordpress and "hello bar" is a website that you build the bar on, then insert the code into your blog. Hope this helps! :) Happy Blogging!

My husband is going to love these. Thanks for having the pin it app so I can actually get back to this and make them.

My mother-in-law has a recipe for cayenne pepper chocolate cookies and I really like the spicy chocolate combo. I don't necessarily love the cinnamon chocolate combo, but you make these look so good I might have to try them.

I'm not a huge fan of spicy either... but there's something about a subtle kick of heat with chocolate that I love. So those cayenne pepper chocolate cookies sound really good!