Saturday was the boyfriend’s birthday… he asked for S’mores cupcakes and since it was his birthday, I had to find a super awesome s’mores cupcake recipe!  The best thing about this recipe is the all kinds of amazing marshmallow fluff that becomes the frosting.  The 2nd best thing about this recipe is the little torch that you get to use to get that authentic s’mores feeling for your cupcakes ;)  Birthday boyfriend was not disappointed!

I think these are probably one of the fanciest looking cupcakes that I’ve ever made… they also tasted pretty great.  The graham cracker crust is super easy to make, the chocolate cake is moist and full of flavor (although, if you have a chocolate cake you already love, nothing says you can’t use that instead of this recipe) and well, the homemade marshmallow fluff-I could have eaten that stuff ALLLLLL the live long day.  I wanted to make it again and eat it by the spoon full just ’cause.  But then I realized that’s a little out of control.  I think next time I’ll make some whoppie pies and use the fluff in the middle *drrroooollll* … yum. 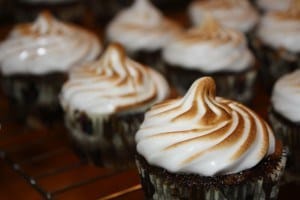 You can find this s’mores Cupcake recipes in a few different places, but I think most posts say that they were originally inspired by Trophy Cupcakes, which is up in the Seattle area. I’ve never had their s’mores cupcakes, but I’m a big fan of their Hummingbird cupcakes so I’m sure those are delicious as well.  Just a heads up, the chocolate batter is really thin, maybe that doesn’t stress you out, but it always stresses me out.  Please don’t fret, it will be thin, but the cupcakes will turn out great.

You’ll need a cooking thermometer and a little butane torch on hand to make these cupcakes.  I highly recommend the cooking thermometer because you need to make sure that the egg whites mixture reaches a certain temperature to be safe and the butane torch is super helpful (especially if you love some creme brulee ;)) and much safer than the oven/broiler method, which I super don’t recommend, lol.   I picked up my little torch from Bed Bath & Beyond for about $30 and the butane was about $8. 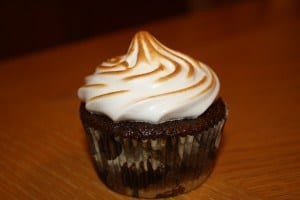 Hope that you all have an amazing week ;) and you enjoy these super fun cupcakes!

I Cant believe i still have never tried smores, These cupcakes look yum and i am so going to try them. My son will love them. thanks for this recipe.

Everything turned out great, except my frosting. I don't have a thermometer, so I went off of going for about 20, and a little extra just to be sure. I don't have a stand mixer either, just a hand one. I mixed for about 30 minutes after the double boil method, and it won't hold shape... Any suggestions?

It probably wasn't at the right temperature.... when things call for an exact temperature in cooking.... it's best to get a thermometer! Hope you try again!! xoxo <3

I did these and used the marshmalow cream to fill them as well and used a marshmallow buttercream instead on top and they were a HUGE hit!! Thanks for all your yummy ideas I love visiting I find a new one to make every time I check it out!

These look so good!!!