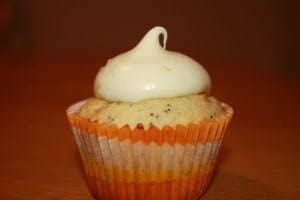 I’ve been dreaming of Betsy’s Strawberry Lemonade cupcakes for the last few days…it might be the sunshine, it might be Spring Fever… not really sure, but they sound amazing.  They’re definitely still on my list of need-to-make-ASAP! But, I wanted to make something quick and easy, with ingredients that I already had in the kitchen… enter Orange Zest & Poppy Seed Cupcakes with an Orange Zest Cream Cheese Frosting!

I used the Lemon Poppy Seed muffin recipe that I posted a few weeks ago but with oranges instead (duh, lol) and I added frosting.  Cause well, isn’t it a Cupcake if it has frosting?  I think that’s the rule.  Either way, they only took about 10 minutes to whip up and the cream cheese frosting is just the staple recipe that I use all the time with a little bit of fresh squeezed OJ and some zest. They’re fresh, they’re pretty (and you all know how I feel about pretty already!) and they’re fun.

Poppy seeds always seem to make everything a little bit more fun.  FYI, you can find a little jar of poppy seeds in the seasoning/spice section of your grocery store.  When spices are on sale you can get it for a pretty good deal.  I like to have them on hand because they’re a nice addition to salads and coleslaw as well. ;)

When I made the Lemon Poppy Seed muffins, I used my extra large muffin tins, so I only had about 7-8 huge muffins. With these, I wanted regular sized cupcakes so I used my ice cream scooper and filled it about 3/4 way with batter (so that my cupcake liners were 2/3 full with batter) and I had a full 2 dozen.  They turned out super cute :) 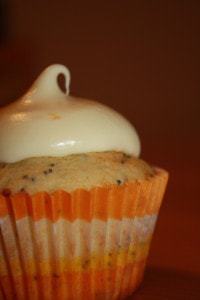 To pipe the frosting, use a large round tip.  Start in the middle of the cupcake and squeeze until you have a large dollop in on your cupcake, then swirl just a bit to get a little curly tip.  The cupcake liners are from Bake it Pretty, of course, lol.  How awesome would these be with orange creamsicle cupcakes?! Those are on the need-to-make agenda as well!

Are you baking anything exciting this weekend?  We’re having a big Hawaiian feast, so the Aloha Cupcakes are on our menu ;) PS. don’t forget to let me know if you’re going to be at the opening of Burning Cupcakes on May 7th in Tacoma on 6th Ave!  Hopefully I’ll get to meet a few of you there! 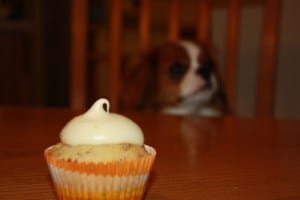 I figured no one can resist a cute pic of the pup ;) she was pretty interested in the cupcakes tonight!  She tried super hard to get a taste with no success, but she was cute nonetheless (I had to google that, bc I wasn’t sure if it’s a real word. Turns out it is.  lol) 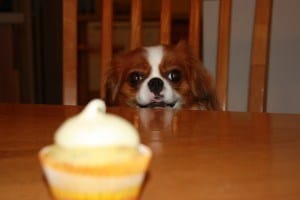