Breakfast cupcakes are pretty much the best thing ever in my house right now.  Blueberry pancake cupcakes?  Big hit!  French toast & bacon cupcakes?! BIGGER HIT!! Let me just tell you… me & bacon, we’re like the best of friends.  I could probably eat bacon with all of my meals or I try to fit bacon into all of my meals, either way, I HEART BACON.

I also heart french toast.  This was an amazing little combo.  Kudos to the person who came up with this idea, I want to be your best friend as well!  I’m sure you’ll heart it too :)

These cupcakes were  super moist and after they came out of the oven and were still nice and hot, I poked them a few times with a skewer and drizzled some maple syrup over them and then let them cool before frosting them.  I used some tasty maple syrup (grade A, dark amber), the sort of expensive kind from the grocery store, but it was totally worth the few extra dollars.  By sort of expensive I mean a few more dollars than Aunt Jemima or Mrs. Butterworth but not out of control.  The syrup is also pretty awesome in the frosting… mmmmm, maple syrup cream cheese frosting.  Yes, please.  You’re welcome to cook the bacon the way that makes you the most happy… I like to bake mine in the oven.  It comes out crispy and delicious. 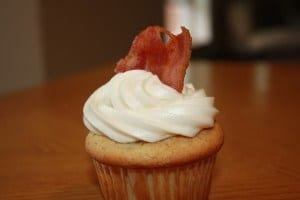 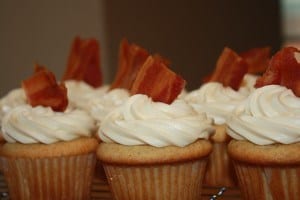 Hope you enjoy… have an amazing weekend, Javacupcakers! See you next week ;)

Oh Wow.. I Love bacon... and I LOVE french toast....never would have thought of making something like this into a cupcake.. awesome idea.. can not wait to try it.. thank you for sharing :)

Yay!!! Let me know how they turn out! My family looooved them! :)

Holy crap! These will be getting made lol. Thanks for this awesome recipe.

No problem!! Hope you have a great weekend filled with cupcakes ;)