I don’t eat a ton of candy but I love me some heath bars, toffee is pretty delicious.  I was wandering around the baking aisle at the grocery store (when I bought more baking powder for the lemon poppy seed muffins) and I decided to buy a few bags of heath bar candy bits.  I didn’t have a recipe in mind, but I figured it would find one online and all would be well in the world.

Wrong.  Or sort of wrong, I should say.  I found a ton of recipes for sticky toffee pudding and toffee cake, but they all used cake mixes.  I’m not gonna hate on cake mixes but I really wanted to make them from scratch and I didn’t have a cake mix around, so that really wasn’t going to work anyways.  Long story short, I found a recipe that looked like the base of what I wanted to have, added a cup or so of heath bits, baked them and kept my *fingers*crossed* that they would turn out okay… and they did! YAY!

Instead of using the caramel buttercream that was included in the Snickers Cupcakes recipe that I found, I decided that I really wanted a coffee frosting to play off of the toffee flavor.  I used a Starbucks Via packet that I had on hand.  The flavors really did come together nicely… this cake is super moist, I love the bits of toffee in the cake mix, the frosting is sweet but has a nice kick from the coffee and overall I’m a happy girl. :) 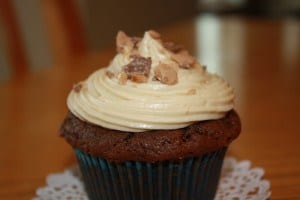 In a medium saucepan, combine the butter and the sugar over medium heat.  Heat, stirring occasionally to combine, until the butter is melted.  Remove the mixture from the heat and transfer to the bowl of an electric mixer fitted with a paddle attachment.  Beat on medium-low speed, 4-5 minutes, until the mixture is cooled.  Mix in the eggs and egg yolk, one at a time, scraping down the sides of the bowl as needed and beating well after each addition.  Mix in the vanilla and then the cocoa mixture and beat until incorporated.  With the mixer on low speed add in the dry ingredients in two batches, alternating with the sour cream, beating just until combined. Add heath bits until incorporated.

Divide the batter between the prepared cupcake liners, filling them about ¾ of the way full.  Bake 18-20 minutes or until a toothpick inserted in the center comes out clean, rotating the pans halfway through baking.  Allow the cupcakes to cool in the pan 5-10 minutes, then transfer to a wire rack to cool completely.

To make the frosting add the butter to the bowl of an electric mixer.  Beat on medium-high speed 1 minute until smooth.  Blend in the confectioners’ sugar until smooth, 1-2 minutes.  Mix in the vanilla and instant coffee.  Add the heavy cream and whip on high speed until light and fluffy, about 3-4 minutes.  Sprinkle cupcakes with a few heath bits.

I do plan on making those Snickers cupcakes eventually, because they look pretty amazing… if you’re feeling adventurous maybe you can make both :) 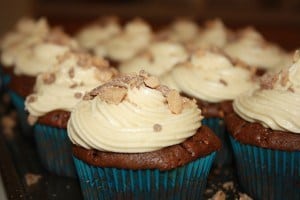 If I don't want to go buy the Starbucks VIA Ready Brew, what do I use?

Not sure.... I've never made it without it. But I'm sure any instant coffee would do.

This recipe and your blog featured in the Weekly Blend over at Scrappy Java Girl!

That's awesome! ;) Thanks for the shout-out, Beth! Happy weekend!