Happy Monday and First Day of Summer… it’s such a pretty GRAY chilly day out. FABULOUS.

Ok not to beat a dead cupcake so to speak but today I am going to talk about Cupcake Wars on the Food Network.  I have only watched one episode but after that one I can only assume that it’s not getting any better. 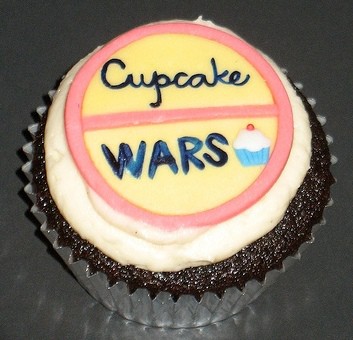 Upon the first couple of minutes it was clear that the format of the show was the tried and true “Iron Chef” … but the table of ingredients the contestants had felt less exciting. I mean make a savory cupcake … ok… your choices are bacon, maple etc etc etc. WOW my choices are either a seafood item or a flavor combination that everyone does.   Which one will I choose!?
Hoping for all hope that it’s going to get better I keep watching… did anyone else notice the assistant on the winning team was actress Maureen Flannigan?… http://www.imdb.com/name/nm0281234/ I honestly for the next five minutes was googling her, is she in the cupcake business now? Why is she there? Why is she confused? Is she a stand in?

Ok… round one, underwhelmed… round two, even more unimpressed and then round three…

Make 1000 cupcakes and a display…  Both displays where original, the tier was classy… the golf course was cheap… the fact that it won was amazing.  Also does anyone believe it was made in the time allotted, painted and then dried? A little TV magic maybe… but what I couldn’t get over was all the crying and yelling.  I mean its CUPCAKES. I can understand TV stress and pressure but really?!

So my blog today as you can tell has been building and become more of a rant.  I’ll probably find myself watching more episodes but so far, Cupcake Wars was more of a backyard brawl.

Thanks to Two Parts Sugar for the photo!

When Hollis was running out of time there, I thought for sure her assistant was going to touch her finger tips together and give her all the time she needed to finish up. I hope that didn't happen cause that wouldn't have been fair!

Maureen Flannigan was on because she's the sister of Hollis, the owner and Sweet! and the winner of that challenge.

A fellow baker just filmed an episode and taste is HUGE in the final outcome. The way it's edited may not show it as much, but it's made obvious that if your cupcakes are generic or don't taste delicious, your presentation isn't worth a damn. The fact that the less appealing of the displays won is actually testament to the fact that taste is more important.

The displays are brought into the final part because part of the deal is that they are to be displayed for a huge group of people, and they want something fun for that as well. They never set out to do a show based solely on cupcake taste, that wouldn't bring in viewers. Much like their cake challenges, display and appearance has to play into it.

Lisa, great writing! I have to agree with you on pretty much everything. As a cupcake baker I am saddened this show isn't about the meat of it all...the taste. It's decorating and display. Some of us could care very little for fondant whales and magical twirling light displays. We care about bringing the best flavor to the peoples lips who eat our baked goods. I wish it was a serious tasting show with rules about not going overboard with decoration. I'm so sad to see it all about the sprinkles and the froo froo and so little about taste! And WHY do all the cupcakes crumble so badly when they put their fork through them? I can only imagine how bad those "pretty" cupcakes taste.