Bakerella made cinnamon rolls this week and I couldn’t stop thinking about them.  They looked like HEAVEN.  I could just smell their sweet cinnamomy goodness wafting thru my house just looking at the pictures. I’ve never made anything like them before, so I knew it would be a challenge.  Tonight, I put my skills to the test and made some!

The recipe comes from the Pioneer Woman… and it’s pretty simple, however very time consuming.  You need a good three hours to dedicate to making these bad boys.

A few notes about the recipe before I post it…

Now on to the recipe!!

Mix the milk, vegetable oil and sugar in a pan. “Scald” the mixture (heat until just before the boiling point). Turn off heat and leave to cool 45 minutes to 1 hour. When the mixture is lukewarm to warm, but NOT hot, sprinkle in both packages of Active Dry Yeast. Let this sit for a minute. Then add 8 cups of all-purpose flour. Stir mixture together. Cover and let rise for at least an hour.

After rising for at least an hour, add 1 more cup of flour, the baking powder, baking soda and salt. Stir mixture together. (At this point, you could cover the dough and put it in the fridge until you need it – overnight or even a day or two, if necessary. Just keep your eye on it and if it starts to overflow out of the pan, just punch it down). 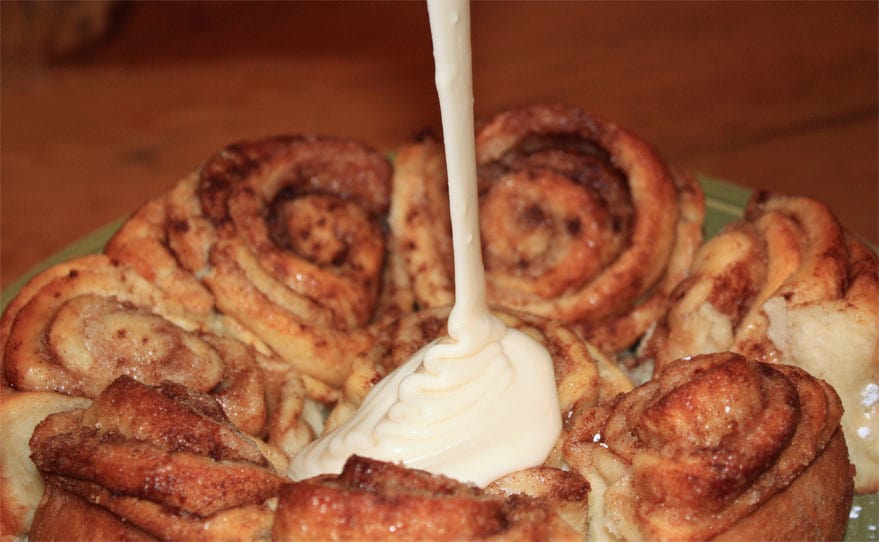 When ready to prepare rolls: Sprinkle rolling surface generously with flour. Take half the dough and form a rough rectangle. Then roll the dough thin, maintaining a general rectangular shape. Drizzle 1/2 to 1 cup melted butter over the dough. Now sprinkle 1 cup of sugar over the butter followed by a generous sprinkling of cinnamon.

Now, starting at the opposite end, begin rolling the dough in a neat line toward you. Keep the roll relatively tight as you go. Next, pinch the seam of the roll to seal it.

Spread 1 tablespoon of melted butter in a seven inch round foil cake or pie pan. Then begin cutting the rolls approximately ¾ to 1 inch thick and laying them in the buttered pans.

Repeat this process with the other half of the dough. Let the rolls rise for 20 to 30 minutes, then bake at 400 degrees (see note below) until light golden brown, about 15 to 18 minutes.

For the frosting, mix together all ingredients listed and stir well until smooth. It should be thick but pourable. Taste and adjust as needed. Generously drizzle over the warm rolls. Go crazy and don’t skimp on the frosting. 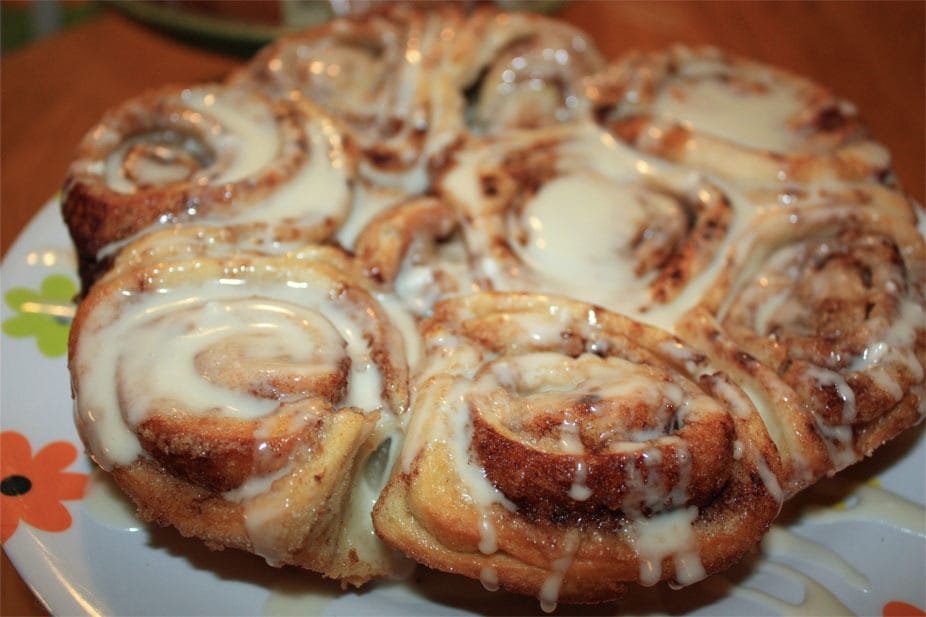 Do you think you could substitute whole milk for skim?

I'm sure you could.... the fats in the whole milk help make the dough so ooey gooey and delicious!

I have written this recipe down in my book and will be making them this weekend. My step Kids are American so they will love them as will my boys. I'm in Northern Ireland.

I LOVE this recipe!!! And yes it makes a lot of dough -- I put them in foil pans and give them to friends as a gift around the holidays!

ps. I use molasses in the icing - YUMMO!