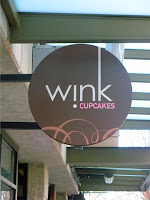 Oh…. when I saw you, I knew we’d go together like a “Wink” and a smile!! Oh yes, little Wink cupcakes you were made for me and I was made to smile for you!!

My little angel and I hopped in the Routan and jetted up to the big city of Seattle to the quaint neighborhood known as Queen Anne.  My mother lived in this neighborhood back when she met my father, so I knew this place was magical.  Wink Cupcakes, well you’ve continued on with that magic with your cupcake shop! 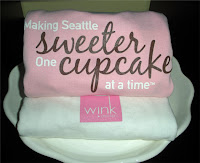 My friend Jen met up with us just outside of Wink and we were more than excited to try out their cupcakes! As we entered, we were greeted by several staff all dressed in the cutest little t-shirts!  They read: “Making Seattle Sweeter One Cupcake at a Time”.  How freeking adorable is that??? (PS, if I wouldn’t have spent all my money on cupcakes, I would have walked out the door with one of these shirts too!)

As I walked up to the counter, I drawn immediately to the display case that held the cupcakes.  Three rows of beautifully displayed cupcakes.  10 different flavors.  How was I going to choose? Oh wait… why choose?  Just get one of each!  So excited to taste my favorite little treats, I forgot to see how much they cost.  Now… I planned to spend a few dollars at Wink today, but I guess I wasn’t expecting the $36 a dozen price tag for these little puppies.  EEEEK. At this point, I’m crossing my fingers they are worth it!

So we sit down with our loot, eager to take a bit out of each one.  Here’s the run down of what we got. 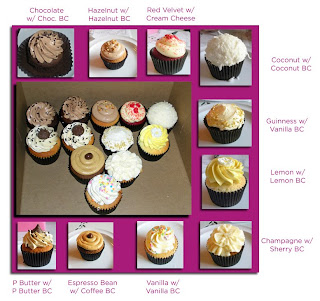 Now on to the taste testing! Emily wanted to try the Peanut butter with Peanut butter buttercream first.  The base of this cupcake tasted so much like a peanut butter cookie.  Mmmmm it was good.  The frosting was creamy and smooth and topped perfectly with a kiss!

Jen and I tried the Chocolate with Chocolate buttercream next.  It had a very intense, distinct coffee flavor in both the frosting and the cake.  If you like coffee flavor, you’ll love this cupcake.  It wasn’t your typical chocolate flavor, yet still very tasty!

We also tried the Red Velvet with Cream Cheese frosting and the Coconut with Coconut buttercream as well as the Hazelnut with Hazelnut icing.  All very different in their flavors! The Red Velvet had the moistest cake of all of the flavors we tired while the Hazelnut had the most distinct true to their name flavor. By the time we got to the Coconut, we were on cupcake overload and could only finish half of it!

And this is what you look like when you’ve eaten too many cupcakes.  Oohhhh my belly! 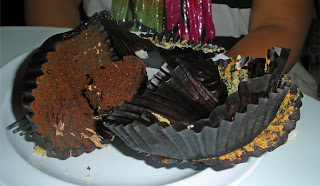 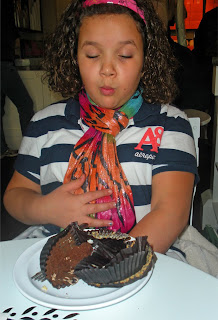 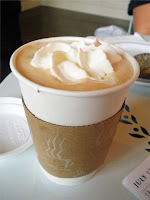 We spent almost 2 hours in Wink Cupcakes, enjoying the decor, the friendly people, and the tons of customers coming in and out of the shop.  As we were enjoying our cupcakes, one of the Wink staffers brought us a complimentary Buttercream Latte! Such a sweet surprise! Thank you!

Overall, we had a really great experience at Wink.  It was just what a cupcake shop should be… fun, sweet, and yummy! There were a few things that I’d like to see differently at Wink that I think could really make this cupcake shop a HUGE success!

First, their buttercream frosting was almost too sweet and smooth, airy and light.  When I think of a standard buttercream, I like a thicker, more “meaty” buttercream.  Wink’s frosting was a little too smooth and light for my taste.  Now…. if you like this type of buttercream… then Wink is the place for you! It was good, just not my ideal for a cupcake.

Second, the size of their cupcakes were surprisingly small.  For $3 a “wink” sized cupcake and $36 a dozen, I would expect a slightly bigger cupcake.  Some of the cupcakes we sampled didn’t even rise up over the edge of the liners, being only about an inch or so tall.  Having tasted so many cupcakes and been to so many cupcake shops, these by far were the smallest cupcakes for the price.

Lastly, with the exception of the Red Velvet cupcake, every cupcake we tasted was slightly over cooked and dry.  When I pulled away the liners from the cakes, I could see a lighter color on the inside of the cupcake than the browned outer edges.  This was a little disappointing.  With each bite of a new cupcake, I was hoping that I’d find more moistness in them… but, I didn’t.  I’m hoping that they can tweak their cupcake recipes so that these beautiful little gems can be as moist and delicious as they look in the case!

Now… don’t get me wrong, despite these three things… I thought that Wink Cupcakes was a big success!  I had a great time up on Queen Anne hill at Wink and I’d definitely stop back in if I were in the area! And… if they ever start selling their T-Shirts in “big girl” sizes and online… I’ll be buying one!  Oh… and get this, the glass window said, “Please refrain from licking the glass!” hehehehe Thanks Wink Cupcakes for being such great hosts to our visit! My daughter and my best friend and I had a really great afternoon in your shop!

Here are a few extra fun pictures from our afternoon at Wink! 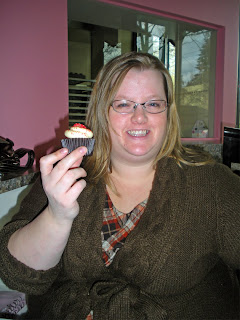 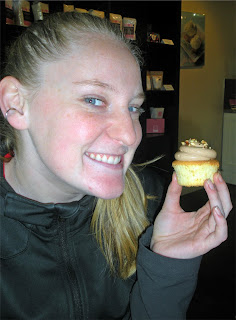 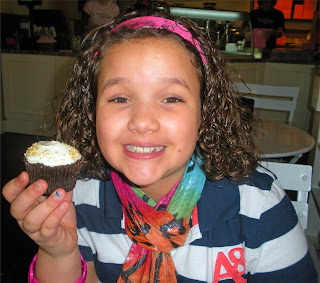 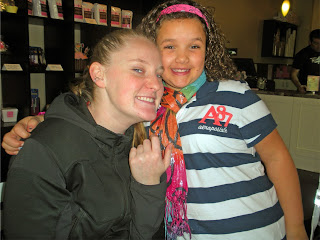 cute logo and a great variety. love the pics of the kids!

The store looks so cute, not overly impressed with the cupcakes but I would love to try them some time!Thanks for posting!