Rhubarb, what is rhubarb exactly? I’ve asked myself this dozens of times and to be honest, I still don’t have the answer. I asked a bunch of my friends on Twitter and they said it’s a tart veggie, but it’s used almost like a fruit it pies, jams and muffins and such. *humph* I still don’t know about this rhubarb.

So I thought… hmmm, could I do a rhubarb cupcake? I found only TWO recipes for this online… one of which was WAY too complicated. So, I settled on the simpler recipe from Coconut & Lime. This recipe is a basic vanilla cupcake (very flavorful!!) with chunks of tart rhubarb in it. It’s then topped with a marshmallow frosting made with a rhubarb based simple syrup. It’s really quite easy to make and the frosting really completes the cupcake!

I brought them to class today and EVERYONE was surprised and delighted that they were made with rhubarb and were a big hit!! They ooooh and awwwwed and said they were delish!! (Especially the frosting!) 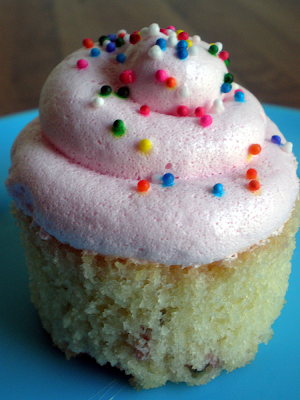 See the chunks of rhubarb?? Yummmy!!! 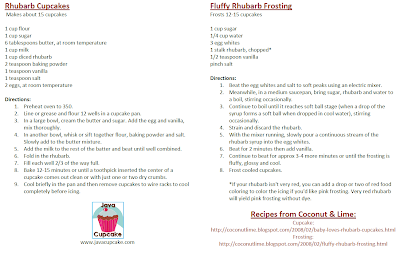 *PS*
My mom emailed me this recipe for a yummy rhubarb recipe. It’s not a cupcake, but it still looks good!! I can’t wait to try it!

Directions:
Preheat oven to 350 Degrees F.
In a 10x6x2 in baking dish, combine the first 6 ingredients.
Cream the butter with the flour and brown sugar.
Stir in the oats.
Sprinkle over the rhubarb.
Bake in a moderate oven for 40 minutes or until the rhubarb is tender and the top is brown.

101 Ways to THANK a Military Spouse